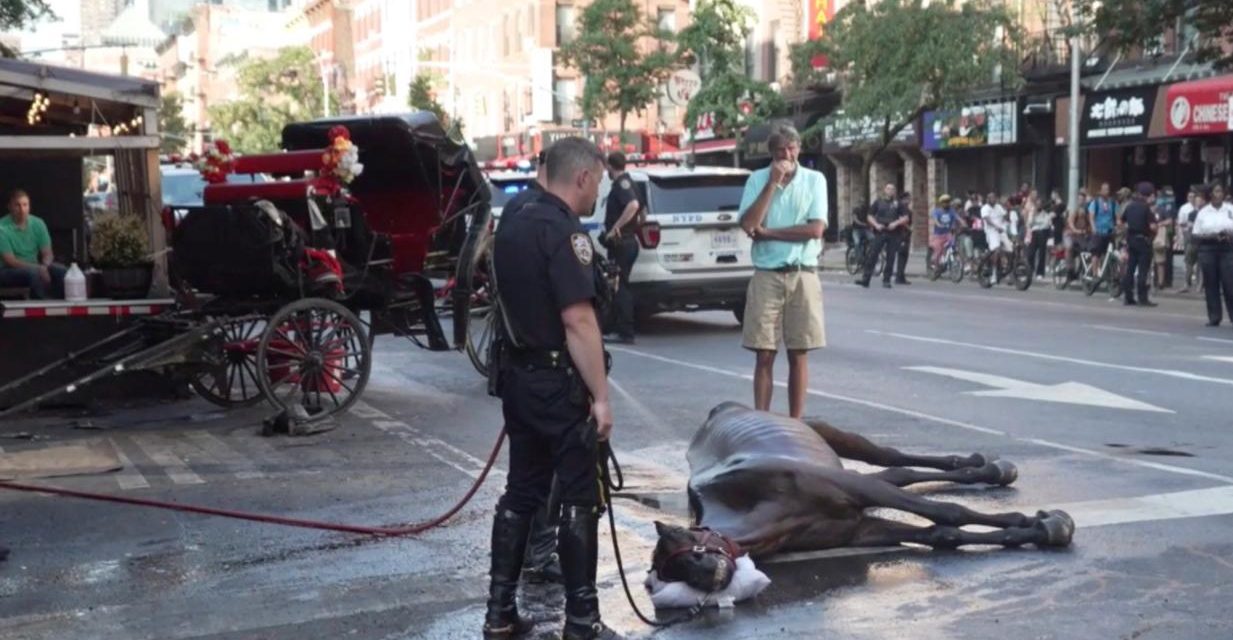 Ryder, a horse used in the New York City carriage industry who collapsed in August, has been euthanized after veterinary exams revealed advanced age and “serious medical conditions,” according to a joint press release from three horse welfare nonprofits.

Following Ryder’s collapse on a Manhattan Street in August, a new guardian obtained the sick horse from his previous owner at the NYC carriage horse stable and consulted with numerous veterinarians, according to the press release from Equine Rescue Resource, The Sanctuary at Maple Hill Farms, and The Unbridled Heroes Project.

Ryder was also evaluated at Cornell Equine Hospital, where veterinary staff determined he had numerous serious medical issues that — combined with his advanced age — led to his euthanasia, according to the press release.

“We urge all those who have been inspired by Ryder to continue your efforts in assuring the health, safety and humane treatment of all animals,” the press release concludes.

The video of Ryder’s collapse that went viral showed driver Ian McKeever hitting the fallen horse and saying, “Get up! Get up!” An investigation subsequently revealed that Ryder was suffering from the neurological condition Equine Protozoal Myeloencephalitis (EPM), appeared malnourished, and was also much older than claimed on his records — which said Ryder was 13 years old,  whereas veterinary officials have estimated Ryder likely was between the ages of 28 and 30. In New York City, it’s against the law for horses older than 26 to be used for carriage rides.

TWU Local 100, a union that encompasses horse-drawn carriage workers, told news that Ryder’s situation was “an isolated incident” that “absolutely is not representative of the entire horse-carriage industry.”

But a growing number of organizations, individuals and celebrities, including Billie Eilish and Kaley Cuoco, are calling out the cruel horse-drawn carriage industry and demanding an end to the horrific practice in New York City, according to an open letter spearheaded by nonprofit Animal Legal Defense Fund.

The letter notes that while Ryder was an individual horse, his situation is “not unique.”

“Tragic outcomes for horses haunt New York City’s history,” the letter notes.  “Horses, carriage passengers, pedestrians, cyclists and others are put at risk by this cruel and reckless industry. We say: No more.”

Ryder’s death also has spurred legislators to propose legislation that could ban horse-drawn carriages in the city.

Intro 573, introduced in July, would prohibit the issuance of new horse-drawn carriage licenses, phase out existing carriages by June 1, 2024, and usher in electric vehicles as a more compassionate alternative.

Manhattan District Attorney Alvin Bragg is continuing an investigation into Ryder’s care while in the city, according to news reports.

If you haven’t already, please sign our petition supporting Intro 573 and a ban on brutal horse-drawn carriages in New York City.