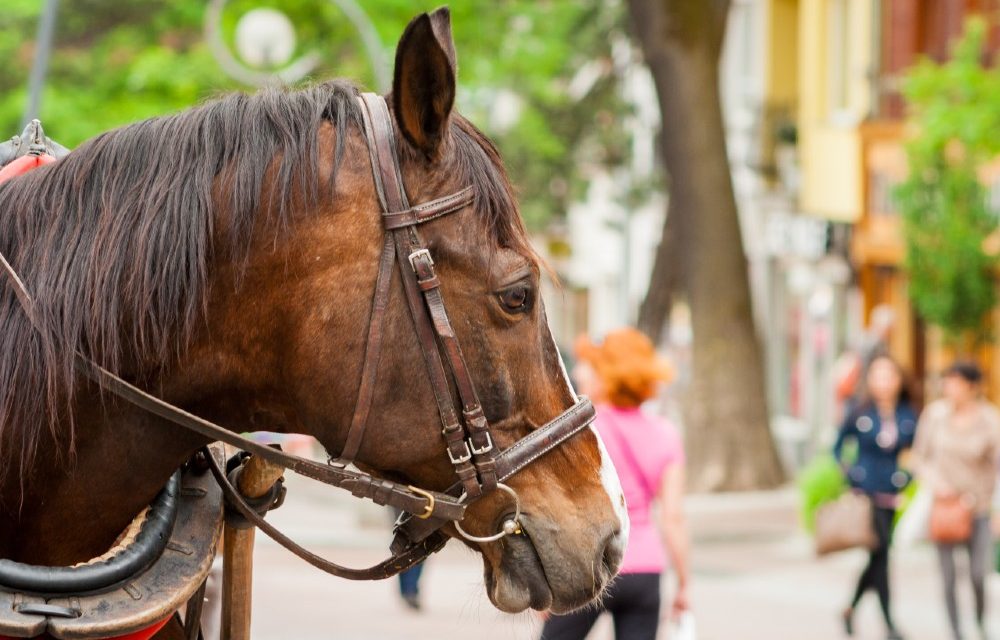 UPDATE (9/6/2022): The New York City Council referred the bill, Int 0573-2022, to the Committee on Health in July, where it remains. We’ll keep watching this case. —Lady Freethinker Staff

An exhausted horse used for carriage rides forced to haul tourists during a summer heat wave in New York City collapsed and laid in the hot and noisy roadway for almost an hour without veterinary care — the latest victim of a cruel industry that must be banned.

The horse, named Ryder, fell in Hell’s Kitchen during rush hour in Manhattan and couldn’t stand, despite being reportedly whipped by the driver, who ordered the horse to “Get up! Get up!”, according to news reports.

Horrified onlookers told local news that Ryder was bleeding and appeared malnourished and dehydrated. Authorities who arrived on the scene doused the suffering animal with water in an attempt to lower his body temperature and also administered a shot of adrenaline. When the horse could finally stand, he was taken to a veterinarian for emergency treatment, with news reporting numerous wounds visible following his collapse.

Reports also note that bystanders witnessed the horse in distress and having trouble walking hours before the incident.

A spokesperson for the industry denied allegations of overwork or abuse, attributing the collapse to an underlying neurological disease – but failed to explain why a sick horse was being forced to work in the first place.

Over the years, casualties involving horses exploited for carriage rides have included horses who have collapsed and died as well as animals who have been hit by vehicles or run into vehicles on the busy streets.

Recognizing the inherent cruelty of having defenseless horses haul people around a densely packed, modernized city, City Councilman Robert Holden has proposed a bill to replace horse-drawn carriages with low-speed, electric carriages by 2024.

The bill would give current horse-drawn carriage drivers preference for the new licenses and also would require that they be paid prevailing or union wages set by the city comptroller.

There’s nothing charming or romantic about horses suffering and dying so tourists can take a turn around a densely populated, modern city.

Switching to electric vehicles is a winning solution that would maximally look out for animal welfare while also ensuring drivers can maintain a living wage. Many other cities, including — Key West, Florida; Salt Lake City, Utah; and Chicago, Illinois— have already banned horse-drawn carriages. It’s time for NYC to join them, and show the world that it has compassion, as well as class and character.