PETITION UPDATE: Friendly Bear Cub May Soon Be Released Back Into the Wild 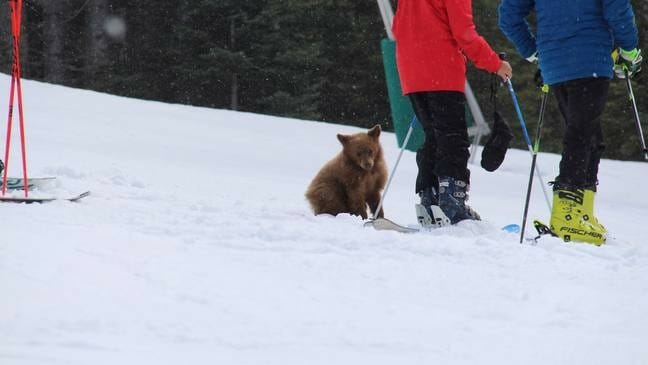 In an update coming directly from The California Department of Fish and Wildlife (CDFW), Lady Freethinker has heard that the friendly bear cub who gained fame interacting with snowboarders in a viral video is doing well, and experts are hoping they can soon return him to the wild.

Thank you to all who signed our petition urging the CDFW to spare the cub’s life! The petition garnered more than 24,000 signatures, and sent a message that everything possible must be done to save this sweet animal.

The CDFW captured the bear in Northern California in April and has been caring for him ever since at a facility near Sacramento.

In the update, Kirsten Macintyre, communications manager of the CDFW, informed Lady Freethinker about the cub’s current condition: “Our wildlife vets are extremely experienced and compassionate, and are trying different treatments to see if they can improve the bear’s health to the point where he can be safely released back to his natural habitat,” Macintyre explained.

“If that turns out not to be possible, permanent placement in a sanctuary setting will be considered. The good news is that the bear is currently doing well, other than the head tilt. He’s eating well, gaining weight, and responding well to treatment for an ear infection.”

When first captured, the bear was underweight, and experts suspected he had neurological issues due to his abnormal behavior and ongoing head tilt. Unfortunately, CT scans and other tests have not yet revealed the cause of these abnormalities, making it difficult to plan for his future.

“Until the cause of the head tilt is understood, it’s premature to explore long-term solutions such as placement or release,” CDFW spokesperson Kyle Orr told the Reno Gazette Journal.

Ideally, this little bear cub will be released back into the wild; however, if this isn’t feasible due to health or behavioral issues, a suitable sanctuary will be located.

To increase the chances of a successful release should the time come, the wildlife experts caring for the bear ensure he has minimal human contact and are able to observe him without his knowledge. “His exposure to humans continues to be intentionally limited by our staff in order to keep him as wild as possible,” said Orr. “That’s in his best interest.”