Such a sweet update from The Wild Animal Sanctuary in Colorado! Two rescued bears who were taken in by the sanctuary several months ago are now thriving in their new home.

Ben and Bogey were rescued after PETA (People for the Ethical Treatment of Animals) filed a lawsuit against a roadside zoo in North Carolina and it’s horrific living conditions. The unaccredited zoo kept these bears living in filth and squalor while neglecting their many medical needs. 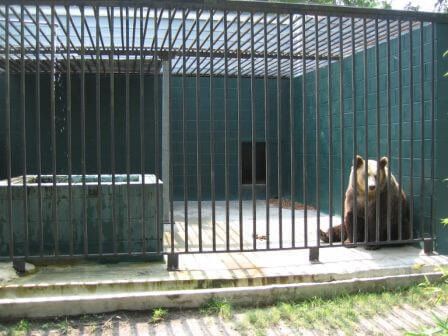 Bogey the bear was forced to live in a small cage at a roadside zoo before she was rescued.

Locked all alone in a small cage at the zoo, sweet Bogey the bear paced incessantly back and forth, obsessively licked her paw, and bit at the bars of her cage. These are all signs of extreme psychological distress in captive animals. Meanwhile, darling Ben the bear had untreated facial lesions that left him with scarring on both corneas, and suffered from painful arthritis that prevented him from walking well. As the lawsuit dragged on, the zoo owners finally admitted that they were unable to care for the bears properly, and agreed to release them to sanctuary.

Once the two bears were transported to Colorado, they could finally get the much-needed medical care that they required. The most urgent priority was Ben, who was suffering from severe lesions on his eyes, nose, and mouth. The veterinary team had to perform several intensive medical treatments just to get Ben’s medical situation under control. Although Ben is finally doing much better, the damage to his eyes was so significant that his corneas were permanently scarred and his vision is likely impaired. 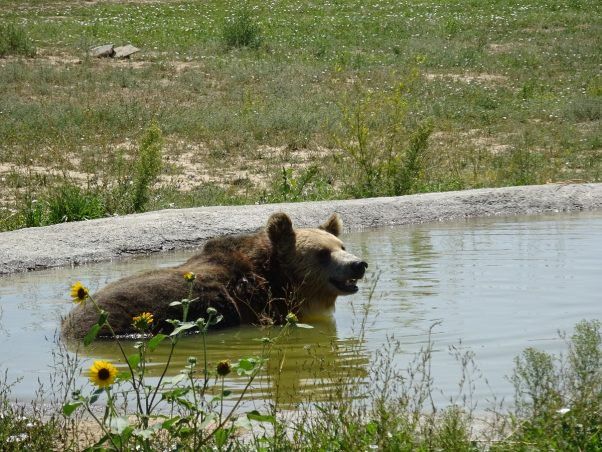 Bogey the bear now enjoys her new life at The Wild Animal Sanctuary in Colorado.

Recently, PETA checked in on the bears to see how they were doing in their new sanctuary home. As you can see in the video above, these lovable bears have left pain and sorrow behind them, and are now living their best lives! Darling Ben receives expert veterinary treatment and is able to splash and play in a pond and explore and forage in the grass. Sweet Bogey no longer shows any signs of discomfort or distress. Instead, she swims and plays, and even bobs for apples at her leisure.

If the zoo tries to imprison any more bears in the future PETA can take them back to court, so hopefully the tourist attraction will not try that again. It’s so wonderful to see sweet Bogey and darling Ben are finally happy and healthy at their forever home in Colorado!