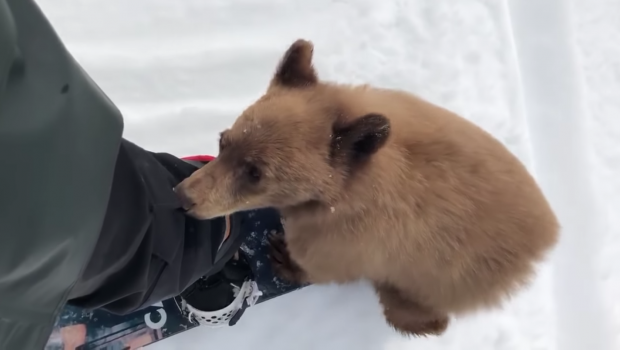 UPDATE: Deemed unfit to be released back into the wild due to a persisting head tilt, this sweet bear – named Northstar after the snow resort where he was found – will live happily and safely at the Fund for Animals Wildlife Center in Ramona, San Diego County. Thank you to everyone who signed the petition urging the California Department of Fish and Wildlife to save this sweet bear’s life.

A sweet bear cub may lose his life after he innocently approached a group of snowboarders in Truckee, California.

According to News 4, the cub, whose mom may have died, was looking for food when he discovered newfound friends on the slopes. The bear was extremely friendly, and a video of the encounter is going viral on social media.

This behavior is out-of-character for most bears, and the California Department of Fish and Wildlife has taken the cub in for evaluation.

Soon, they will determine if the bear will be sent to a sanctuary or put down.

“They were feeding him, handing her sandwiches, in other words taming him…he’s old enough, almost, to be alone, but he’s still dependent. And now, he’s dependent on people,” said Ann Bryant, executive director for the Bear League, a non-profit dedicated to keeping bears safe and wild in their natural habitat, to News 4.

Sign this petition urging The California Department of Fish and Wildlife to spare this innocent cub and send him to a sanctuary where he can gain independence, roam free, and live a safe and happy life.