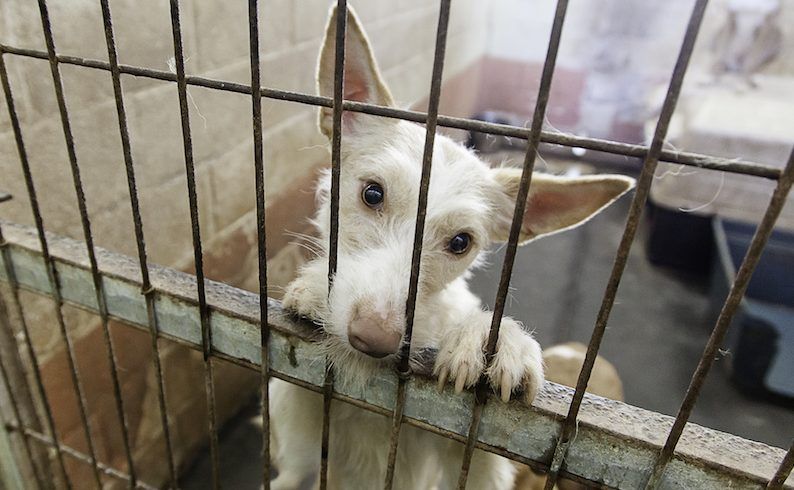 UPDATE (1/17/2023):  Our petition, which was signed by more than 20,000 people, was hand-delivered to the mayor and city council members. Thank you so much to everyone who signed! We’ll keep doing all we can for animals. —Lady Freethinker Staff

Every day in Gunsan, South Korea, dogs are tortured, kept in deplorable conditions, and slaughtered before being sold for meat or supposed “medicinal elixirs.” These dogs are murdered in ways that would shock anyone, animal lover or otherwise. They are electrocuted, viciously hanged, and cooked alive in pots of boiling water.

The dog meat industry is rampant in this city; a simple search reveals 36 dog meat restaurants and 242 “health food shops” known for selling dog elixirs in and around Gunsan.

The dog farms and the slaughterhouses where these dogs spend their final hours are appalling. Caged, helpless, dogs look on in horror as their cage-mates are beaten and executed. Many of these dogs were former pets.

The dog meat ends up in restaurants and markets across Gunsan and these slaughterhouses operate in broad daylight, in full view of the public.

The dog industry here routinely violates S. Korean laws regarding the processing of food waste, environmental damage due to excrement, the means of slaughter, and more. But sadly, the indifference of lawmakers and citizens alike has allowed this industry to flourish without oversight.

Sign this petition to urge Mayor Kang Im-June and the Gunsan City Council members to uphold the law and stop the dog meat trade in this city.

It’s time to end the cruelty once and for all.