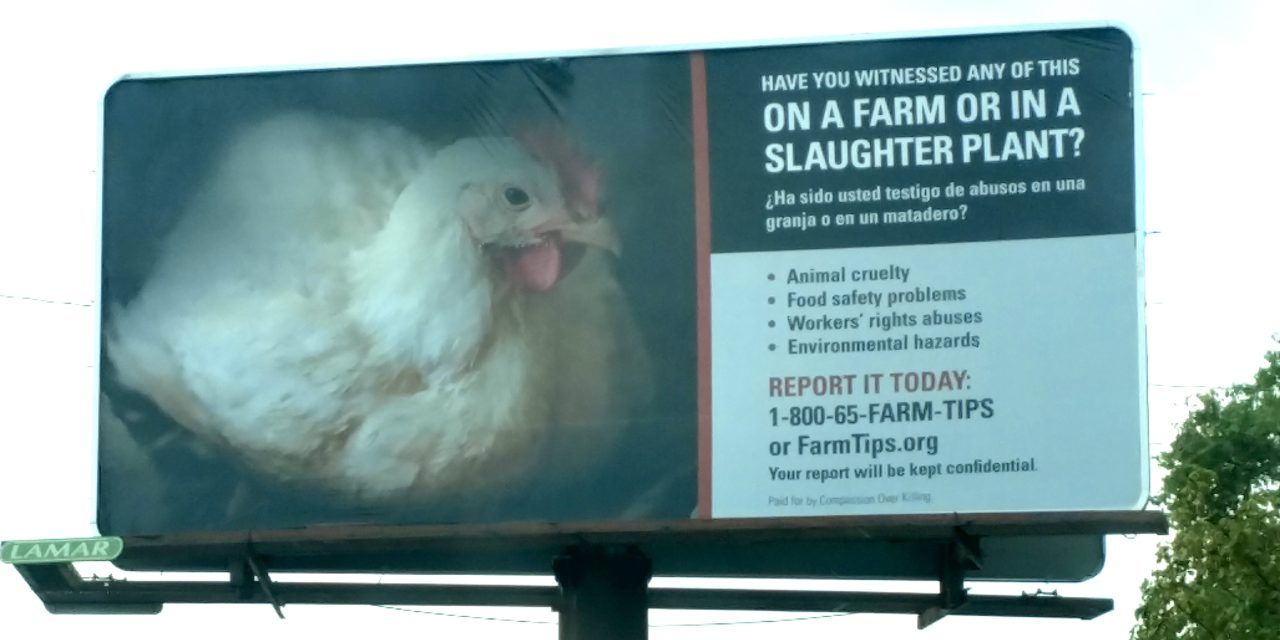 On Wednesday, non-profit animal advocacy organization Compassion Over Killing (COK) announced the launch of an innovative new way for whistleblowers to report animal cruelty, workers’ rights abuses, food safety risks, and environmental violations on farms and slaughterhouses without fear of being identified or persecuted. The confidential hotline, 1-800-65-FARM-TIPS, allows concerned citizens to call whenever they spot injustice. They can also file a confidential report online at FarmTips.org.

The hotline has been featured on billboards throughout major animal agriculture states Arkansas and Georgia, reaching approximately 300,000 people so far. Additional billboard locations are set to be unveiled in North Carolina. These are some of the top poultry-producing locations in the country, and both Arkansas and North Carolina have passed ag-gag laws that prohibit undercover investigations on animal facilities. These unconstitutional laws allow animal cruelty and workplace violations to exist in plain sight without fear of discovery or legal consequences.

“For far too long, animal agribusiness has operated with limited public and legal scrutiny by keeping its rampant abuses hidden behind locked and closed doors,” COK Executive Director Erica Meier told LFT. “The only glimpse we have inside the painful realities of meat, milk, and egg production are whistleblowers who take a stand to expose the truth.”

But many whistleblowers are silenced out of fear.

“Factory farm employees can be hesitant to report animal abuse and other violations that they witness, for fear of losing their jobs,” said Meier. “This hotline empowers these concerned workers to come forward, providing them with a safe and anonymous way to report animal cruelty, workers’ rights abuses, and environmental harm.”

Once a whistleblower makes a report through the telephone hotline or website, COK reviews the claim to determine the appropriate response and action. Every claim, no matter how small, has the potential to prevent cruelty within agribusinesses.

The forced secrecy surrounding factory farms and slaughterhouses has largely left the public in the dark in terms of animal cruelty and workplace violations, especially regarding factory farmed chickens. Recent polls have illustrated that up to 77% of poultry consumers would not eat chicken that had been slaughtered inhumanely, yet many remain unaware of how the chicken on their plate has been raised or killed.

If you witness any instances of animal cruelty, abuse, or workplace violations within a farm animal facility, don’t hesitate to report your claim through COK’s telephone hotline or website. Your anonymity is guaranteed, and you can make a difference in the way animals and workers are treated.