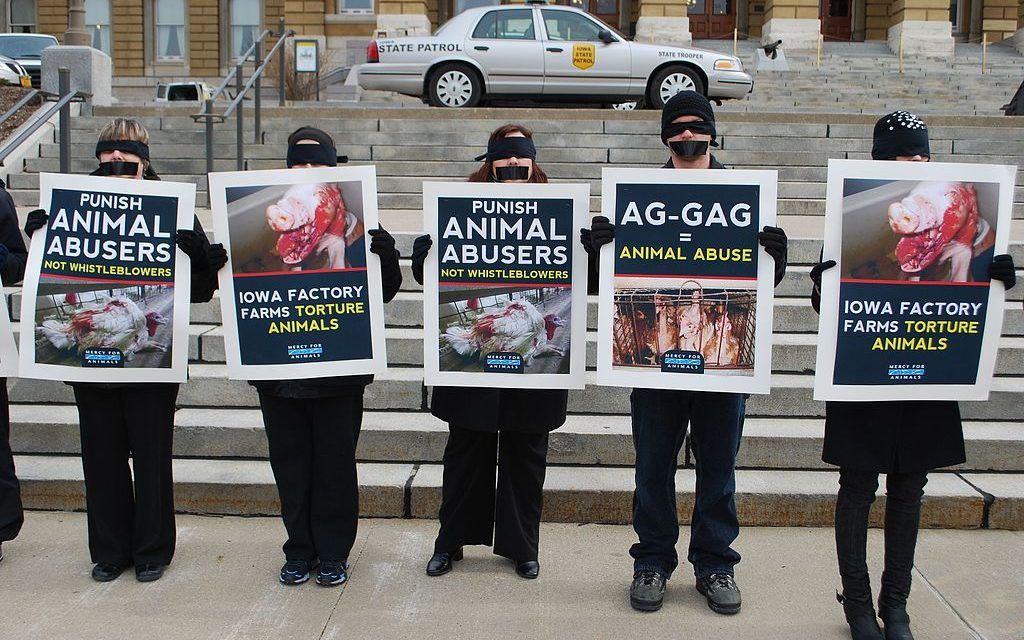 By Mercy For Animals (MFA), via Wikimedia Commons

Animal activists won a major victory in Utah when a federal judge struck down a 2012 ‘ag-gag’ law. The law prevented citizens from entering an agricultural facility under false pretenses and recording operations — making undercover investigations into animal cruelty on factory farms or puppy mills impossible.

According to U.S. District Judge Robert Shelby’s ruling, the ‘ag gag’ law is unconstitutional because it violates free speech.

“Utah undoubtedly has an interest in addressing perceived threats to the state agricultural industry, and as history shows, it has a variety of constitutionally permissible tools at its disposal to do so,” wrote Judge Shelby in his memorandum decision and order. “Suppressing broad swaths of protected speech without justification, however, is not one of them.” 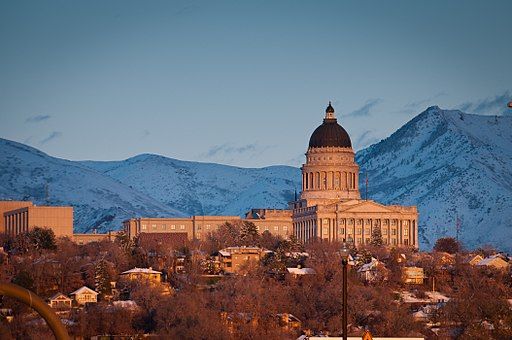 The court decision is a major win for animal rights activists, who were specifically targeted when creating the law. This is also the first case ever filed to challenge ‘ag-gag’ laws.

Based on the rhetoric by proponents of the law, Judge Shelby noted that, “What the Act appears perfectly tailored toward is preventing undercover investigators from exposing abuses at agricultural facilities.”

Specifically, the bill’s sponsor Senator David Hinkins stated that “’vegetarian people [are] trying to kill the animal industry.” He cited this as justification for the bill, saying that is “’what we’re trying to prevent here.’” However, he wasn’t the only one to speak out against animal activists. Farmers also promoted the bill to protect their industry.

Animal Legal Defense Fund (ALDF), People for the Ethical Treatment of Animals (PETA), and Amy Meyer initiated the lawsuit in 2013 after Amy Meyer was charged with a class B misdemeanor for violating the law. She “illegally” filmed a sickly cow at Dale T. Smith & Sons Meat Packing Company in Draper, Utah. Although the charges were dropped, the incident served as a catalyst.

“Utah’s now-defunct ‘ag-gag’ law sought to keep cruelty to animals a big secret that only the profiteers could see. It was a blatant violation of free speech and freedom of the press,” PETA wrote in an article after the victory. “It sought to punish the whistleblowers and eyewitnesses who expose inhumane and illegal conduct on factory farms and at slaughterhouses—instead of going after the people who commit these crimes. 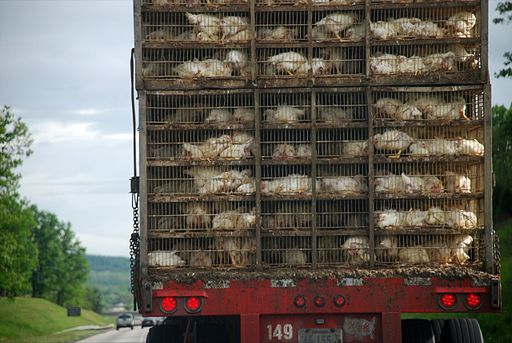 Picture by ben (originally posted to Flickr as Nugget Truck) CC BY 2.0, via Wikimedia Commons

According to the Humane Society, although they can take many forms, ‘ag-gag’ laws target whistleblowers. The laws originated as an attempt to combat negative publicity by animal rights activists in the 1990s.

As Judge Shelby described in his memorandum, several undercover investigations revealed disturbing animal abuse such as male chicks being ground up alive, calves being skinned alive, and much more. Needless to say, these videos negatively affected the agricultural industry. After the ensuing cruelty cases and public outcry, agriculturalists reacted by pushing for ‘ag-gag’ laws. Now, 16 states have passed laws similar to the one that was struck down in Utah.

Although the case is a major win for activists and investigators, Judge Shelby’s ruling looked strictly at the law, which is more focused on human rights than animal rights. The court struck down Code §76-6-112, because it violates freedom of speech.

The defendants, the Governor and Attorney General of Utah, argued that the law did not violate free speech and was meant to protect agricultural workers and animals. However, there was no evidence to support his claim.

The First Amendment Protects Some Forms of Lying

The judge also remarked that the law is too vague. The wording of the law, which criminalizes gaining “access to an agricultural operation under false pretenses,” violates some forms of free speech. According to the judge, even if someone lies to access a facility, it isn’t considered trespassing (which is illegal) unless there is also harm, such as property damage.

As for recording videos on private property, the judge firmly stated that “it appears the consensus among courts is that the act of recording is protectable First Amendment speech.” He went on to say that if recording videos weren’t protected, “the State could criminalize, for example, creating music videos, or videos critical of the government, or any video at all, for that matter, with impunity.”

The First Amendment Protects Speech Even on Private Property 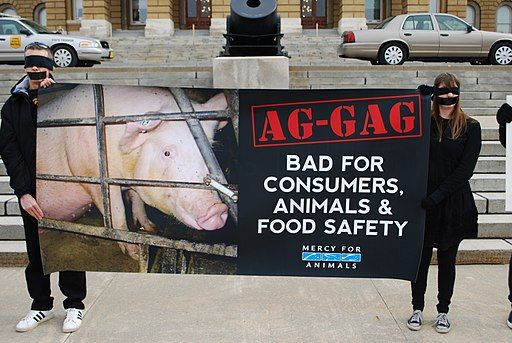 Picture by Mercy For Animals MFA from Los Angeles, USA via Wikimedia Commons

While this may be the first case to challenge ‘ag-gag’ laws, it isn’t the only one. Another case, also filed by PETA and ADLF, is pending in Idaho and already passed the district court.

“These unconstitutional laws will fall like dominos,” says Stephen Wells, executive director of the Animal Legal Defense Fund in a statement. “Ag-gag laws are flagrant attempts to hide animal cruelty from the American people, and they unfairly target activists trying to serve the public’s interest.” 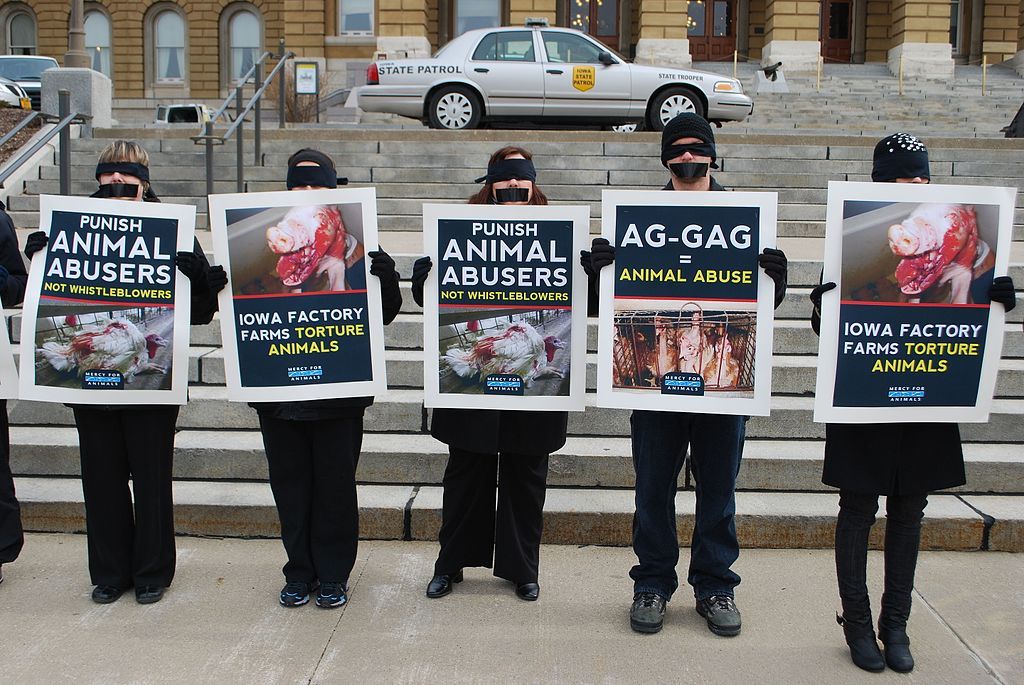