New Billboard Asks You to Choose Compassion This Holiday Season 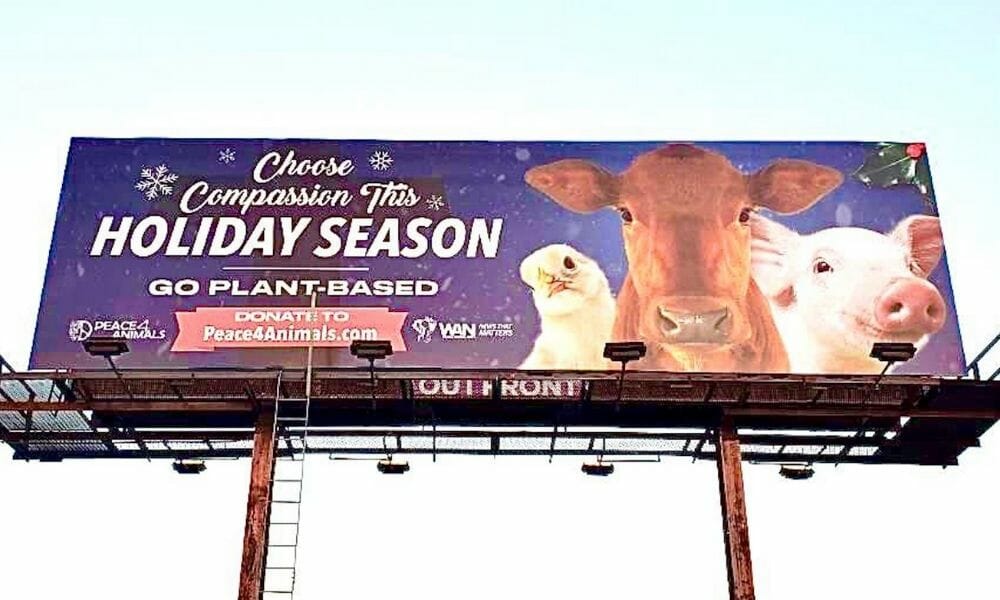 Non-profit organizations Peace 4 Animals and World Animal News (WAN) are urging people to make cruelty-free choices over the holidays. A new billboard — which stands in Los Angeles County along the busy I-5 Santa Anna Freeway — features a turkey, cow, and pig next to the campaign’s slogan: “Choose Compassion This Holiday Season, Go Plant-Based.”

“If 2020 has taught us anything, it is that significant changes must be made in order to save our planet and all the sentient beings that inhabit it,” Founder and President of Peace 4 Animals and WAN Katie Clearly said in a press release. “There needs to be a cultural shift in the United States and throughout the world to change the way we are conditioned to think about farm animals — one that includes recognizing animals as individuals, not food for human consumption.”

The billboard follows a prior campaign that Peace 4 Animals and WAN launched last month, encouraging people to adopt a turkey for Thanksgiving instead of eating one. Also located in Los Angeles County, the ‘Save A Life This Thanksgiving, Adopt A Turkey’ billboard will remain up through the month of December — a time when Cleary says 22 million turkeys are killed for their meat, in addition to the estimated 46 million turkeys who are slaughtered just for Thanksgiving Day.

Millions of pigs are also slaughtered every December during the holidays. Before ending up on people’s dinner plates, pigs suffer in overcrowded enclosures, where they can barely move and grow unnaturally large. Many are killed as young as six months old, and females are forced to give birth to as many as 70 piglets before their bodies can’t physically handle pregnancies, at which point they’re slaughtered for their meat.

These initiatives remind us that by transitioning to a plant-based lifestyle — even if only for one holiday meal — we can save animals’ lives.