In California Court Win, Miyoko’s Creamery Allowed to Use ‘Butter’ in Labeling 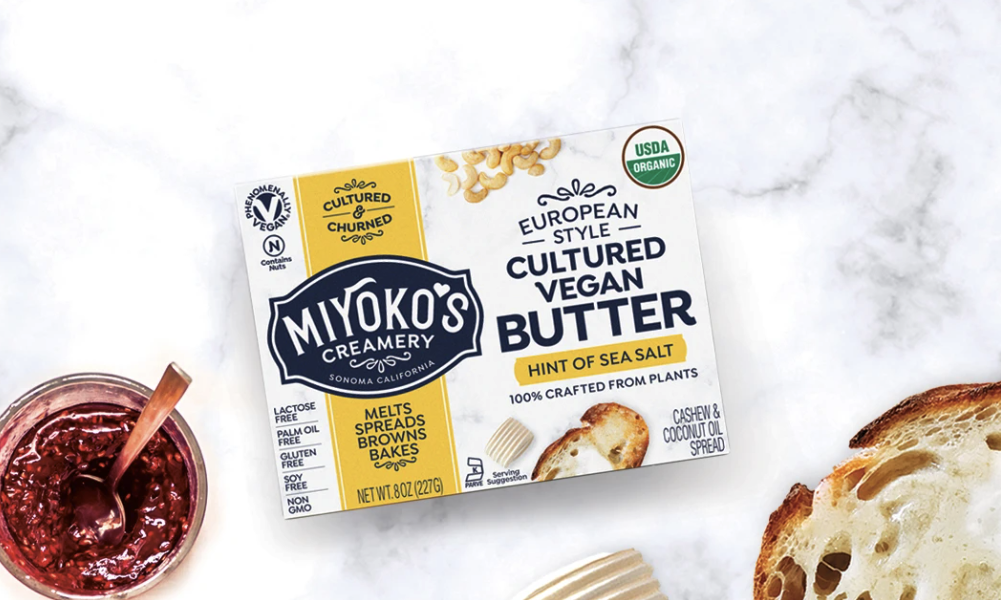 The company also can keep text declaring the products as “cruelty free” and “lactose free” on the packaging, according to the court ruling from the U.S. District Court in Northern California.

Schinner, recognized as the “queen of vegan cheese” for her multi-million dollar plant-based franchise Miyoko’s Creamery, received a letter in 2019 from the California Department of Food Agriculture, telling her to stop using terms like “butter” on her products — even though her packaging also included qualifiers like “vegan” and “plant-based,” as allowed by U.S. Food and Drug Administration regulations.

Similar challenges have been lobbied against other plant-based companies nationwide, often by leaders in the meat and dairy industry, as purchases of plant-based products increase and dairy sales decline.

Represented by the Animal Legal Defense Fund (ALDF), Schinner sued in 2020, telling the state that their labeling directives violated her constitutional rights of free speech. A district court judge granted a preliminary injunction that same year — effectively allowing Miyoko’s Creamery to keep the language while the lawsuit progressed.

Then, in August, came the judge’s final ruling, and a joyful announcement from the Creamery team.

“Yes, our vegan BUTTER is CRUELTY FREE,” Miyoko’s Creamery posted to its Facebook page. “No cows are harmed in the making of the most delicious butter on the planet.”

Miyoko’s also posted a picture of a victory cake, coated in vegan buttercream frosting, to celebrate the legal victory.

ALDF, which has been at the forefront of demanding and enforcing fair regulation of plant-based foods, also commended the judge’s ruling.

“The fact that animal-milk producers fear plant-based competition does not give state agencies the authority to restrict one industry in order to help another,” said Stephen Wells, ALDF’s executive director.

While Miyoko’s cannot include the words “hormone-free” or “revolutionizing dairy with plants” on its packaging, also per the court ruling, Schinner said the ruling sets a legal precedent for the future of plant-based food.

“Food is ever-evolving, and so too, should language to reflect how people actually use speech to describe the foods they eat,” she said in a statement. “We are so thrilled by this ruling and what it means for the future of food.”

Schinner encouraged people to celebrate with her by snapping selfies with their favorite Miyoko’s vegan butter products and posting them to social media.

For a limited time, Miyoko’s also will be allowing customers to pick up some free vegan butter with their other online purchases to celebrate the legal victory.

Customers whose carts total $35 or more can add a pack of European Style Cultured Vegan Butter for free by using promo code FREESPEECH at checkout through Aug. 30.

“This victory sets a pivotal precedent for the entire vegan food movement, so let’s shout it from the mountain tops!” Miyoko’s exclaimed in a newsletter announcing the victory, under a banner of text that read, “Free Butter To Celebrate Free Speech.”