Investigation Reveals the Horrifying Truth Behind Your Turkey Dinner 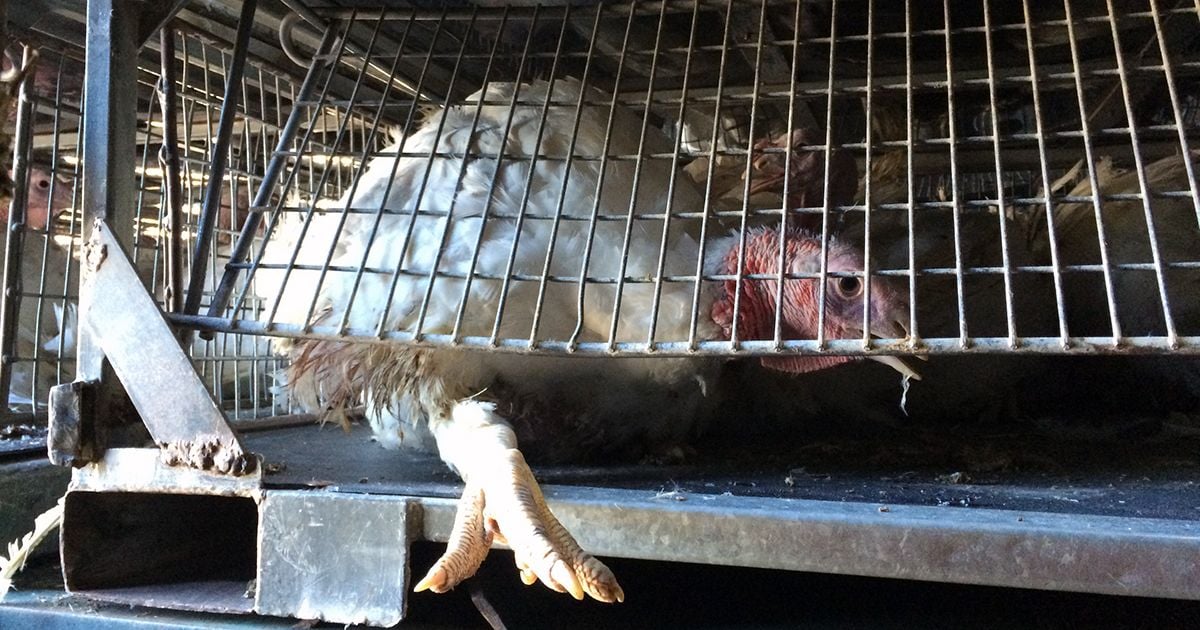 Abused turkey at Lilydale, courtesy of Mercy for Animals

Thanksgiving is only a few weeks away, but a new, horrifying investigation by Mercy For Animals (MFA) reveals the suffering nearly all turkeys endure before they reach your dinner plate.

MFA, an animal rights organization that focuses on farmed animals, investigated Lilydale, one of the largest poultry slaughter companies in Canada. An MFA undercover investigator captured the brutal process on hidden camera.

The horrors of Lilydale’s slaughterhouse are shocking

“At Lilydale, workers yanked turkeys out of transport crates and violently shackled them upside down on the slaughter line,” MFA Vice President of Investigations Lindsay Wolf told Lady Freethinker. “Severely sick, injured, and dying turkeys were sent through the slaughter line along with other birds intended for human consumption.”

The violence of turkey slaughter goes much deeper, lasting from birth until their death.

“Frightened birds were then dragged through an electrified vat of water, painfully shocked but still conscious and able to feel pain,” said Wolf. “Birds also had their throats cut open, their heads ripped off, and were even scalded alive in hot water tanks.”

These were just the worst instances of abuse, and hardly begin to cover the extent of the birds’ poor treatment. Unfortunately, the lack of care for farm animals is all too widespread.

“Perhaps the most sickening part about the animal torture we documented at Lilydale is that all of it is considered normal at turkey slaughterhouses across North America,” Wolf explained. “This isn’t a matter of Lilydale failing to meet industry standards, it’s a matter of industry standards allowing for blatant animal abuse.” 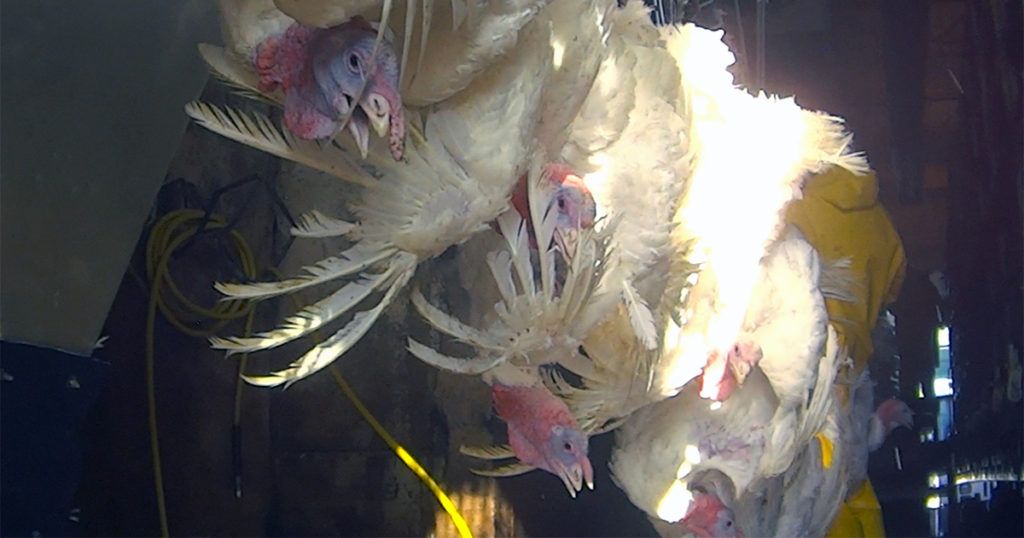 Turkeys are hung upside-down alive, sent down a conveyor-type line, soaked in electrically charged water, sent through a cutting blade, and finally boiled. Picture courtesy of Mercy For Animals.

An estimated 300 million turkeys are killed each year in the U.S. alone, 15 percent of whom are killed just for Thanksgiving. Most live their short lives in terrible conditions, especially because there are few federal protections to regulate the poultry industry. They are not even covered in the bare-bones Humane Slaughter Act, which grants rudimentary welfare protections to cows, pigs and other livestock (who still suffer greatly themselves).

“Turkeys are treated as mere meat producing machines,” said Wolf. “From the day they hatch until they are violently killed, their short lives are filled with misery and deprivation.”

Wild turkeys like to forage in forests, eating nuts, seeds, fruit, and insects. They live around 12 years and weigh around 18 pounds. 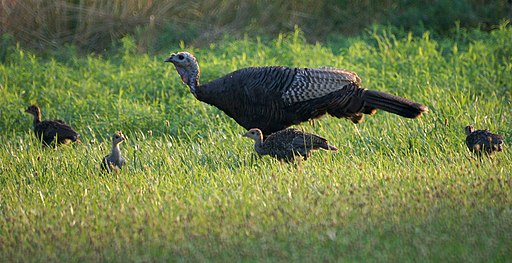 For turkeys raised on factory farms, it’s a much different story. Turkeys bred on farms are genetically modified to grow much more quickly. They only live about a year at the most, but can weigh 35 pounds. This makes them so large that they often die from the stress their unnatural weight puts on their organs. In captivity, their toes and beaks are often clipped off. They live in cramped, disease-ridden conditions.

Unfortunately, most people are in the dark when it comes to food production. A recent poll showed few people knew about how poultry like chickens and turkey were treated. 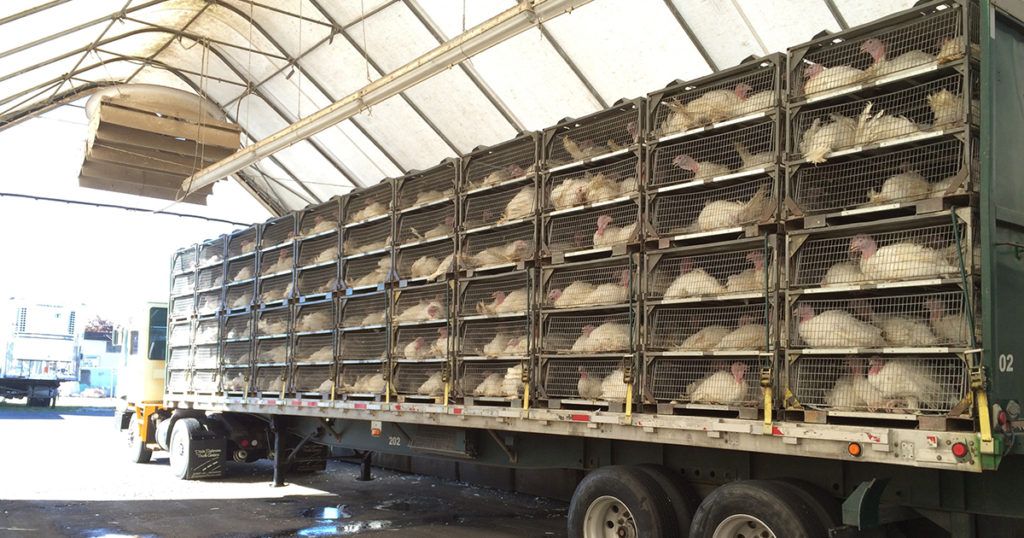 Turkeys at Lilydale courtesy of Mercy for Animals.

This is a problem that won’t get solved overnight, but MFA is asking for people to help make a change by signing their petition at LilydaleTurkeyTorture.ca.

According to Wolf, signing the petition will put pressure on Lilydale to “end live shackle slaughter in favor of less cruel systems that eliminate the horrific suffering caused by shackling, shocking, and cutting open conscious animals.”

Thanksgiving is about giving thanks for all of the good things in life. It’s ironic that in the process of celebrating, so many turkeys are robbed of their own lives.

“The best way for individual consumers to help turkeys and other animals is to simply stop eating them,” said Wolf.

Eating turkey may be a tradition for many, but given the cruel treatment of factory farmed animals, the practice of eating turkey seems outdated and inhumane. Instead of having turkey this November, try a new vegan recipe, or opt for a plant-based meat.