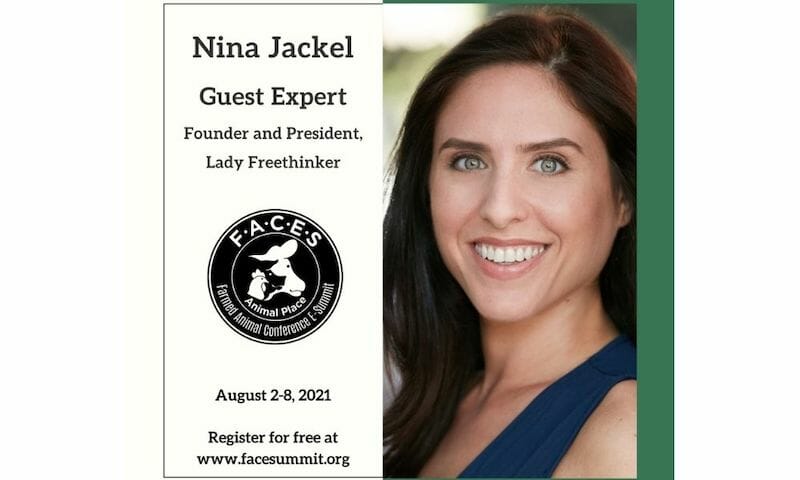 “These experts and leaders are addressing some of the most urgent issues of our time, from the devastating death toll of aquatic animals to building a bigger, more inclusive movement,” said Animal Place Program Director Kelcie Leach in a press release.

The pioneers of change — including filmmakers, scientists, journalists, activists and authors — will speak about how to expand the animal rights movement, increase visibility for animal rights issues, and support one another, according to the event’s website.

Nina will discuss how activists can use the internet and social media to advocate for animals in a segment titled Getting the Message Out with Online Activism.

“Thank you to FACES organizers for creating this impactful event,” said LFT Founder Nina Jackel. “I’m honored to be granted this opportunity to speak, and encourage everyone to keep getting the word out about farmed animals’ suffering.”

Registered attendees will also be invited to watch the Aug. 1 premiere of GUNDA, a documentary by filmmaker Viktor Kossakovsky and Executive Producer Joaquin Phoenix that focuses on animal sentience by following the daily lives of a mother pig, two cows, and a chicken.

The conference, which is co-organized with the streaming channel Plant-Based Network, will take place online from Aug. 2 to Aug.8. It will feature three speakers daily and is free with pre-registration. Those who register for a nominal fee, which will support Animal Place’s rescue work, will be able to access the speakers’ videos after the event and also will receive other perks.