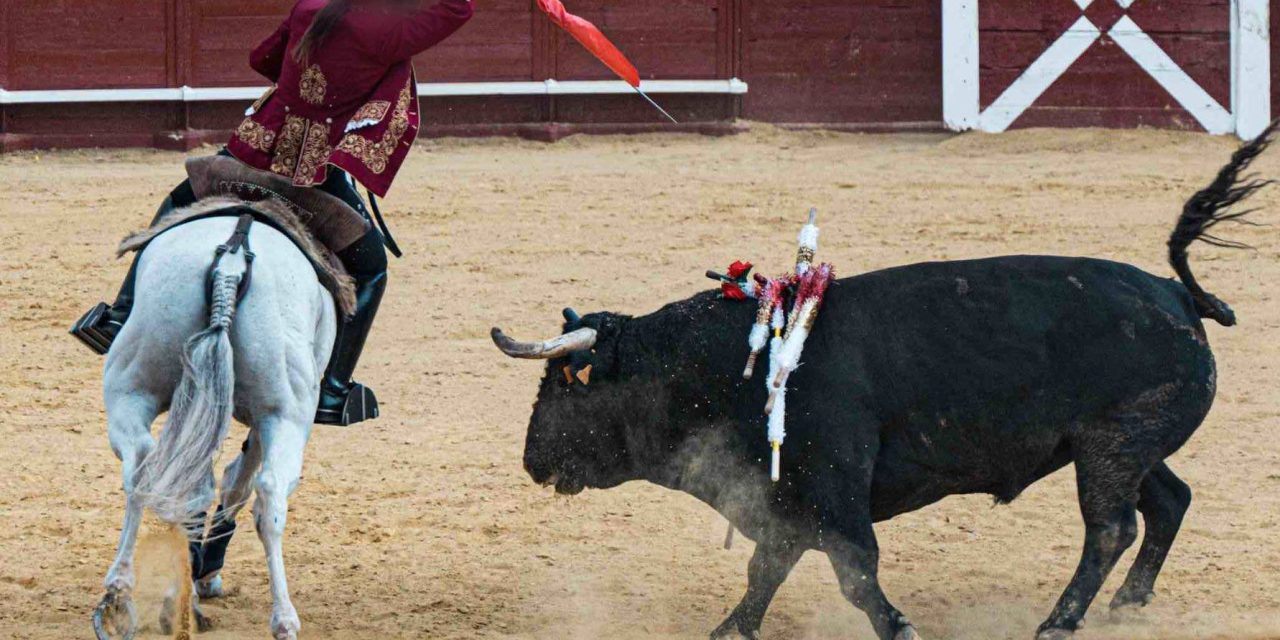 A new investigation by Lady Freethinker revealed horrifying torture to bulls stabbed to death in Spain’s Plaza de Toros de Tordesillas — all in the name of “culture” and “tradition.”

LFT’s observer documented a bull fight in the Madrid-based arena and reported riders on horseback impaling bulls with lances and spiked, harpoon-like sticks called banderillas until the animals collapsed from exhaustion and blood loss. 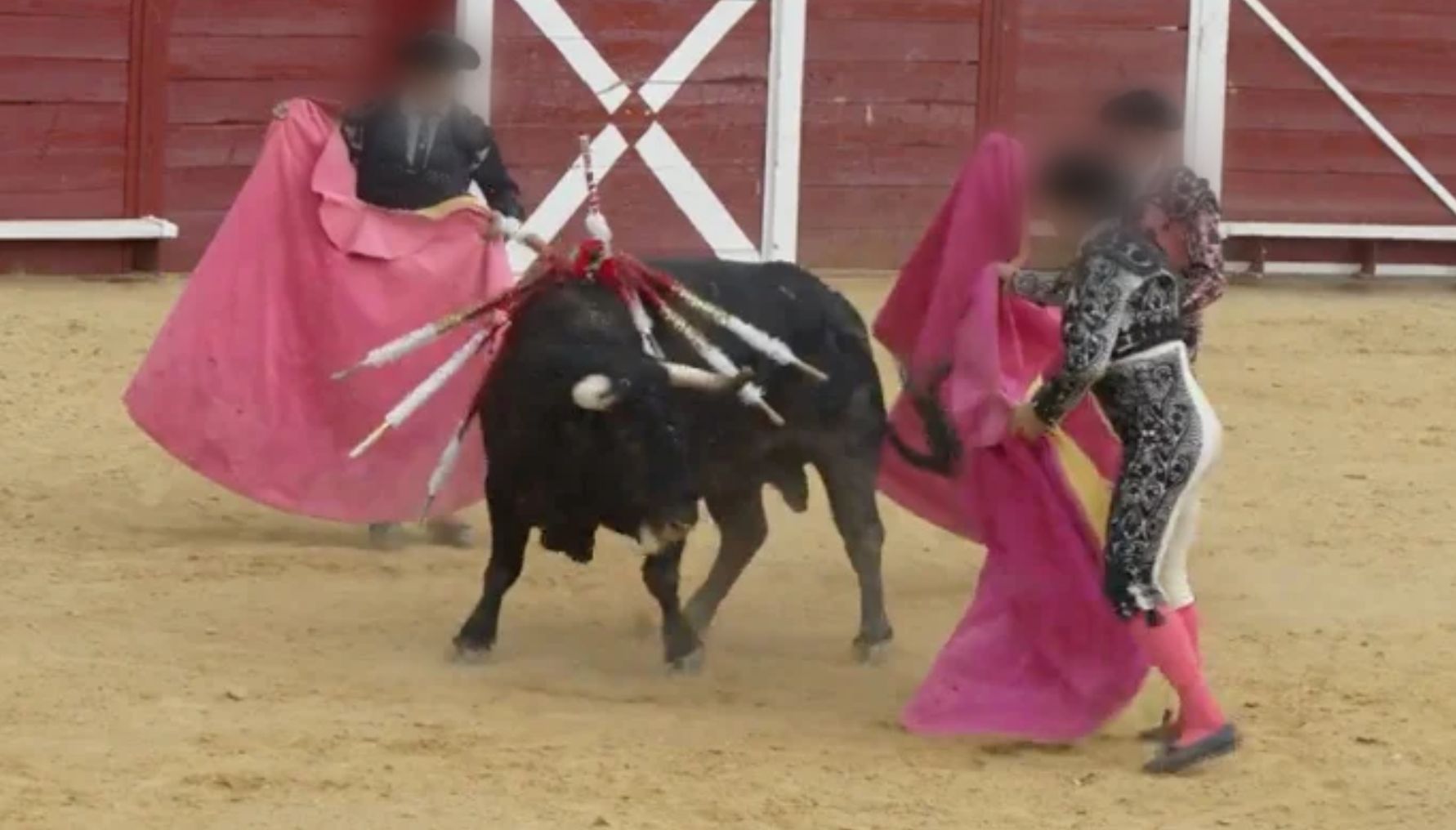 “The first thing I saw was a bull bleeding out on the side of the bullring, and all the people were screaming and clapping,” the observer said.

At least six bulls suffered and died during the single festival and were stabbed with an average of six spears before matadors – bull fighters whose name literally translates to “killers” – severed the animals’ spinal cords with final blows, the observer reported.

Horses then dragged the lifeless corpses, tied by the horns, out of the arena — leaving pools of blood in their wake. 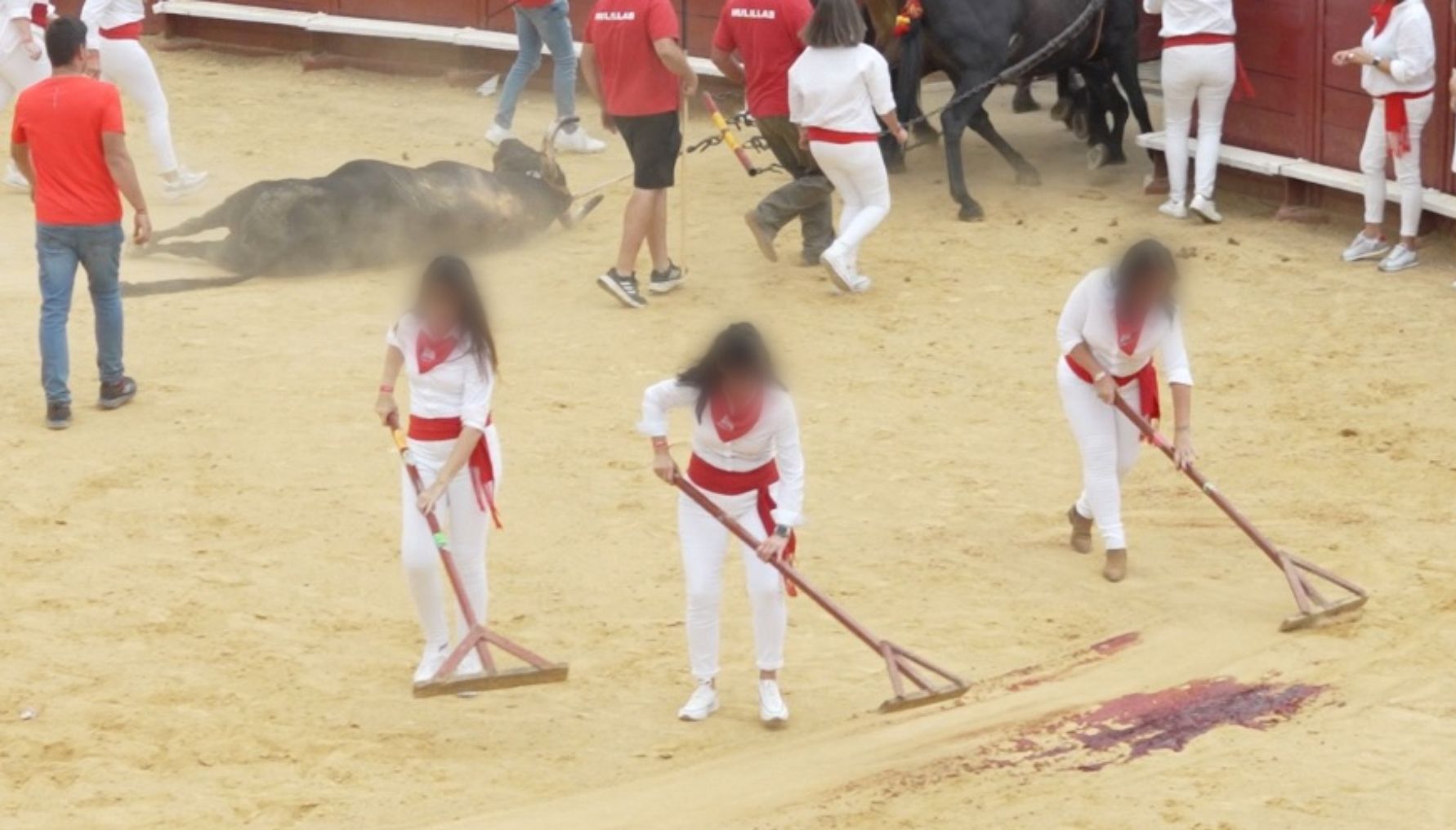 The animals were forced to fight as blood gushed from their worn-down bodies, and many bulls reportedly collapsed from blood loss after being stabbed with lances. The matadors’ assistants also used other tactics to weaken the bulls, according to the observer. 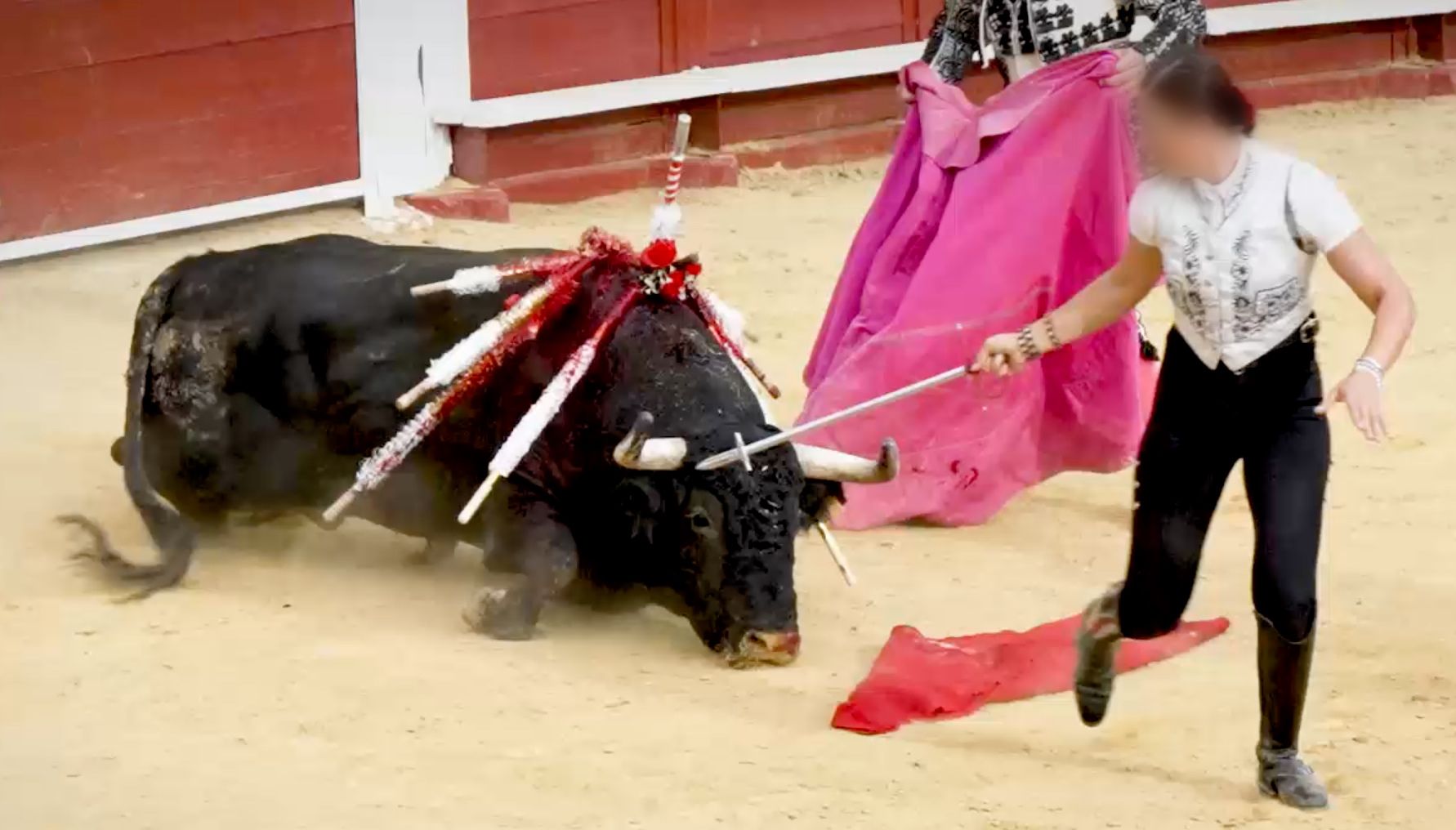 “When the bull is tired, the bull fighters’ assistants walk it and they make it dizzy until it falls and finishes,” the observer said. “After that, they are dragged by the horses.” 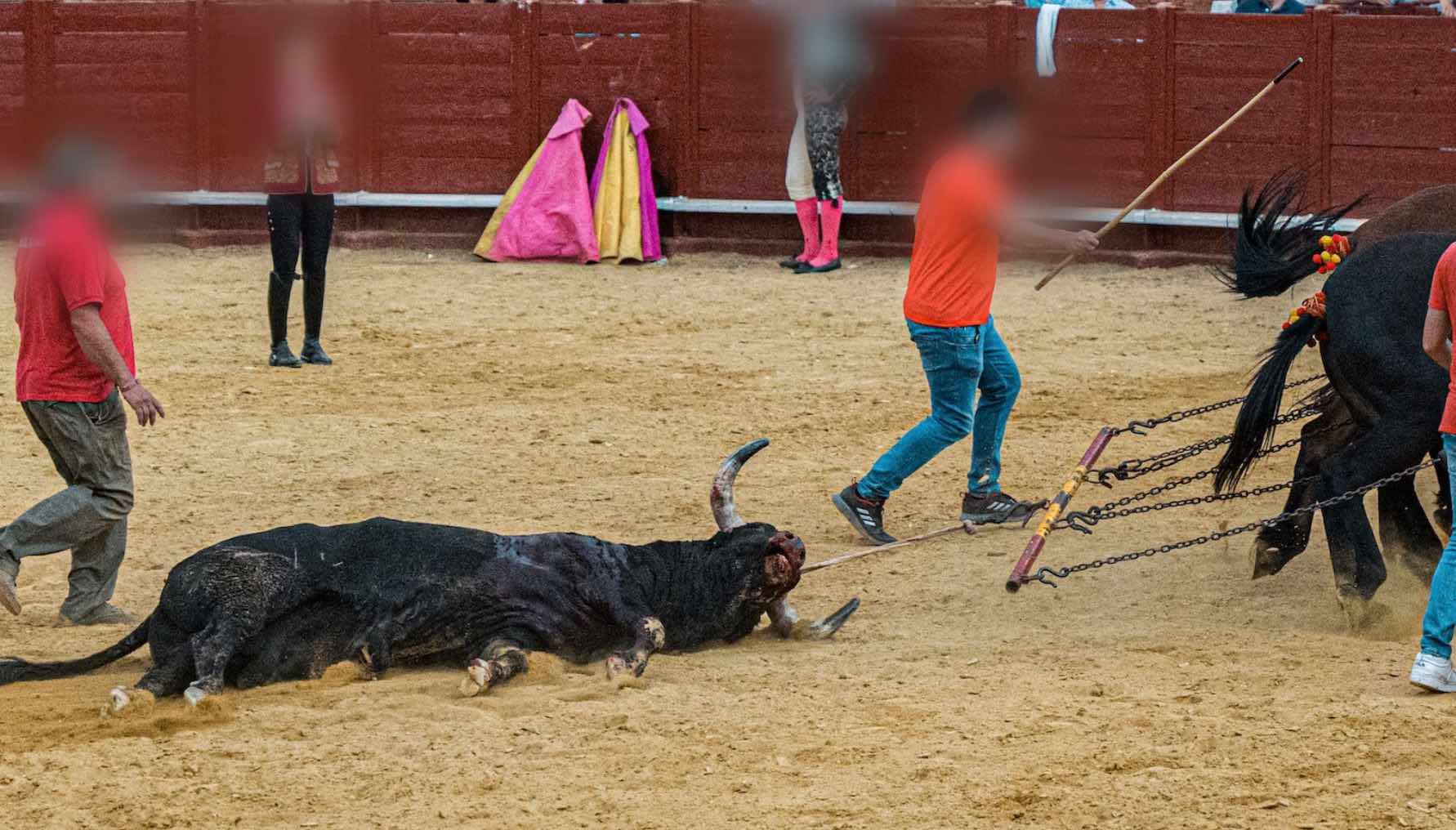 When people cheered loudly to show that they found the fight “entertaining,” parts of the bull – including the ear – were severed as an “award” for the killer, the observer said.

The brutalities lasted until 8:30 p.m. — over two hours after the observer arrived at the arena.

While our investigation revealed the undeniable brutality of bull fighting events, the scale is also staggering.

Spain held 824 bull fighting events – defined as every type of reported “festivity” in which bulls suffer and die, including fights to the death and bull runs –  in 2021, with 129 events happening in Madrid and 198 events happening in Castile-León, according to the most recent data from the Spanish Ministry of Culture and Sports.

With an average of six bulls per event, that means nearly 5,000 bulls suffered and died in Spain last year alone. The number of animal victims tormented for this ritualistic slaughter could actually be much higher, with some groups reporting as many as 7,000 annual bull deaths each year in Spain.

But the bulls are not the only ones harmed by these medieval “celebrations”; people, although they choose to be there while the bulls do not, also suffer and die.

This year, a record-tying ten people died — and hundreds more were injured — during Spain’s summer bull fighting festivals, according to the Associated Press.

Lady Freethinker formerly sent the Spanish government a petition, signed by more than 35,000 people, urging an end to brutal bull fights during the pandemic. The office of the Spanish Ambassador responded at that time by saying, “It is a symbol of our arts and culture and deeply rooted in our country.”

Tradition, however, is never a valid justification for torturing a living, sentient being – including to the death.

Bull fighting is currently only executed in a handful of countries, and there’s also documented, growing opposition among Spanish regions and citizens — calling into question how much of a deeply-entrenched “tradition” bull fighting really is if tourists are mainly the ones attending the blood-soaked events.

“I hope our decision brings further into the streets the debate and leads to the end of this tradition,” he told local news.

A survey conducted by the Spanish government in 2018-2019 found that just 8 percent of Spaniards polled attended a bull fight or bull run.

Data from the country’s Ministry of Culture and Sports also reveals that the majority of bull fighting events – or about 78 percent – are hosted by just four autonomous communities: Andalusia, Castilla-Léon, Castilla-La Mancha and Madrid.

Asturias, Balears, Canarias, Galicia, Ceuta and Melilla also hosted no bull fighting events in 2021, according to the country’s data.

The office of Spain’s president and Prime Minister, Pedro Sánchez, did not respond directly to Lady Freethinker’s inquiries about the bull fighting happening in the country but offered the following statement (translated from Spanish).

“This government is particularly respectful of animal life,” a spokesperson said. “For this reason, we have approved and submitted to Congress the Bill for the Protection, Rights, and Welfare of Animals. It is a pioneering standard that will protect and guarantee animal welfare. It’s most important objective is to end the abuse, abandonment, and sacrifice of animals.”

The referenced bill, which currently is awaiting proposed amendments by politicians, does not specifically mention bulls or bull fighting events.

However, it does extend Spain’s animal cruelty laws to “vertebrate” animals and establishes aggravated penalties for cruelty that uses “weapons, instruments, objects, means, methods, or forms that could be dangerous to the life or health of the animal,” as well as acts of cruelty conducted in public, in front of minors, or that are executed for profit — all of which clearly would apply to bull fights.

While the brutality continues, there are glimmers of hope.

Sánchez reportedly withheld tickets to corridas, or bull fights, from cultural passes he gifted to young Spaniards in 2021 in an effort to help the Spanish economy rebound from the COVID-19 pandemic, and the government also recently passed its first animal-rights related legislation, which establishes stronger penalties for animal abusers.

While these are positive steps forward, the Spanish government must do more to immediately end the severe suffering of bulls in bullfighting events and rely instead upon the other aspects of its otherwise rich and beautiful culture.

“Torturing and killing sensitive bulls for ‘entertainment’, tradition, or for any other reason is inexcusable and must end in Spain and around the world,” said Nina Jackel, Lady Freethinker President and Founder. “LFT is calling on the Spanish Prime Minister to ban bullfighting in the country immediately – something Cuba, Italy, Argentina, and many other countries have already done.”

If you haven’t already, sign our petition to Spanish officials urging an end to these gruesome blood baths — and make sure to never attend a bull fight, a bull run, or any other event that causes animals suffering for people’s “entertainment.”