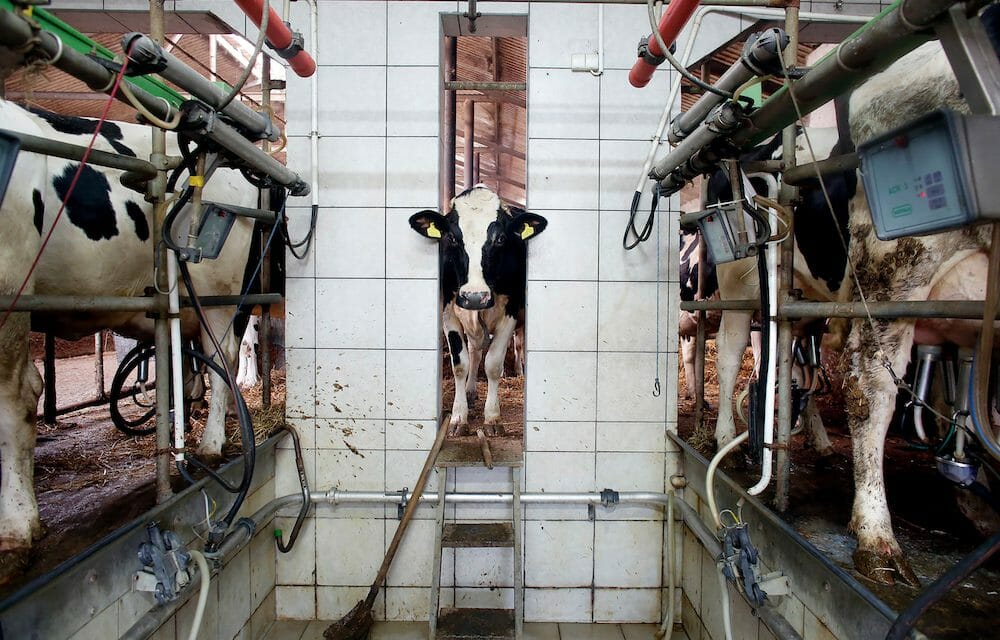 HIDDEN: Animals in the Anthropocene, a new book featuring a collection of photographs from animal rights activists, is now for sale. And Joaquin Phoenix hopes it will “ignite a fire within each of us” and “fuel [the animal rights movement] with renewed purpose.”

With over 300 pages of heartbreaking images from more than 40 international photojournalists, HIDDEN exposes animal abuse that goes on unseen every day.

“We’d like this book to start broad, high-profile conversations about our relationships with animals,” co-editor Jo-Anne McArthur told Lady Freethinker. “While we, of course, want to sell books, the target audience is principally the media and journalists, who will write and disseminate this project.”

“The audience is also the photography world,” she continued. “To them, we say: this subject matter is important. Wildlife and conservation photography, pet portraits, and general animal photography only go so far. They only cover a certain type of animal: those we love, or those who have ecological significance, or whom we’ve simply designated as important. There are a lot of other animals and a lot of other stories. They’re important too — in and of themselves, but also as they overlap with human health and the destruction of the environment.”

Paul McCartney famously said, “If slaughterhouses had glass walls, everyone would be vegetarian.” This book helps replace concrete walls with glass. But was McCartney right? Or would people prefer to live in blissful ignorance?

“I think the answer is yes to both possibilities,” co-editor Keith Wilson told Lady Freethinker. “People willingly turn a blind eye to cruelty when confronted with the facts, while others are genuinely ignorant of the extent of the cruelty around them. Sadly, it is the former who are gaining in number because with so much information and imagery available, and the means to access it at our fingertips, it’s becoming harder to claim, ‘I didn’t know that.'”

“There is less excuse for pleading ignorance about the level of animal cruelty in modern society,” he continued, “and their industrial-scale slaughter for our food. When [George] Orwell wrote his famous mantra, ‘Ignorance is Strength,’ from the book 1984, he did so to illustrate how a totalitarian state manipulates public perception and distorts the truth through the control of information. Well, in 2020, such manipulation is no longer the preserve of dictatorships; it is alive and well in democracies!”

“And yet,” Wilson said, “it isn’t governments that are at the forefront of spinning the message about how animals are raised and slaughtered for consumers’ dinner plates; it’s the agricultural industries and supermarkets and advertising agencies who continue to nurture this image of happy farm animals gamboling on a green field of buttercups and daisies in the sunshine. People are complicit in this myth because that is what they want to believe! They know in their hearts that is not the case, yet they choose to look away.”

If an image truly is worth a thousand words, HIDDEN is giving a voice to the voiceless — to the millions of animals neglected, abused, tortured, and killed every year in our own backyards. This book is a massive and necessary undertaking, forcing the world to finally confront reality. Animal abuse is happening. What will we do about it?

HIDDEN is available for purchase through Indiegogo and Amazon.

Our society conditions us to believe that humans are superior to other species, and that some animals are meant to be eaten while others should share our homes. Wealthy industries churn out dazzling advertising campaigns and propaganda to lure children, parents, and other consumers into believing falsehoods that make us ill, exploit entire communities and wreak havoc on our planet. We are entrenched in the ideology that animals are here for us to use. We capture them, cage them, wear their skin, eat their flesh, and poison their bodies in the name of science.

There will never be a scenario in which the infliction of fear and pain on a vulnerable individual benefits humankind.

As animal rights activists, our battle is against the powerful enterprises that have normalized the torment and killing of billions of animals for food, clothing, entertainment, and experimentation each year. Like conflict photographers documenting war and other humanitarian crises, the brave photojournalists featured in this book deserve our acclaim. Their work has made it impossible for exploitative industries to plausibly deny the agony and suffering taking place behind closed doors, deliberately kept out of the public consciousness.

May the images in HIDDEN ignite a fire within each of us. May they serve as a reminder of our susceptibility to greed and egocentrism. May they be an admission of our mistakes and fuel our movement with renewed purpose. Until every cage is empty, until all are free, I am yours in action and solidarity.