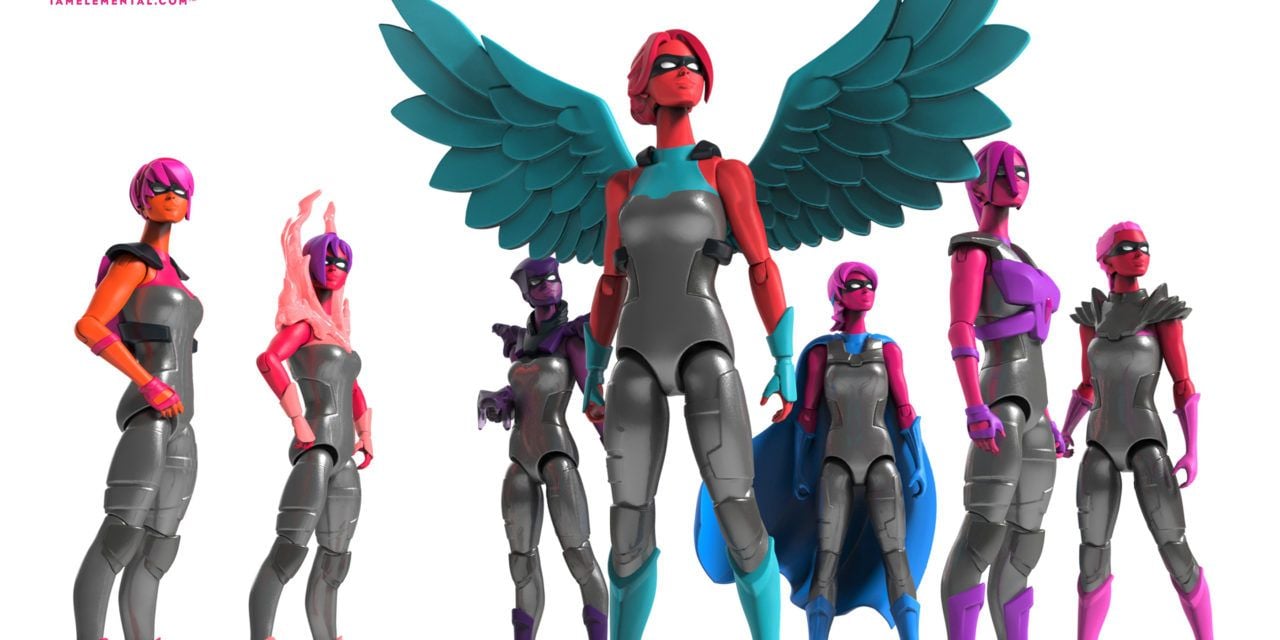 And now, IAmElemental is seeing its market expand even further: the Jim Henson Company has just announced it will develop a children’s animated television series based upon the action figures. The show will target kids ages 6-12, and IAmElemental’s message of empowerment will ring loud and clear.

“We think that kids are far more capable of understanding the idea of power and character than most grown-ups realize. We did not dumb down the concepts – these figures aren’t Betty Brave and Patty Persistence, for example,” IAmElemental’s Chief Elemental Officer Julie Kerwin told Lady Freethinker. “Just like the Periodic Table of Elements are the building blocks of all matter, in the IAmElemental universe, the Elements of Power are the building blocks of character. By breaking Courage down into Bravery, Energy, Honesty, Industry, Enthusiasm, Persistence, and Fear, for example, we’ve made them easily accessible to kids. In our experience, when presented in this format, children quickly come to understand that they can use these powers to create good in the world. That is the larger IAmElemental message.”

While the action figures represent real-life superpowers available to kids, they do have magical powers as well, which keeps kids’ imaginations at work.

“We hope that these superpowers, and the fierce female figures themselves, will spark hours of play and allow girls to place themselves at the center of an active storyline where they can save the world,” said Kerwin.

IAmElemental works to bring more gender equality into the action world, as well as a healthy, realistic portrayal of women.

“Children don’t live in a bubble,” said Kerwin. “Thanks to (for example) the heavy overuse of photoshop, which ‘erases’ real women and replaces them with doll-like imitations, the constant denigration of women on low-cost reality television programs, and even the ‘tarting-up’ of iconic figures like Strawberry Shortcake and Holly Hobbie, girls (and boys) are internalizing messages about what it means to be a ‘perfect’ woman that are completely unattainable because they aren’t real.”

Kerwin believes that both boys and girls should be educated and exposed to this subject.

“We are committed to making sure that our show highlights strong women in a way that appeals to girls and boys in equal measure. If we hope to achieve gender equality in our lifetime, we can’t only educate one half of the population,” she said.

The television show will help bring this message to a broader audience, giving children all around the globe the courage, wisdom, and strength they need to change the world.

“We are thrilled and grateful for the opportunity to work with the Superhero team at The Jim Henson Company,” said Kerwin. “Their superpowers of creativity and originality have inspired me both as a child and as an adult, and I couldn’t wish for a better partner to bring the IAmElemental messages of character strength and empowerment to a wider audience.”