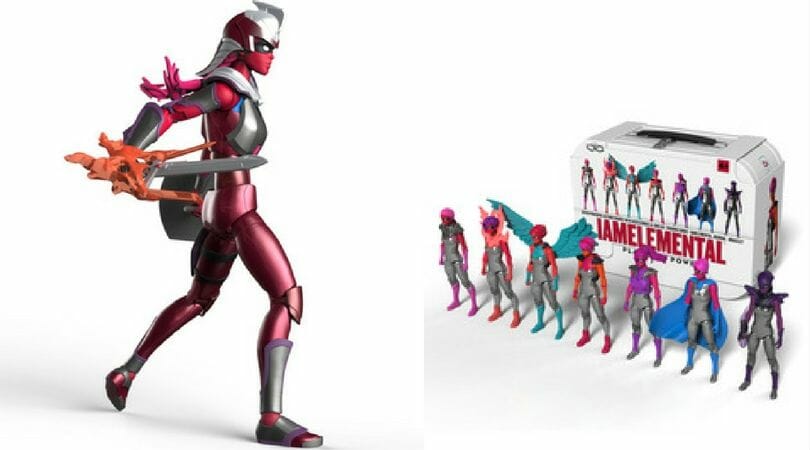 In the spirit of September marking Childhood Cancer Awareness Month, startup action-figure maker IAmElemental is deploying its female superheroes to console and encourage child cancer sufferers. These “Courage Core Power” figures are inspired by Joan of Arc and embody the elements of energy, bravery, enthusiasm, honesty, fear, persistence, and industry. The figures sport removable armor, helmets, a “Courage shield” and an “Energy sword of fire.”

The company developed the “Buy One, Donate One” program in honor of 14-year-old Anna Bosma, who was terminally ill and eagerly awaiting the Series 2/Wisdom action figure release. Her grandmother told IAmElemental that Anna probably wouldn’t be alive when the products debuted, so they sent her a set before launch.

Anna passed away after a four-year battle with cancer; but her parents, Buck and Heidi Bosma, helped keep her memory alive by working with IAmElemental to distribute Courage Core Power figures in Anna’s honor. Anna had wished for other ill children to have the action figures she enjoyed so much herself.

“As a startup, I have the luxury of being able to respond directly to every email,” IAMElemental Chief Elemental Officer Julie Kerwin told Lady Freethinker. “As a result, we have created a community that goes far beyond the typical customer relationship. And for that, we are extremely grateful.”

With the buy one, donate one special, the company is giving away a Courage Core Power female action figure to a child with cancer each time one is purchased from their online store.

“One of the lovely results of IAmElemental’s Buy One, Donate One (BODO) program is that some customers buying the figures have purchased them specifically for young children fighting cancer,” said Kerwin. “As a result, the superpowers are already finding their way into the hands of pediatric cancer patients.”

“We have also heard from cancer survivors who are requesting that their donated figure go to a patient at the hospital where they, themselves, were treated.” Kerwin added.

In the United States, more than 10,000 children under the age of 15 will be diagnosed with some form of cancer in 2016, according to the American Cancer Society. While survival rates have improved dramatically, cancer is still the second-leading cause of death for children ages 1 to 14 years (accidents are the number-one cause of death in this age group).