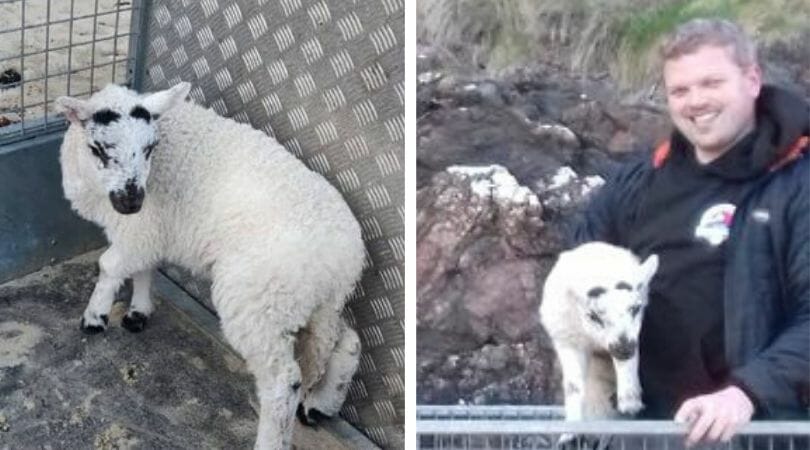 A lamb stuck for several days on the edge of a dangerous cliff is now safe thanks to a team of rescuers.

On April 28, a concerned local resident alerted authorities to the situation after noticing that the lamb had been in the same place among the North Tolsta Cliffs in the Isle of Lewis for an unusually long time. The Scottish SPCA team reported to the scene, where they discovered the young sheep trapped and unable to climb to safety due to injuries to her front legs. Her uninjured mother refused to leave her baby’s side.

“Although the mother sheep could get back up the cliffs unaided, she didn’t want to leave her baby,” Scottish SPCA inspector Maggie Adkins said. “I knew I wouldn’t be able to reach the youngster, as it was on an inaccessible part of the cliffs, so I called Hebrides Mountain Rescue Team who were able to help with the rescue.”

The lamb was easy to catch because of her injuries.

“Once the rescue was underway, we managed to catch the lamb fairly quickly,” said Charlie Greenwood, a team leader at Hebrides Mountain Rescue Team, “enabling us to return before the rising tide cut off access to the cliffs.”

Adkins credited the team for assisting the rescue, which would not have been possible without their specialized equipment and ability to navigate the difficult landscape.

“The team are fairly used to carrying out animal rescues, especially at this time of year,” Greenwood explained. “This incident was slightly different due to COVID-19, where minimal personnel were involved and while attempting to maintain good social distancing.”

The lamb is alive and well thanks to the worried onlooker who reported the situation and the rescuers who swiftly responded.