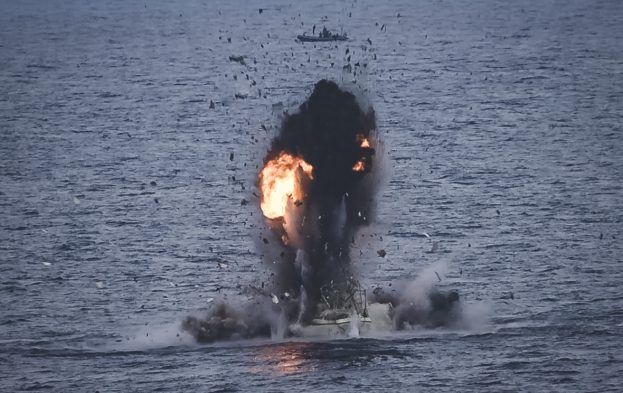 An illegal whaling ship was apprehended and neutralized off the coast of Somalia this week by military personnel from the European Union Naval Force (EU NAVFOR).

The discovery of the pirate whaling ship followed a reported pirate attack on another vessel in the area earlier this month. After deploying anti-pirate forces — including aircraft and ships — to further investigate, officials confirmed that the whalers were active, not only slaughtering these marine giants illegally but posing a direct threat to legitimate vessels in the area.

The crew of ESPS Castilla tracked this illegal vessel to a small bay, where they seized it, removed the crew, and towed it out to sea to be destroyed.

“Using the resources of Op Atalanta we were able to identify, track and destroy the equipment of a Pirate Action Group making it harder for them to attack maritime shipping in the future,” said Admiral Nanclares of EU NAVFOR. “We will continue to deter and prevent acts of piracy with every chance we get in order to ensure vulnerable shipping and their crews remain safe while they transit the Western Indian Ocean”.

Operation Atalanta is a European counter-piracy military initiative aimed at fighting the massive problem of piracy around the coast of Somalia and the Gulf of Aden. In addition to this, they monitor illegal fishing activity in the area.

The Gulf of Aden was once teeming with marine life, home to a wide variety of whales and dolphins. Now, only a handful remain, thanks to decades of overhunting by countries like Japan and the Soviet Union.

Commercial whaling was banned by the International Whaling Commission in 1986, but Iceland and Norway continue the process in objection to the mandate, while Japan exploits the loophole of “scientific whaling,” slaughtering hundreds of whales every year under the guise of research.

While both commercial and illegal whale hunting are barbaric, at least there’s one fewer ship roaming the oceans, thanks to Operation Atalanta.