Greyhounds Thrown Down Wells to Die by Cruel Hunters 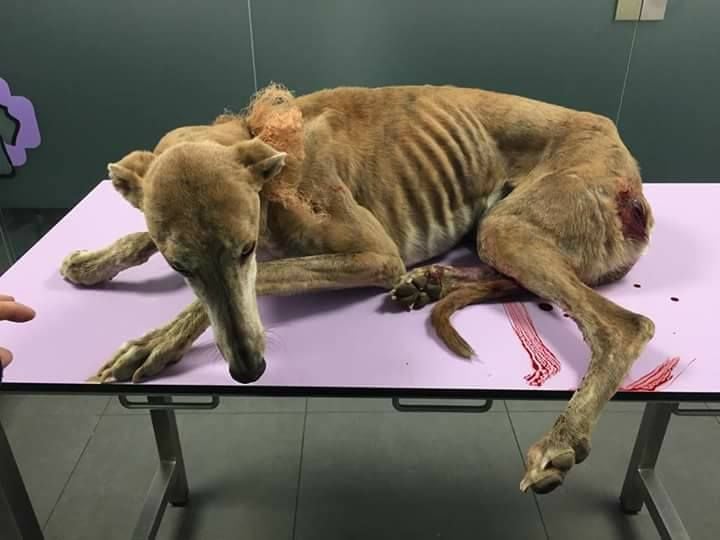 Every year, an estimated 50,000 hunting greyhounds — known as galgos — die horrific and painful deaths at the hands of their “guardians” in Spain.

How the greyhounds are brutally murdered varies. Many are thrown into abandoned wells to starve to death; others are burned alive, hanged, bludgeoned, or have their throats slit. The “lucky” ones are simply left to die or quickly killed.

Galgos are distantly related to British greyhounds. They have excellent eyesight and are used in hunting competitions. Once considered a valuable dog bred only by Spanish nobles, galgos are now considered disposable — used, abused, and abandoned by the hunters, or galgueros.

Hare coursing or lure coursing competitions take place annually from October to February throughout Spain. Dogs race and compete to catch a live hare or mechanically-operated substitute either in the countryside or on an enclosed track.

The training is as brutal as their eventual slaughter. These majestic dogs are often chained outside in horrible conditions and fed only enough to keep them alive. The galgueros keep them on the edge of starvation to ensure they are motivated to run fast enough during the hunting competitions.

To train the dogs to go faster, the hunters tie them to the back of a motorbike or car and force them to run at breakneck speeds. Those that fall or get injured are tossed aside.

Because of the seven month break between hunting seasons, dogs are usually killed after one or two seasons. It’s cheaper to buy a new dog every year than feed and care for the dogs during the break.

If a dog performs well, they may receive a humane death by euthanasia, or a quick hanging. However, dogs that were unsuccessful are considered to have brought shame upon the galuero and must be punished.

One of the most popular punishments is to hang a dog by the neck so its toes only just touch the ground. Known as the “piano dance” the dog taps its feet on the ground as it struggles to stand, and eventually strangles to death.

Several organizations, such as SOS Galgos are working to raise awareness for this heartbreaking issue. They also work to educate the galgueros and rescue and rehome the dogs. But this is not enough. Spanish government needs to step up and outlaw this archaic “sport” immediately.

Add your voice to our petition calling for an end to the needless slaughter of thousands of innocent dogs.