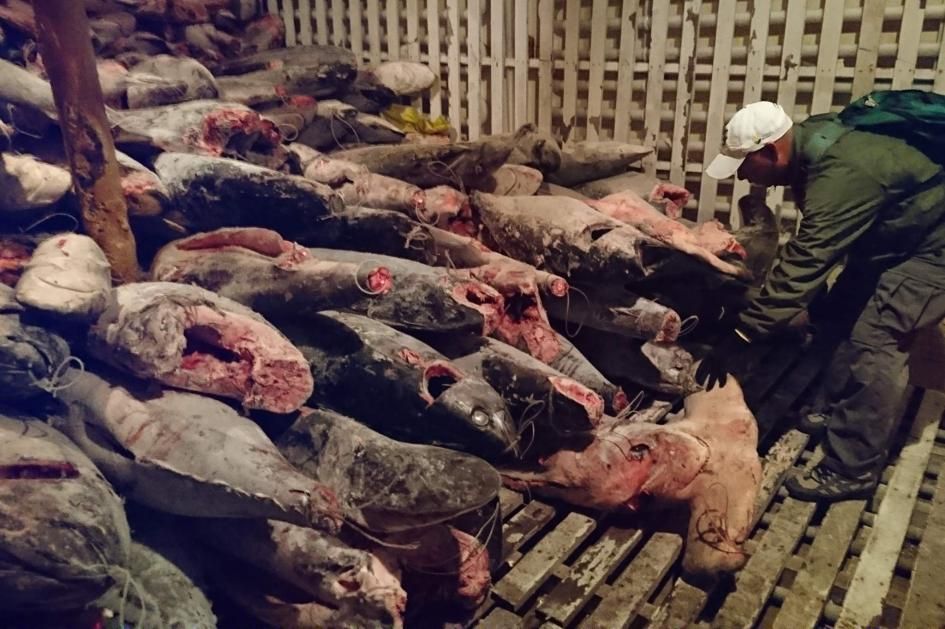 On Sunday, August 14, Ecuadorian police officers detained the Fu Yuan Yu Leng 999, a Chinese fishing boat, to find an estimated 300 tons of captured baby and young sharks on board.  The boat was spotted in a marine reserve in the Galapagos Islands, and authorities are still determining how much of the colossal catch, which included protected shark species like hammerheads, came from the protected reserve.

Marine ecologist Pelayo Salinas told National Geographic that this incident undoubtedly marks “the biggest seizure of sharks in the history of the Galapagos.”

All visitors to the Galapagos Islands’ marine reserve, with the exception of specific reserve employees, are strictly prohibited from capturing fish from its waters, and the 20 crew members of the Fu Yuan Yu Leng 999 will face up to three years in prison if they are convicted of trafficking protected species.

The Galapagos Islands has a long history of incredibly rich biodiversity, with over 20% of its marine species alone residing solely in the archipelago, but China has its own long history of capturing and consuming sharks. Fishermen capture sharks specifically for their fins, which individuals then use to make a traditional soup the Chinese have been consuming regularly since as early as 960 A.D.

Shark fin soup is widely considered a delicacy or luxury dish, and is thought to symbolize hospitality, status, and good fortune. Some sharks, like those found on the Fu Yuan Yu Leng 999, are captured whole, while others are released back into the ocean to die after their fins are sliced off. The latter practice, known as shark finning, is illegal in several countries, but the black market for fins remains expansive.  A single bowl of shark fin soup can sell for up to $200, a figure that unfortunately encourages fisherman to continue thinning the dying shark population for profit.

Comprehensive studies have shown that, in recent years, an estimated 100 million sharks are killed annually worldwide. Humans from thousands of countries have documented themselves capturing and torturing sharks without being legally prosecuted. To learn more about the rapidly decreasing shark population, and how you can help, visit SharkSavers.org.