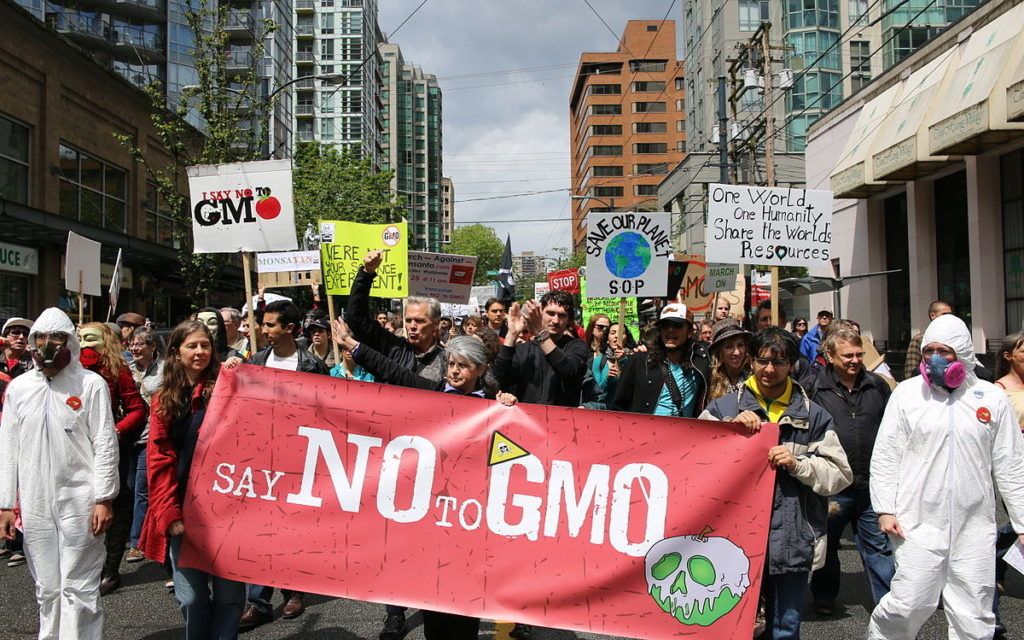 Protest in Vancouver against Monsanto, GMOs. Picture via Wikimedia Commons.

The resignation has two objectives, Dr. Bronner Cosmic Engagement Officer (CEO) David Bronner told Lady Freethinker. The first is “to send a message that OTA’s betrayal of the consumer-driven transparency movement was unacceptable.”

Bronner also cited a desire to “redirect our resources to true organic allies working for lasting transformation of our food and agricultural system.”

Leaving an organization that represents over 6,500 organic businesses is not an easy decision. The OTA provides many benefits, resources, and opportunities to grow and network to its members.

“The organic movement loses when groups like OTA betray their allies and the core principles of the movement,” Bronner said, focusing on the bigger picture. “We’ve lost an ally, but we also are reaffirming our commitments to organic agriculture and strengthening relationships with partners like the Rodale Institute and IFOAM.”

The legislation in question — H.R. 1559 – The Safe and Accurate Food Labeling Act — was passed July 8th, 2016 by a coalition of 63 senators who effectively shot down years of grassroots and consumer-led movements to create a clear, standard label for GMO products.

“Safe and Accurate” couldn’t be more misleading. Rather than require clear, national labeling standards for GMOs, H.R. 1559 only requires certain types of GMO products to provide a phone number or code that can be scanned by a cell phone. This ultimately hides GMOs from consumers and overturns Vermont’s and other states’ efforts to label products clearly.

Because of this and other factors, many refer to the bill as the DARK Act (Denying Americans the Right to Know).

Passing the DARK Act required a minimum of 60 votes. Several members of the Organic Trade Association (OTA) played a key role in the ultimate outcome of 63 votes against 30, betraying many of their members concerned about the presence of pesticides and GMOs in food — including Dr. Bronner’s.

“The organic movement loses when groups like OTA betray their allies and the core principles of the movement.” – David Bronner, Dr. Bronner Cosmic Engagement Officer (CEO)

Efforts to pass the DARK Act are rife with intrigue and complex political dealings. To better understand how the bill passed and the controversy behind it, let’s break it down.

Criticism of the DARK Act 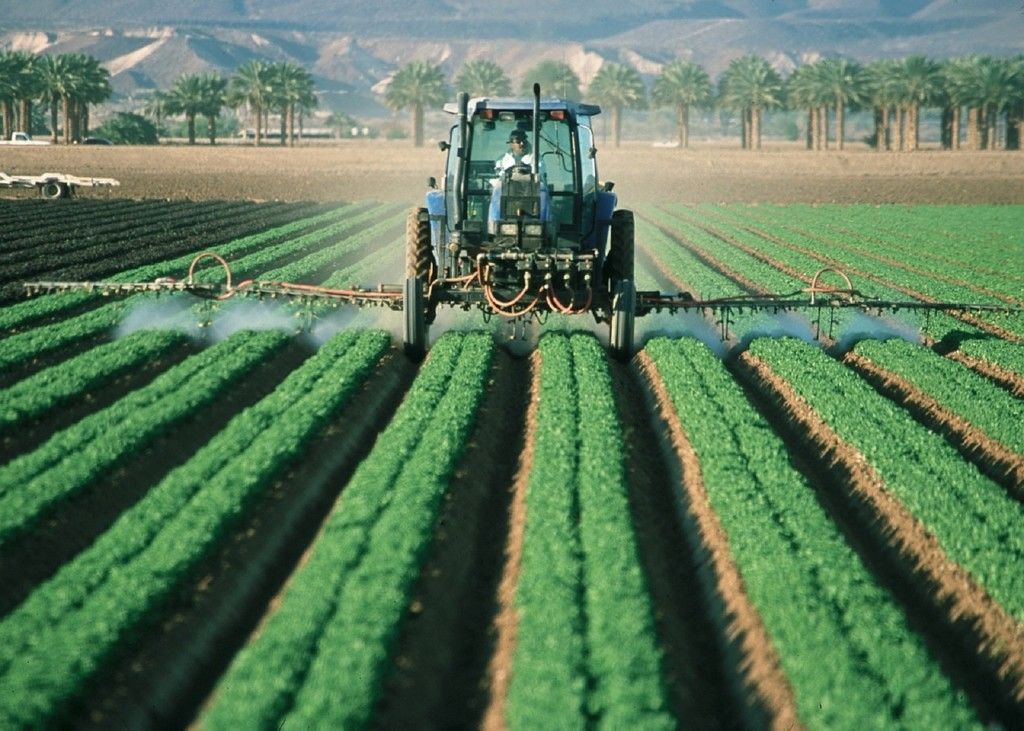 GMO crops are resistant to many pesticides, allowing farmers to use them in abundance. Picture by skeeze via Pixabay,

First, it may be helpful to understand why many people are so unhappy about the DARK Act itself, and how it got its dubious name. Here’s what opponents of H.R. 1559 argue:

In a scathing article published on Huffington Post, Bronner, wrote that “the legislation is a gift to the pesticide and food industries who make and sell GMOs.”

Considering the glaring flaws, it’s hard to see how this bill could have been passed for the good of consumers.

The DARK Controversy of Labeling, GMOs, and the OTA 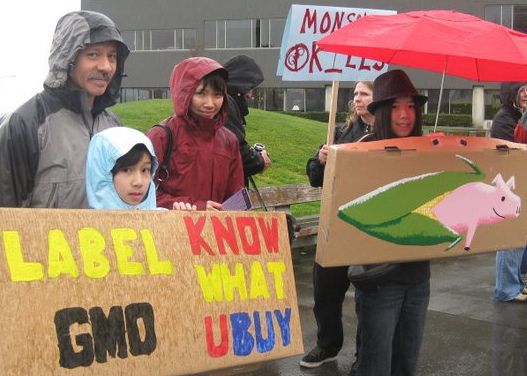 Seattle’s Say no to Monsanto’s GMOs Rally!
Picture by Alexis Baden-Mayer via Flickr, CC by 2.0.

According to EcoWatch, many surveys have shown that the majority of Americans (as many as 90 percent) actually want GMO labeling. So how could such a confusing and contradictory bill pass in the first place?

As with much in Washington, a lot of political intrigue and negotiating carried the bill through the senate, with the OTA playing a key role.

Many organic producers and groups support GMO labeling. Even the OTA originally opposed the DARK Act. In fact, a very similar bill (the Biotech Labeling Solutions Act) failed to pass the senate in March of 2016, just a few months before the DARK Act passed.

However, OTA leadership, along with Just Label It, gave in to pressure from the biotech industry. Three influential members of the OTA – Laura Batcha (Executive Director), Missy Hughes (board chair), and George Siemon (Organic Valley’s chief executive and former OTA chairman) – decided to take matters into their own hands and support the bill.

“This was an ethical as much as strategic failure of the leadership.” – David Bronner

Without consulting their base, OTA leadership began to lobby for the DARK Act, effectively securing its passage. They even hired the same lobbying firm representing Biotechnology Innovation Organization, a Monsanto supporter.

“Decisions of this magnitude should not be made without consulting key members and movement leaders,” said Bronner. “This was an ethical as much as strategic failure of the leadership.”

The OTA defended their decision, calling it a “compromise” in an online statement. They also told members that although “the bill has its flaws,” they were going to “engage with USDA to limit the technology application.”

Bronner, however, believes the OTA has lost touch with the organic movement and compromised many of its original principles when they pushed for the bill.

“OTA unfortunately sees preserving access to elected and appointed officials in government as worth trading away important principles like consumer transparency,” Bronner said.

It does seem like the OTA made a deal with the biotech industry – according to Alternet, the original bill did not grant organic foods the right to use the “non-GMO” label freely and without testing. Rather, it was added at the last minute, and directly benefits the OTA and many large organic producers.

The OTA’s message is telling as well:

“[The bill]  not only requires disclosure of GMO ingredients, but also includes important provisions that are excellent for organic farmers and food makers – and for the millions of consumers who choose organic every day — because they recognize, unequivocally, that USDA Certified Organic products qualify for non-GMO claims in the market place. Those provisions safeguard USDA certified organic as the gold standard for transparency and non-GMO status”

Far from holding organic producers accountable to really ensure products are free of GMOs, it ensures that they won’t have to undergo testing.

The OTA Compromised its Integrity Even Before the DARK Act

This isn’t the first time the OTA has made questionable decisions. Its members are diverse, ranging from small businesses to large ones, who don’t always have the same interests or integrity.

In 2006, the OTA was criticized for the rider attached to the Agricultural Appropriations Act, which essentially allowed products that were not completely organic to use the label anyway.

The fact that the lobby group the OTA hired, Podesta Group, has strong ties to Monsanto supporters doesn’t help the OTA’s case, either. They’ve also supported Monsanto in other ways, helping to fund journalist training that included trips to Monsanto’s research facility.

It seems like supporting the DARK Act was the final straw for Dr. Bronner’s as well as other groups like the Organic Seed Growers and Trade Association, which have since resigned from the OTA.

Going forward, there are still ways to make sure labeling is clearer than the muddled, technology-driven provisions of the DARK Act. Dr. Bronner’s and other organizations, including the OTA, plan on pressuring the USDA, which will interpret and implement the new legislation.