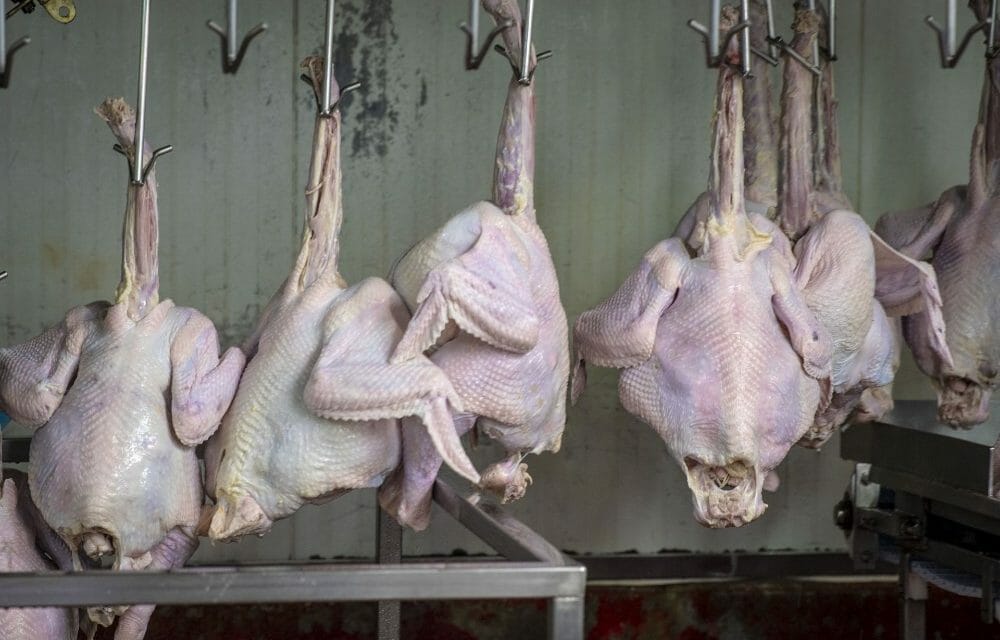 A new proposal from the U.S. Department of Agriculture (USDA) allowing poultry plants to increase their line processing speeds by 25 percent will put animals, workers, and consumers in increased danger.

Plants are allowed to process up to 140 birds per minute under existing regulations — a rate that is already “insanely fast,” according to the United Food and Commercial Workers International Union (UFCW).

The organization notes that the current rate allows one employee to slaughter 35 to 45 birds in a single minute, up to 2,000 each hour, or about 14,000 each day.

But now the USDA wants to allow poultry plants to increase their line speeds to 175 birds per minute — a proposal denounced by both animal rights groups and worker safety agencies.

The National Employment Law Project (NELP) called the proposal “irresponsible and reckless,” noting that the change would increase the risk of severe injury, illness, and death to poultry workers.

The National Council for Occupational Safety and Health (COSH) said the proposed change would be especially “bad public policy” during the COVID-19 pandemic, given that the speeds won’t allow workers to socially distance in the poultry plants, several of which have been cited for coronavirus outbreaks.

“This last-minute push for an ill-advised rule change could be deadly for essential workers in slaughterhouses,” said Jessica Martinez, the national COSH’s co-executive director, in an agency statement.

Just how fast is 175 beats (or birds) per minute? Listen to the metronome counter below, but picture each beat as a chicken’s throat getting sliced.

Even the National Chicken Council — the voice of the poultry industry and a known advocate for unrestricted line speeds — notes that moving too fast is dangerous.

“Line speeds are one of several factors that must be appropriately balanced if consistent production of uniform and high-quality poultry products is to be achieved,” the Council states on its website. “If line speeds are set too fast, then tasks will not be performed properly.”

The National Chicken Council is trying to minimize people’s concerns about worker safety, saying the increased line speeds will only apply to the evisceration line, or an automated process that disembowels chickens and is overseen by only two percent of a plant’s workers.

But the dangers of increasing line speed specific to the evisceration line have been noted as far back as 2017, when they were denounced by Phyllis McKelvey, a retired USDA food inspector who now works for the Government Accountability Project.

“These machines will pull the viscera, which is the guts of the chicken,” she told NPR, “and a lot of times the guts hang on their prongs and those machines just get covered up in guts, which is slinging manure all over the product.”

The agency tasked with ensuring food safety is the USDA. But increasing line speeds would give those same inspectors less time to spot birds on the processing lines that may have diseases, abscesses, or other contamination that makes the meat unsafe for consumers, the UFCW noted.

The Occupational Safety and Health Administration (OSHA) would also need 160 years to investigate all the plants under its oversight just once, according to calculations from the National Employment Law Project.

Where the humane treatment or oversight of animals sent to slaughter is concerned, the USDA’s track record is terrible, according to documents obtained through public record requests.

In the United States, poultry workers slaughter about 9.6 billion birds each year for meat. Currently, there is no regulation requiring that the birds sent to slaughter be handled humanely.

But multiple agencies, including the USDA itself, acknowledge that the safety of animal products can be compromised when animals die for reasons other than slaughter — such as the hundreds of chickens who come to facilities dead on arrival each year from suffocating or having been exposed to extreme weather.

The Animal Welfare Institute (AWI), a Washington, D.C.-based nonprofit, and the Farm Sanctuary, a New York-based nonprofit, sued the USDA in August for failing to require humane handling of poultry at slaughter. The lawsuit is pending.

Meanwhile, inspection reports obtained by AWI through Freedom of Information (FOIA) requests showed USDA officials took action to stop the abuse of birds at poultry plants in only 14 percent of documented violations from 2017 to 2019.

The most common violations included birds drowning in scald tanks, getting buried alive under piles of other dead birds, and suffocating on live hang belts, according to AWI records.

Only two plants received “letters of concern” from the USDA for their egregious and repeat handling problems. More than a dozen others, some of which had dozens of logged violations, received “no real consequences,” according to AWI.

“It is clear that the USDA is not serious about preventing mistreatment of birds at slaughter,” said Dena Jones, AWI’s farm animal program director. “Absent real accountability, industry leaders have no incentive to alter their behavior and treat birds more humanely.”

Perhaps not surprisingly, plants with the highest numbers of records related to humane handling issues also ranked among the worst in terms of the number of reported worker injuries and safety concerns. Of the 15 plants already approved by the USDA through waivers to increase their line speeds to 175 bpm, all have records of severe injuries, violations, or COVID-19 outbreaks, according to NELP.

The proposal is now in the White House’s Office of Management and Budget (OMB), which looks at the economic impact of proposed changes. After the OMB review, the USDA will need to publish the changes in the Federal Register. A period of public comment will follow, and the USDA is supposed to take those comments into consideration before determining the final rule, which can be challenged in federal court.

Lady Freethinker applauds the actions of the National Employment Law Project, The National Council for Occupational Safety and Health, the United Food and Commercial Workers International Union, the Animal Welfare Institute, and all others raising awareness against this dangerous proposed change that unnecessarily puts animals, workers, and consumers in danger.