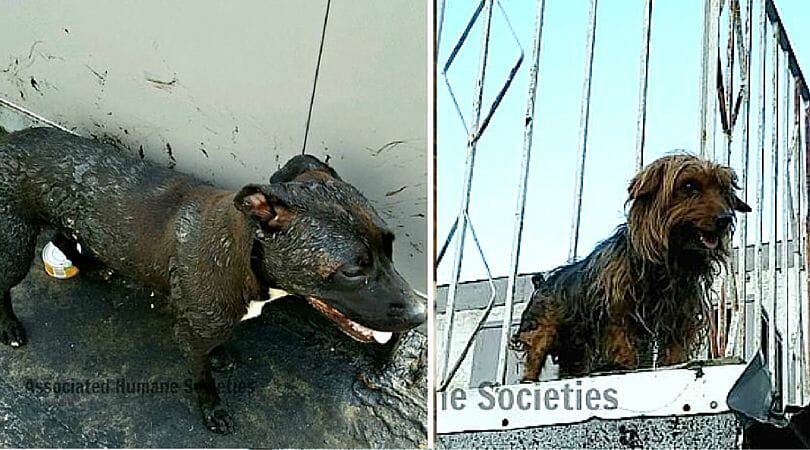 Two dogs stranded on a New Jersey rooftop in 96-degree heat have been rescued and given medical treatment. The pit bull and Yorkshire terrier were left on the rooftop with no shade; one was “dancing” in a desperate attempt stop the melted, bubbling tar from burning their paws.

“The Yorkie sat in the tar and its rear end and tail area were completely burned,” said Nicki Dawson, assistant director of the Associated Humane Societies-Newark. “The pit bull appeared to have rolled in the tar, so it was burned all over its body. Both of the dogs’ pads on their paws were also really burned.”

On the roof, the rescuers found scraps of food that were seemingly left outside to feed the animals — there was “not a drop of water in sight.” The piles of feces littering the roof indicated that the dogs had been cast on the roof to live.

Thankfully, the dogs are both recovering from their wounds, and will be ready for adoption soon. The Associated Humane Popcorn Park Shelter reported on their condition on Facebook:

No matter what the temperature, it’s wrong to simply throw your dogs outside and forget about them. But leaving them on a hot tar roof is criminal, plain and simple. The New Jersey Society for the Prevention of Cruelty to Animals (NJSPCA) has started an investigation into the crime, but so far nobody knows whom the dogs belong to. May the owners be found and fully apprehended.