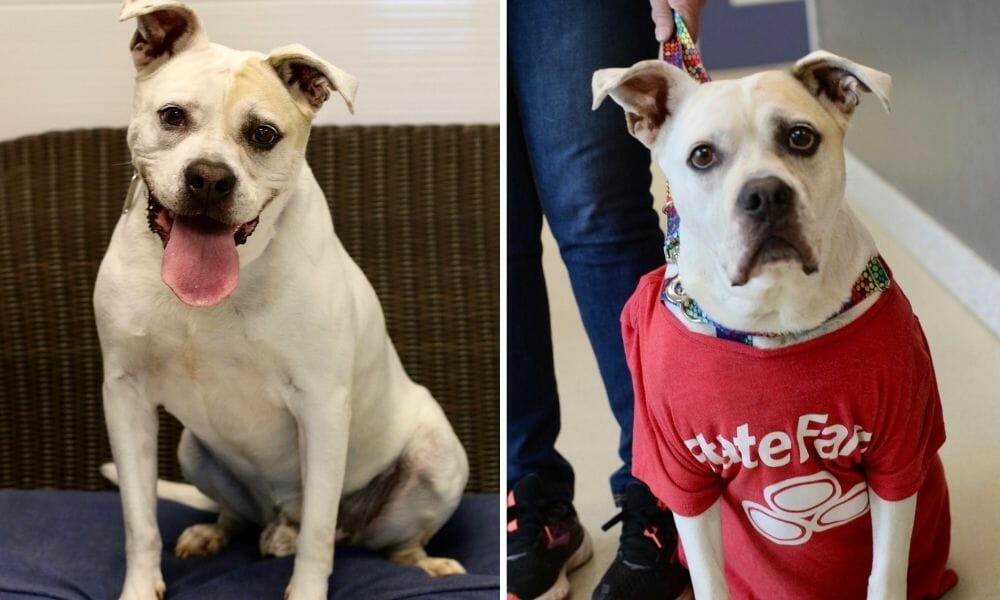 The eight-year-old canine’s trips back-and-forth between various homes and the Burlington Animal Shelter in N.C. began in January when his guardian passed away and rescuers found him locked in a crate at the home.

A family adopted the dog but soon lost their home and returned Jake to the shelter. His tendency to reappear earned him the nickname “Jake from State Farm” after the happy insurance agent that stars in State Farm commercials. Employees even began dressing him accordingly in a red t-shirt bearing the company’s logo.

Jake briefly stayed at two foster homes but did not get along with the households’ cats, landing him back at the shelter yet again. Meanwhile, several prospective pet parents scheduled meet-and-greets with Jake, but nobody adopted him.

“A lot of times, the older dogs tend to get overlooked,” said Burlington customer service supervisor Darlene Cox, according to the Charlotte Observer.

Jake’s luck changed for the better when the media covered his story, prompting donations and adoption offers to pour in from across the country. The canine found his perfect fit just 20 miles away in Hillsborough, N.C. with Kim Murray, who promptly traveled to the shelter to meet Jake.

He joins a household with two senior dogs, and the donations made in Jake’s name, including a $1,500 grant from State Farm, covered the adoption expenses and will go toward medical care that is not in the shelter’s budget.

“Throughout his stay with us, Jake was always happy. He seemed to make the best of the situation,” foster coordinator Lois Dixon told McClatchy News. “We may have felt sorry for Jake’s misfortunes, but he seemed to rise above it all. Dogs have the amazing ability to do just that.”