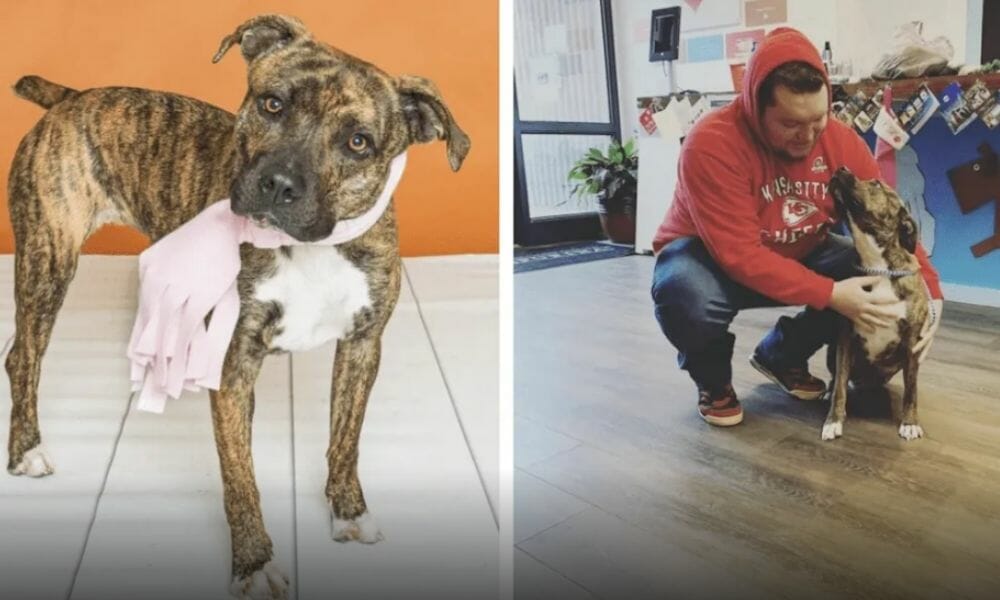 Athena, a disabled pitbull mix from Bourbon, Mo., is happily back at home with her guardian just in time for the new year after vanishing for 10 months.

While recovering from a leg amputation surgery in February of last year, the two-year-old dog disappeared. Her heartbroken guardian, Dylan Summers, searched tirelessly for his companion, but he never found her.

“I searched everywhere for her and posted online but no one came forward,” Summers told KMOV. “I had suspicions that she was stolen but I couldn’t confirm it. I was so worried about her.”

After failing to find Athena, the devastated pet parent eventually decided to adopt another dog to help fill the void in his heart and home. Much to his surprise, he noticed Athena’s picture while browsing the St. Louis-based Gateway Pet Guardians’ website. The pup was listed under the name “Miss-A-Toe.”

Summers called the shelter — located about an hour away from where he lives — and left a voicemail letting them know that they had his dog. Program Director Alisha Vianello returned his call immediately upon hearing the message to arrange for Athena and Summers to reunite.

Athena was one of several dogs rescued by Gateway Pet Guardians from an neglectful situation early last month.

“Everyone involved in her rescue had been so puzzled as to how a dog who not only was spayed but was also healthy and had received a life-saving surgery was on the property with other dogs who seemed likely to have never received veterinary care,” Vianello said.

It looks like life is back to normal for Athena and her guardian, who joyfully reported that “she is already settled back in at home, and it’s like she never left.”