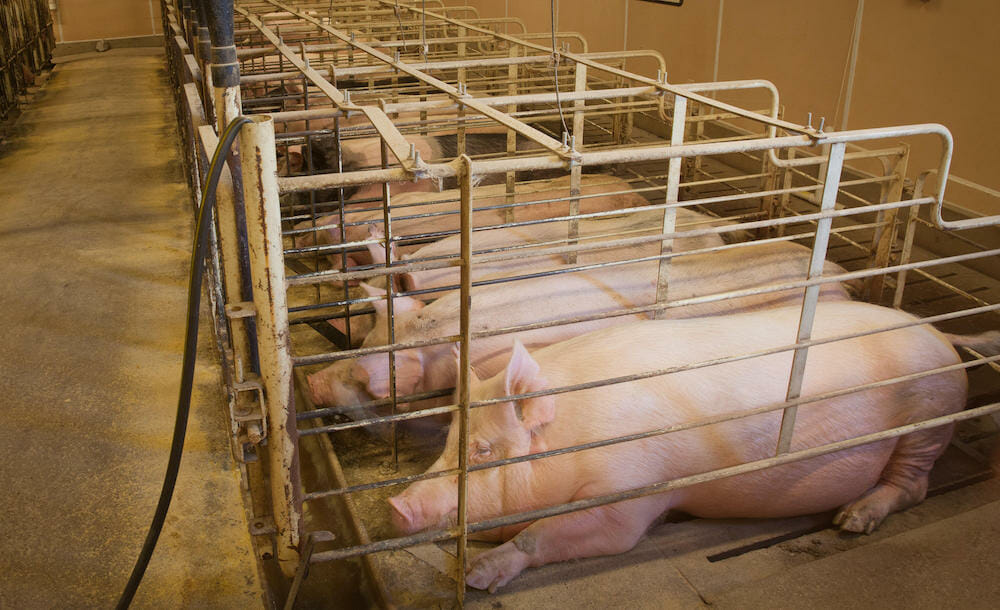 The opening arguments in a challenge before the Supreme Court to Prop 12 — California’s voter-supported, landmark legislation to prohibit sales within the state of “products” resulting from cruel animal confinement — pitted states’ rights to regulate what is sold within their borders against the economic interests of pork producers who have said they won’t comply with the new standards.

Attorneys representing the National Pork Producers Council alleged that Prop 12 violates the interstate commerce clause by creating significant costs for out-of-state pork producers who want to sell their products to California’s market, but who would need to no longer cruelly confine mother pigs to cramped, metal gestation crates in order to do so under Prop 12.

They stated that California’s market power — in reportedly consuming 13 percent of the nation’s pigs — would effectively force farmers elsewhere to comply with the new regulations and that many producers don’t know ultimately where their products are sold. They also said that Californians’ stated moral desire to not be complicit in cruel animal confinement could equally be served by allowing the sale of inhumane products in the state with clear labels, so that consumers could choose whether to buy them.

Jeffrey Lamken — an attorney with MoloLamken LLP representing The Humane Society of the United States, Animal Legal Defense Fund, Animal Equality, The Humane League, Farm Sanctuary, Compassion In World Farming USA, and Animal Outlook — said Prop 12 doesn’t violate the commerce clause, as no one is forcing producers to sell to California and that nothing about Prop 12 prohibits pork producers from keeping their current practices or selling their products outside of California.

He added that allowing cruel products to be labeled, but still sold, within California would keep the state complicit in the cruelty — which he said a majority of California voters (63 percent) had explicitly voted against in 2018, when they passed Prop 12. States have a long-established history of regulating what gets sold within their borders, including based on whether animal cruelty was involved, he added.

Lamken pointed to nine states that have laws that won’t permit in-state sales of cosmetic products that have been tested on animals, and eight states that banned the sale of eggs from hens confined to cages.

“The alternative is that states cannot regulate moral concerns within their borders,” he said.

Prop 12 was motivated by in-state, local interests and the desire from California voters that the State not be complicit “in what the majority sees as abhorrent,” Mongan said.

“Producers are free to choose if they are going to shift to this method,” he said. “People have shown it can be done and that it is being done. This is feasible and already evident within the market.

In addition to asking about the legal principles on which the filed challenge hinged, the Supreme Court justices mainly asked clarifying questions related to possible economic repercussions and state sovereignty, as well as whether economic interests of a select few producers outweighed the moral concerns of a state.

Justice Sonia Sotomayor, in questioning whether farmers can’t separate meat from pigs based on production practices, noted that producers already are labeling and tracking products produced in certain ways – such as labeling pork as “organic,” “crate free” or “antibiotic free.”

She also questioned whether the challengers to Prop 12 were asking the Supreme Court to assign zero weight to California’s moral objections to cruel confinement, while elevating the weight for each dollar of possible impact for out-of-state producers — to which the challengers’ attorneys asserted that moral opposition can’t count.

While most of the morning’s deliberations focused on Prop 12’s moral outrage over cruel confinement, justices also pointed to underlying health and public safety impacts.

Justice Elena Kagan referenced scientific studies that documented raising pigs in intensive confinement can lead to the spread of disease among both sows and piglets, and that pigs given more room may require less antibiotics and so could reduce the extent of antibiotic-resistance plaguing society.

Timothy Bishop, representing the National Pork Producers Council, denied that those studies constituted a “reasonable basis” to allow Prop 12, and also that California’s adopting Prop 12 as a “precautionary measure” was not enough justification under the Pike balancing test, one of the cited legal principles.

Lamken, the attorney representing the animal welfare groups, during his 10 minutes to present noted that California “doesn’t have to wait for people to get sick” before taking action within local residents’ best interest.

Justice Neil Gorsuch said the pork Council’s challenge seemed aimed at protecting particular firms rather than protecting consumers, given that numerous large-scale producers already have announced they’ll comply with Prop 12’s new regulations and that the price of pork reportedly won’t increase for consumers outside of California.

“Other pork producers have said they are happy to step into the void,” he said. “This is about protecting certain production methods and certain producers in certain states, rather than letting the market play out.”

Kagan also questioned how other historical examples regarding state sovereignty and cruelty would apply — such as a state opting not to condone or allow products produced by slaves during previous times.

Ripple Effects of a Ruling

One justice asked Mongan, the attorney representing the State, if California was attempting to “bully” states into compliance given the state’s market power, while another asked how small-scale pork producers would be impacted compared to bigger corporations.

Mongan responded that Michigan and Illinois, both pork producing states, had filed amicus briefs – or ‘friends of the court’ — in favor of upholding Prop 12 and reasserted that state sovereignty allows states to regulate what is sold within their borders.

Mongan also said that small scale producers could sell their products, at a premium price to Californians, or continue business as usual by selling to the 87 percent of the pork market outside of California’s borders.

Bishop, representing the select pork producers, in his rebuttal, alleged that pork producers had told him that being required to treat their pigs humanely by giving them more space would somehow force them to produce “in a way that kills pigs” and makes their operations “inefficient” and “unsafe.”

During opening arguments, attorneys on both sides stated concerns about an ultimate ruling’s ripple effects.

Those who support Prop 12 have warned that an over-turning could have far-reaching repercussions for other state-issued standards, such as for climate, energy, food and agriculture, public health, product safety and food labeling regulations they say also could then be challenged as “unconstitutional.”

The attorneys representing the select pork producers questioned whether allowing California to outlaw products within its borders based on moral objections to production practices would open the door for other states to make similar, in-state sales restrictions: such as Texas refusing any products produced in part by undocumented individuals or Oregon refusing products whose workers weren’t given a certain type of health care or made minimum wage.

An ultimate decision on whether Prop 12 can be enacted isn’t expected until 2023, but you don’t have to wait until then to help pigs. You can start today, by choosing meatless sausage, veggie dogs, and plant-based ham or bacon that no pigs had to suffer and die for.