Cows Crippled and Abused at Mega Farm, Tesco and Others Suspend Partnership 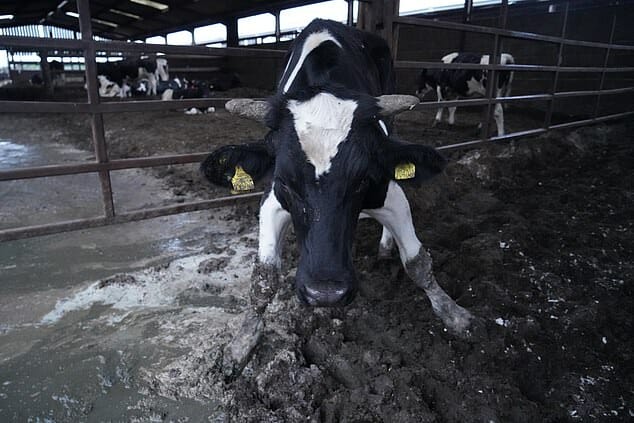 After undercover footage exposed the habitual beating and abuse of crippled cows at a factory farm in England, food retailers have cut ties with the operation.

Major supermarkets Tesco and Lidl and pub chain Wetherspoon will no longer source meat from Berryfields Farm in Daventry, England, after nonprofit Animal Justice Project revealed that farmworkers punched and kicked animals, allowed them to suffer from disease and injury without giving them proper treatment, and subjected them to other forms of cruelty, reported the Daily Mail.

An estimated 4,500 cows raised on the farm each year spend their lives on manure-covered concrete floors — most without adequate shelter from rain or sun — never getting to graze or spend time in grass fields. During the entirety of the investigation, workers never gave the cows fresh bedding.

Lameness, a long-term illness that makes walking difficult for cows, is likely caused by unsanitary flooring, a veterinary professor told the Daily Mail. Left untreated, cows will suffer chronic pain. And that’s exactly what happened at Berryfields Farm, according to the investigation.

Animals that could barely move had trouble walking through the slippery, sloppy conditions of the farm’s floor, falling and further injuring themselves. Some cows couldn’t get up. Workers did nothing to help, and let cows suffer from cuts and overgrown hooves until they took the animals to slaughter.

One video shows a worker hurling a bucket at a cow’s head, knocking the defenseless animal to the floor. Workers regularly yelled at the terrified animals to get them to move, according to the investigation.

“These are disturbing and unacceptable images,” a Tesco representative said in response to the investigation. “We require all our suppliers to uphold high animal welfare standards, and have immediately suspended this farm.”

Berryfields Farms has lost its Red Tractor certification, which is supposed to show high animal welfare standards for consumers.

Another Animal Justice Project investigation at another facility that is part of the Red Tractor program, Badgers Cross Farm, showed workers repeatedly hitting, kicking, and dragging calves by their legs, as they cried out for their mothers.

Between the two investigations, Animal Justice Project found a total of 23 violations of Red Tractor and Department for Environment, Food, and Rural Affairs guidelines meant to ensure more humane treatment of animals on farms, the organization reported.

Unfortunately, inhumane treatment is commonplace at factory farms, where animals live in overcrowded, dirty, and unhealthy settings, denied the simple expression of their natural behaviors. About 73 percent of farm animals in the UK are raised on factory farms, according to Compassion in World Farming.

Animal cruelty like this, along with environmental concerns and health benefits, are likely why more people are now embracing plant-based diets. A Nielsen study showed that in 2019, red meat sales decreased by 185 million pounds in the UK.

Lady Freethinker applauds Animal Justice Project for exposing the horrific cruelty taking place at factory farms in the UK and encourages everyone to consider the benefits of a plant-based diet for us, them, and the planet.