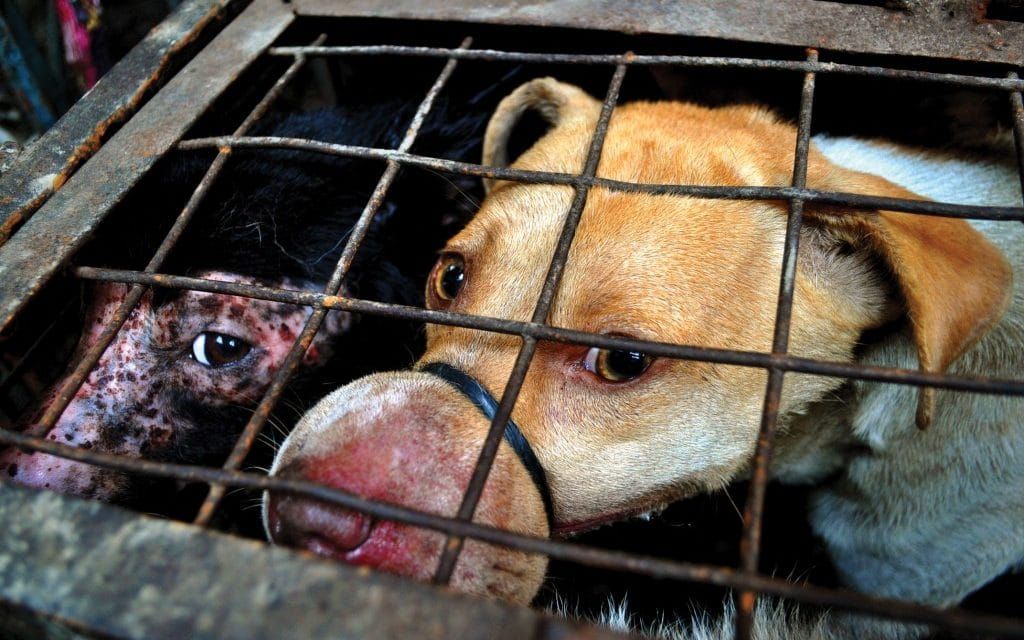 Police in the Anhui province of China busted a gang’s headquarters in October 2017, discovering a stash of poisoned needles used in the capture of canines destined for the dog meat industry. Eight people were arrested on allegations of selling 200,000 modified syringes throughout China. The syringes were altered to be used as darts and filled with suxamethonium, a muscle relaxant which can sedate or instantly kill a dog. During the raid, officers found 8.8 pounds of suxamethonium powder, 10,000 needles and the equivalent of $15,110 in cash.

Dog meat is a highly profitable venture for criminal gangs in China, and the industry is widespread across Asia. In China alone, it is estimated that 10 million dogs are slaughtered for food every year. Many of these animals are family pets who are abducted from people’s homes, or strays off the street. They are drugged and transported long distances without hydration or food, either in sacks or tiny cages. The method of death is equally cruel: often the animals are beaten to death, burned or boiled alive to remove their skins as their terrified companions watch on in terror.

The infamous Yulin Dog Meat Festival held in Yulin, China every June, is highly protested amongst the international community, but in reality it is just a small drop in the ocean, with the dogs killed for this highly publicized event only representing 0.01% of the entire Chinese dog meat trade.

Although livestock farms and slaughterhouses in China must be licensed to ensure the safety of the meat, there are no such regulations for dog meat, making its consumption  a public health issue. The poison that may be used to subdue or kill the dogs can remain in the meat, and the dogs may have illnesses such as rabies, a disease fatal to both dogs and humans.

The apprehension of this gang is a step forward in the fight against this barbaric trade, which has reportedly increased since this method of sedation and abduction was introduced. Police are now increasing their search for similar syringes in the area in order to remove the darts from circulation.

You can help stop the cruelty. Sign our petition to pass a resolution to end dog and cat meat worldwide.