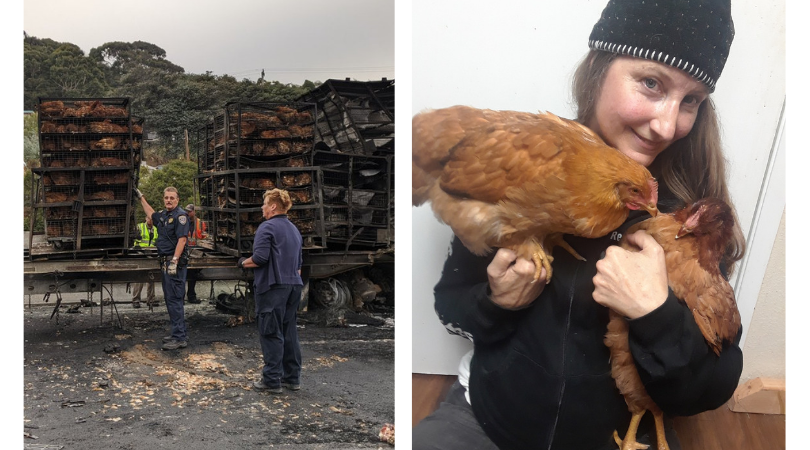 Hundreds of chickens being transported from a chicken farm were the victims of a fiery truck crash on a California Highway on September 5. The truck reportedly carrying up to a thousand chickens swerved, hit another car, and burst into flames.

Many of the chickens escaped, prompting the California Highway Patrol (CHP) to shut the freeway down. Tragically, hundreds more were burned or crushed to death. CHP and Animal Control attempted to retrieve the escaped birds from the highway and surrounding area.

Those that were recovered will be returned to their owner — Pitman Family Farms, a supplier for Amazon.  However, animal activists from In Defense of Animals and Direct Action Everywhere (DxE) managed to rescue three of the chickens.

“The scene was like something out of an apocalypse movie—a smoldering truck and cages crammed full of burned chickens; it was just horrific,” said Anita Carswell of In Defense of Animals. “The crash was a miracle for these three birds who have a second chance at life. We understand that hundreds of surviving hens have been returned to the farm: we call on the farmer to show mercy and spare these animals from being sent to their deaths a second time.”

“I’ve seen inside the disgusting Bay Area farms where chickens are grown and tortured before being squeezed into cages and shipped to their untimely deaths,” said Eva Hamer of DxE, who recovered one of the hens.

Pitman Farms claim to have high animal welfare standards and promote their free-range chickens. But the investigation revealed birds shut inside with no outdoor access, living in overcrowded conditions with several injuries, and even evidence of de-beaking.

While most of the survivors will likely be returned to their inhumane homes or shipped off for slaughter, at least three lucky chickens will go on to lead a long, happy life, thanks to their rescuers.