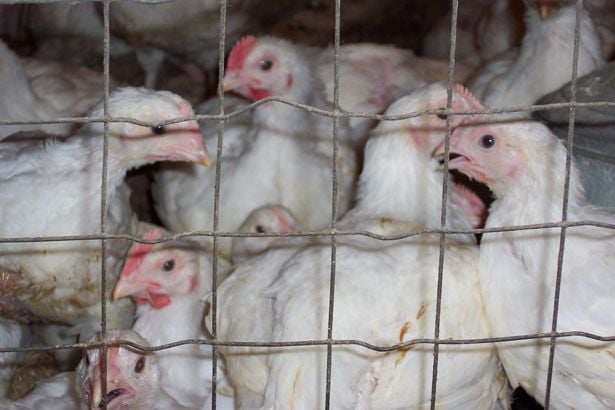 World Animal Protection (WAP) has released a shocking report showing that some of the world’s biggest fast-food giants are failing to address the extreme suffering of chickens raised for their meat in factory farms.

The report, entitled The Pecking Order 2018, is the first such study to look into the issue of the welfare of chickens destined for the dinner table.

Nine of the world’s most well-known fast-food producers were included in the assessment (Burger King, Domino’s Pizza Group, Domino’s Inc, KFC, McDonald’s, Nando’s Pizza Hut, Starbucks, Subway), which looked at company policies regarding chicken welfare, any targets and objectives documented by the companies, and the transparency of reporting progress.

Shockingly, these international powerhouse companies, who make enormous profits from killing hundreds of millions of chickens each year, are doing very little to ensure the animals in their supply chain receive even minimal welfare standards at factory farms or slaughterhouses.

None of the companies rated higher than “Poor” on  WAP’s assessment scale. Not a single one has a worldwide policy for improving chicken welfare; in fact, only three even show an interest in the issue — Burger King, Starbucks, and Subway — however, they only focus on limited regions or countries.

“It is deeply disappointing that not one company that relies on chickens for profits received a grade above poor for animal welfare,” said Alesia Soltanpanah, executive director of WAP US. “Of the ten billion animals raised and killed for food every year in the United States, 90 percent are chickens, and these companies have the ability to have a major impact on the living conditions of these animals.”

With such massive exploitation of animals for consumption, these companies have tremendous power to change the lives of these birds for the better. WAP is asking them to avoid sourcing caged chickens and give the animals a more natural and stimulating environment in which to display natural behaviors.

They also urge companies to use birds that have a healthier growth rate. As farmers adapt to meet increased demands, they select breeds that grow too quickly and suffer from numerous health issues as a result, including pain and lameness, as well as strain on the heart and lungs.

“The findings of the inaugural Pecking Order report leave much room for improvement,” continued Soltanpanah.  “The companies ranked, including seven US-based brands, have a responsibility to consumers and the animals in their care to give these chickens a better life.”

In the meantime, we consumers have the power to stop the suffering by leaving chicken off of our plates and choosing cruelty free, plant-based foods, instead.