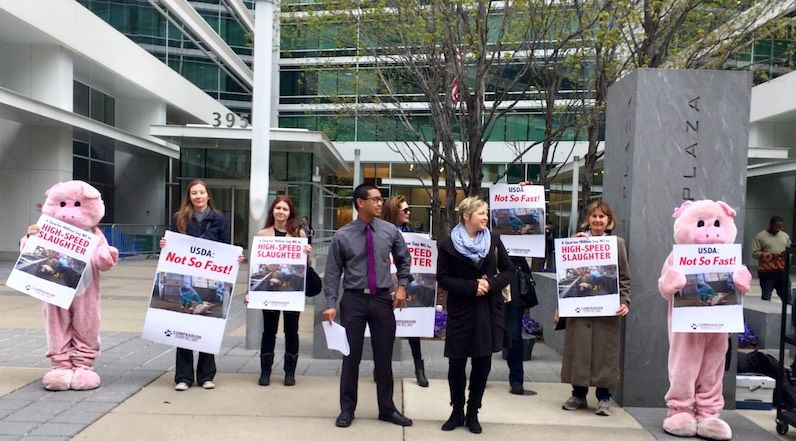 Compassion Over Killing (COK) delivered a petition containing over a quarter-million signatures to the US Department of Agriculture (USDA) this week in the fight to halt the development of the department’s proposed high-speed pig slaughter initiative.

On the 24th of April, COK held a press conference in front of the USDA’s Washington office, where they showed shocking footage recorded during an undercover slaughterhouse investigation. They then presented the petition to the USDA, assisted by volunteers dressed in pig costumes.

Former investigator Scott David spoke at the press conference, where he described the atrocities he had witnessed when working undercover at Quality Pork Processors (QPP) – a facility where the USDA piloted the high-speed program.

“Consumers would be shocked to learn what slides under the radar at these high-speed facilities,” said David. “[Pigs are] pushed, excessively prodded, jabbed, hit, and dragged by workers to keep up with the line.”

Concerned citizens have sent thousands of public comments to the USDA in protest of the proposal, and comments can still be submitted until May 2nd using this link.

The cruel and reckless proposal is named the “Modernization of Swine Slaughter Inspection” — but as COK executive director Erica Meier pointed out, it is “anything but modern.”

“This program actually rolls back progress, jeopardizing millions of animals, workers and consumers,” she said.

Lady Freethinker is part of a coalition of 35 organizations who are standing up against the proposed rule, which cuts down on regulations and allows pig slaughterhouses to kill animals at the alarming rate of around 1300 pigs per hour.

The “Not So Fast, USDA” campaign gained extra support last month when some of America’s top athletes jumped on board to express their disgust about the cruelty of this high-speed program. With the petition delivery and massive outcry, we hope the USDA abandons high-speed slaughter for good.