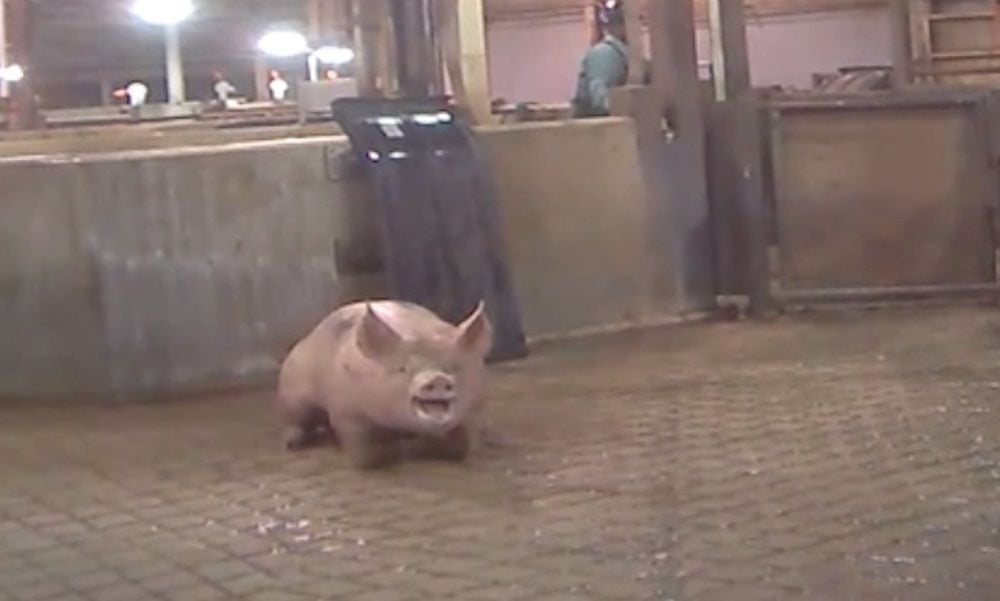 The United States Department of Agriculture (USDA) has proposed a scary new slaughter method for pigs that ramps up kill speed while slashing regulation. This high speed, reduced-inspection program, known as HIMP, shifts key inspection responsibilities to the slaughterhouses themselves, allowing animal abuse and food safety problems to go unmonitored. Under HIMP, 1,300 pigs are slaughtered each hour — about one every five seconds.

During the pilot program, Compassion Over Killing investigator Scott David worked undercover at Quality Pork Processing, an exclusive Hormel supplier, in Austin, Minnesota. What he encountered there was a shocking disregard for animal welfare and federal law.

This video features David recounting his experience, as well as horrific footage from inside the slaughterhouse:

David told Lady Freethinker, “I witnessed workers routinely taking shortcuts in humane handling in an effort to keep up with the faster-than-normal slaughter line speeds permitted under HIMP. I saw sick and injured animals, too weak to stand, roughly shoved out of pens to keep the lines moving.”

In one instance, a pig was not moving through the shoot fast enough, so slaughterhouse workers repeatedly jabbed the animal in the face with electric prods and beat him with rattle paddles. Eventually, they opened the doors on the side of the shoot to let the pig out. The animal started crawling away to flee, his back legs dragging behind him, and David realized they had been trying to force a paralyzed pig to the slaughter area.

In another instance, a pig regained consiousness in the shackles, and David’s coworker, who was training him at the time, turned to David and said, “If the USDA is around, they could shut us down.”

Under the Humane Slaughter of Livestock Regulations, which is federal law, animals are not allowed to be shackled or dragged unless completely unconscious.

“Some animals were dragged across the floor by a metal hook in their mouths before being properly stunned,” said David. “Some of these pigs likely went on to be scalded alive, as the workers didn’t always bother to stop the line to re-stun them.”

Not only does HIMP escalate animal cruelty, it puts the health of consumers and workers at risk. David recalls pigs covered in feces or pus-filled abscesses being slaughtered and processed for human consumption. Workers are prone to injury and stress under the pressure of the facility’s high operating speeds.

With this method of slaughter, the USDA essentially gives the profit-driven pork industry a “free-pass” to regulate themselves. David recently brought evidence of the abuse and food safety issues to the White House’s Office of Business and Management (OMB) and the USDA’s Food Safety and Inspection Service to argue that HIMP is dangerous for food safety and animal welfare nationwide.

Presently, only five slaughterhouses operate under the HIMP pilot program — but if the OMB approves the policy, it may be expanded across the country. Let your voice be heard — protect pigs, slaughterhouse workers, and consumer health by signing COK’s change.org petition to stop HIMP today!