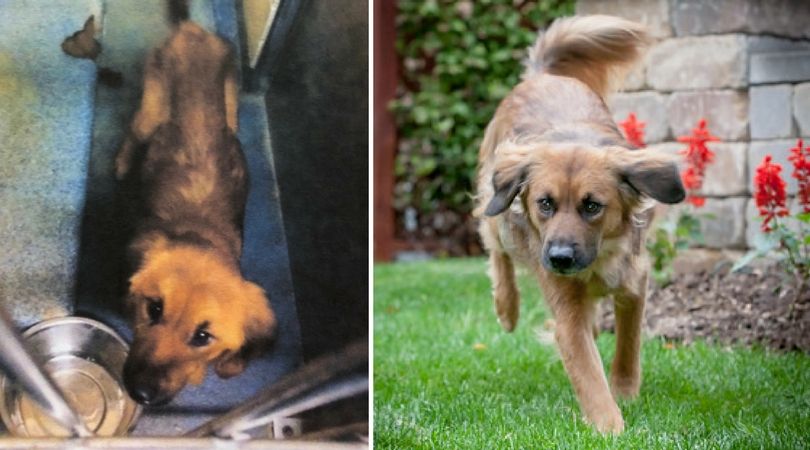 In late 2011, a frightened, emaciated dog was found abandoned in a foreclosed house after his former owners moved out. But this once-neglected canine now has a fabulous life thanks to the team at Every Dog Counts Rescue (EDCR) in Indianapolis.

The dog, later named Rudi, was severely malnourished, covered in fleas, and suffering from severe mange.

“Rudi was extremely timid, scared and underweight when he arrived at the shelter,” said Jennifer Eads, a volunteer at EDCR. “He was covered in fleas and had the rear half of his fur missing due to mange. We really weren’t sure what his fur was going to look like because it was in such bad shape.”

Life for Rudi now is a stark contrast to his former life. Adopted by Eads, who also fosters dogs for EDCR, he now has a big backyard to play in, along with his own La-Z-Boy recliner and a big-brother golden retriever who adores him.

Although this sweet rescued pup still carries some trauma from his past, he is a loving and loyal companion.

“Even to this day he still cowers if anyone raises their voice for any reason – people don’t know how their neglect/abuse harms dogs long term,” says Eads. “But he’s blossomed into a handsome little loving guy.”

EDCR is a non-profit organization run by volunteers who save the lives of dogs in desperate situations, and pull death-row dogs from high-kill shelters. The dogs are given medical treatment and cared for in foster homes until they are adopted locally or transported to other rescue partners throughout the country to be re-homed.

“Every Dog Counts Rescue believes that truly every dog counts, regardless of age, breed, injury or disability,” states EDCR. “We believe if they still have the ability to enjoy a quality of life, they deserve that chance.”

The heroes at EDCR also provided badly needed care for four-month-old puppy Halsey, who was recently pistol-whipped and savagely beaten. Lady Freethinker has posted a petition calling for Halsey’s attacker to be prosecuted to the fullest extent of the law.