Years After Having Her Mouth Taped Shut, Caitlyn the Dog Is Living Her Best Life 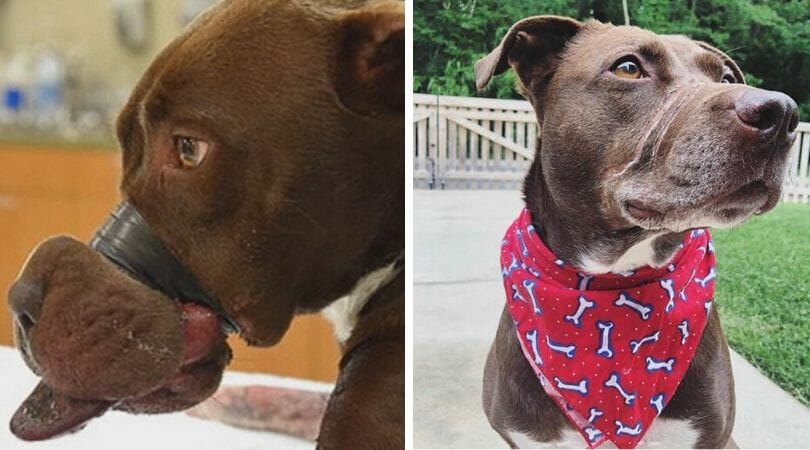 Caitlyn the dog — who made international headlines when horrifying images of her mouth being taped shut went viral — is many years removed from that gruesome tragedy and doing better than ever.

In 2015, a civilian found Caitlyn wandering around the streets of North Charleston, S.C. with electrical tape squeezing her snout shut so tight she couldn’t eat or drink. As a result of the dog’s mouth being taped shut, Caitlyn suffered severe nerve damage and required extensive jaw reconstruction surgeries to fix it. Heartbreaking photographs of the then-15-month-old dog’s injuries appeared online and prompted widespread demands for justice.

“That initial image is what sparked the worldwide outrage,” Kay Hyman, director of community engagement at the Charleston Animal Society, told the Post and Courier, “as well as on a local level the ability for this case to move quickly.”

Veterinarians doubted Caitlyn would ever fully heal — the dog’s lips were smashed, and vets considered amputating her blackened tongue, according to Hyman — but she kept on fighting.

Soon after the story went viral, prosecutors brought criminal charges against Caitlyn’s abuser, William Leonard Dodson, who claimed he taped the dog’s mouth shut because she wouldn’t stop barking. Dodson pled guilty and was sentenced to five years in prison — the maximum sentence in South Carolina for animal cruelty. In 2017, the judge denied him parole, and he was later sentenced to 15 years for an unrelated charge.

Ted Corvey, the lead prosecuting attorney in Caitlyn’s case, adopted her from her long-term foster care family in 2017. Despite physically recovering from her injuries, Caitlyn remained nervous around men because of the emotional trauma she suffered at her abuser’s hands.

“So much of that fear is gone,” Corvey told the Post and Courier. “She’s come so far. And she is doing so well. And she is one of the sweetest and most loving dogs I’ve ever known.”

Last week marked the five-year anniversary of Caitlyn’s arrival at the Charleston Animal Society, where she began her long road to recovery. Caitlyn’s story reminds us that there is hope for all abuse survivors.