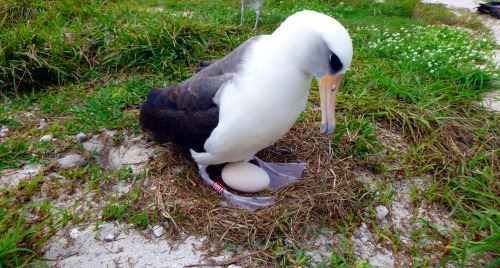 The oldest known wild bird in the world has broken more records and again astounded researchers by laying another egg at the ripe old age of 68.

Wisdom is a Laysan albatross who is believed to have hatched in 1951. She was first tagged by scientists at around five years of age at the Midway Atoll national wildlife refuge, and has been observed ever since.

Although albatrosses do have an impressively long life, Wisdom is the only one confirmed to have lived this long. Before her, the oldest recorded individual was a 53-year-old male.

Albatrosses mate for life, and Wisdom has been known to be paired with her partner Akeakamai since 2006. Every year, this species returns to the location where they were hatched and fledged. In Wisdom’s case, home is Midway Atoll, a small collection of islands in the Pacific Ocean. During winter, around one million Laysan albatrosses return here to reunite with their mates and breed.

Because the process of hatching and rearing a chick is intensive and exhausting — taking around seven months — most birds only lay eggs every second year. But not Wisdom; she has stoically laid eggs and fledged chicks for nine out of the last ten years.

Akeakamai, as with all males, has played a large role in the process. Co-parenting is important for this species, and males and females share the responsibility of incubating and raising their single chick.

When they’re not parenting, albatrosses are out at sea; they spend an estimated 90% of their lives on the wing. Scientists studying Wisdom estimate she has flown more than six million miles in her lifetime.

This awe-inspiring bird is thought to have raised more than 36 chicks. She and her chick even survived a devastating earthquake and tsunami that hit the atoll in 2011, killing more than 110,000 albatrosses.

Scientists will continue to monitor Wisdom over the years, using the data collected from this more than great-grandmother — along with her offspring — to discover more about the lives of this amazing species.

“Midway Atoll’s habitat doesn’t just contain millions of birds, it contains countless generations and families of albatrosses,” said Kelly Goodale, a fish and wildlife service refuge biologist. “If you can imagine when Wisdom returns home, she is likely surrounded by what were once her chicks and potentially their chicks.”