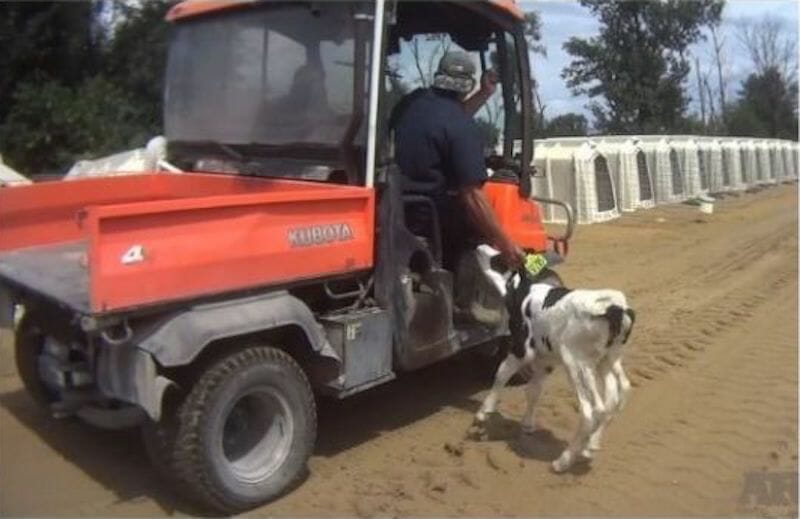 Officials have charged three ex-employees of Fair Oaks Farms in Indiana with misdemeanor animal cruelty after a video showed the workers beating and kicking newborn calves, and dragging them around with tractors by their ears.

The brutalities exposed in the video also included workers force-feeding calves until they couldn’t breathe, throwing them around, hitting them with steel rods and burning them with branding irons. The cows were forced to live in extremely hot, cramped and dirty conditions, and dead calves were just thrown into a heap on the ground and left to rot.

The disturbing video was the result of an investigation at the farm from August to September 2018, when a member of the animal rights organization Animal Recovery Mission went undercover as an employee and discovered the abuse.

In a statement on the farm’s website, Mike McCloskey, who owns Fair Oaks Farms as well as Fairlife dairy products, said: “I am disgusted by and take full responsibility for the actions seen in the footage, as it goes against everything that we stand for in regards to responsible cow care and comfort.”

However, the planted employee claims that the owners of the farm — which is also a tourist attraction that boasts 500,000 annual visitors — were not only fully aware of the abuse, but also complicit in it.

“The video footage is being translated and further interviews will be conducted to determine if allegations of complicity by the planted employee or others are in fact true,” said Newton County Prosecutor Jeff Drinski.

“Due to the many years Fair Oaks Farms has been in business, it is impossible to number the amount of calves and cows that have inhumanely died at the hands of this company,” commented Animal Recovery Mission spokeswoman Rachel Taylor.

The investigation is ongoing.