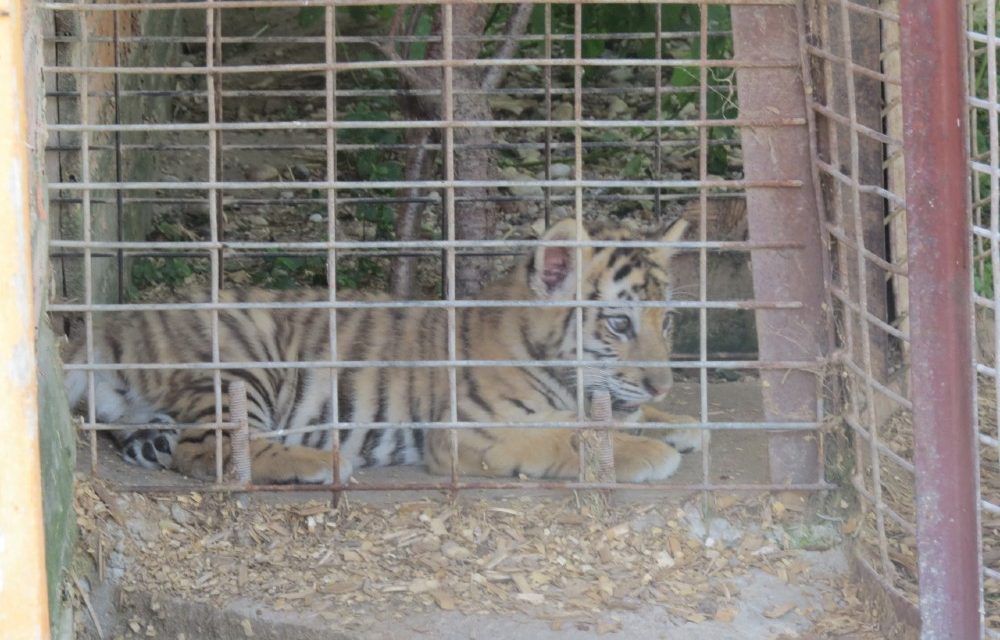 A roadside zoo in Wisconsin recently was fined more than $6,000 for violations of the federal Animal Welfare Act (AWA) – including for conditions involving big cats and cubs – and currently is under ongoing federal investigation.

Animal Haven Farm, a for-profit business in Weyauwega owned by Dawn Hofferber, bills itself as a “family owned zoo just minutes from Highway 10,” with admission set at $12 for adults and $8 for children as of mid-June, according to the zoo’s Facebook page.

Federal inspectors have documented violations at two of the farm’s three inspections this year so far, including loose animals, numerous enclosures in need of repair, and bison, bears, and a pig in muddy enclosures lacking adequate drainage during an April inspection and rabbits with crusted and scabbed ears and a hole in a juvenile tiger pen that inspectors noted could injure the animals during a January inspection.

Those violations are in addition to numerous documented noncompliances outlined by the U.S. Department of Agriculture (USDA) in a citation and penalty notification, issued in February and filed by the USDA as a “settlement agreement” in March, that fined Animal Haven Farm $6,450.

According to the document, Animal Haven Farm reportedly in May 2021 allowed a young tiger cub to be exposed to a dog and also exhibited a 3-week-old tiger cub named Dozer to a classroom, where school-aged children allegedly “were allowed to pet the animal.” The document also reports that Dozer also “participated in photograph opportunities during the exhibition” despite not having a fully-developed immune system.

A liger at Animal Haven Farm’s property left without water for  “about 20 hours” drank for at least four minutes when provided with fluids and rabbits lacked adequate veterinary care and shade during an August 2021 inspection, a brown Texas Dall lamb who was walking “in a weak, hunched manner” had “signs of scours” in November 2021, and four prairie dogs also escaped an enclosure in November 2020, according to the settlement agreement and inspection reports.

Dawn Hofferber, who spoke with Lady Freethinker via telephone, said that she disagreed with the USDA findings.

“We have a vet who comes out here all the time,” she said. “We do everything to take care of these animals, and we take very good care of our animals.”

Hofferber said the situation with the liger was a “freak” incident. She denied that the school aged children were allowed to pet Dozer and also denied that Dozer was 3-weeks-old during the exhibition, saying he was only “three or four days” away from the USDA requirement of 8 weeks, when the agency says cubs’ immune systems are developed.

“Our veterinarian gave approval to the cub before he went, and he checked it when he went back,” she said. “It was there for an educational talk. It was by a girl who had worked for us for three years. She is going to be a teacher. She is in school right now.”

Hofferber said she did not appeal the USDA findings. She also said she paid the fine.

“I paid the fine not because I felt I was guilty,” she said. “I told the USDA right to their face I would do this all over again. ” 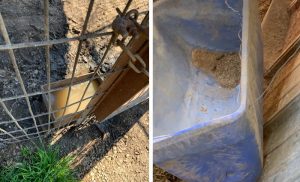 Public records documents show Animal Haven Farm has had violations documented at 10 of 22 inspections back through 2014 — or 45 percent — for a total of 27 documented violations, with the most recent noncompliances found by federal inspectors during the farm’s most recent inspection on April 14, according to USDA documents.

Hofferber took issue with the word “violation” to describe the noncompliances with the minimum standards of animal welfare required by the federal Animal Welfare Act that had been documented by federal inspectors.

“You people take them as violations, you think it’s something humongous and it’s not,” she said.

Of the 27 documented violations, inspectors cited Animal Haven Farm with three critical, five direct, and 19 non-critical violations. The farm had 167 animals on-site during its most recent inspection in April, according to USDA documents.

Photos obtained by Lady Freethinker, via public records request, show a 1-year-old male lion cub in 2014 in a corner of his enclosure with his tongue hanging out, with the corresponding USDA report noting he appeared to be “in abnormal condition,” with an inspector writing the cub was “unwilling to walk, with visible twitching of the head and face” and had “signs of irregular eye and tongue movement.” 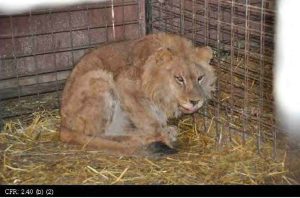 The inspector, after noting that a veterinarian reportedly had seen the cub in the fall of 2013 and that the cub was under treatment, ordered an immediate re-evaluation by the vet, noting “the lion appears to not be responding to the present treatment.”

The public records photos also show a male alpaca with a wounded front leg, with the corresponding report from 2016 noting a shearing injury had caused a gash that was 6 to 8 inches long and 3 inches wide. 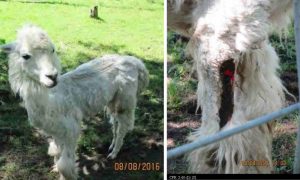 The USDA also withheld several documents requested by Lady Freethinker, saying on June 14 that releasing the information “would harm the agency’s open investigation.”

Other violations documented by federal inspectors throughout the years included rotten food and soiled waste covered in flies in a rabbit enclosure, a potbelly pig whose canine tooth was growing into his cheek, an African crested porcupine with eye issues, an alpaca and goat with respective overgrown toenails and an abnormally growing hoof, a lack of shelter to protect eight Jacob sheep from inclement weather, and a lack of barriers to prevent members of the public from coming into contact wtih two camels and three kangaroos.  Sale records for two tiger cubs also weren’t available during an inspection in June 2021, according to the reports.

Animal Haven also has a controversial past, with nonprofit People for the Ethical Treatment of Animals alleging the farm picked up two 8-year-old lions in 2018 from the notorious Joe Exotic, and with Urban Milwaukee and the Wisconsin Watch noting in 2015 that one of Animal Haven Farm’s owners had reportedly offered to give two tigers to an ABC 20/20 reporter who visited the farm.

Members of the public also have written in with concerns, with numerous complaints filed with the Waupaca County Sheriff’s Office, and from social media users alleging that Animal Haven Farm separates tiger cubs from their mothers for their operations.

Sheriff’s deputies who inspected the property reported not finding any major issues at Animal Haven farm in May, August, and October of 2020, and June and September 2021, according to public records documents obtained by Lady Freethinker via public records requests. 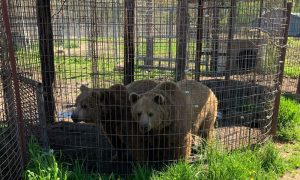 But deputies did report issues after following up on an animal problem complaint in August 2021, when USDA inspectors also were present, regarding rabbit care, with the deputy noting that “agents from the USDA added the cleanliness of the enclosures needed to be improved.”

Hofferber denied separating cubs from their mothers for profit. She said that Dozer reportedly was separated from his mother after the mother tiger dropped him into a water tank after his birth. In a Facebook post from July 22, 2021, Animal Haven Farm also mentioned other cubs who were being cared for by humans at the facility who reportedly had been “refused” by their mother.

“Unfortunately their mother refused to care for them,” the post says. “So the cubs were brought into human care… and yes, cuddled and loved on, their faces washed with a wash clothe (sic) as a mother would do. We would have loved if the mother had raised her cubs however sometimes mothers don’t want to be mother’s (sic).” 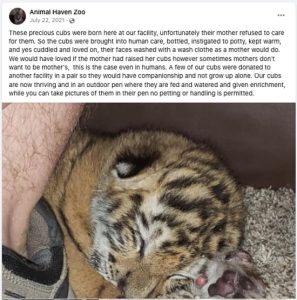 The post also notes that “a few” of Animal Haven’s cubs had been “donated” to another facility.   The farm’s social media posts, which have been set to limit who can comment, also advertise that people can take pictures of the tiger cub pen but “no petting or handling is permitted.”

A profile for Animal Haven Farm published by Dun and Bradstreet, which tracks the income of private businesses, puts the farm’s annual revenue at $80,777.

We’d like to remind our readers that while roadside zoos or animal exhibits may seem “fun” or harmless on the surface, the animals involved often suffer. We strongly urge everyone to choose animal-free “entertainment” options instead. 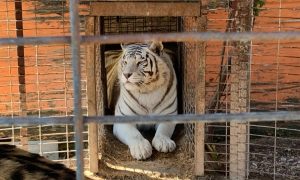