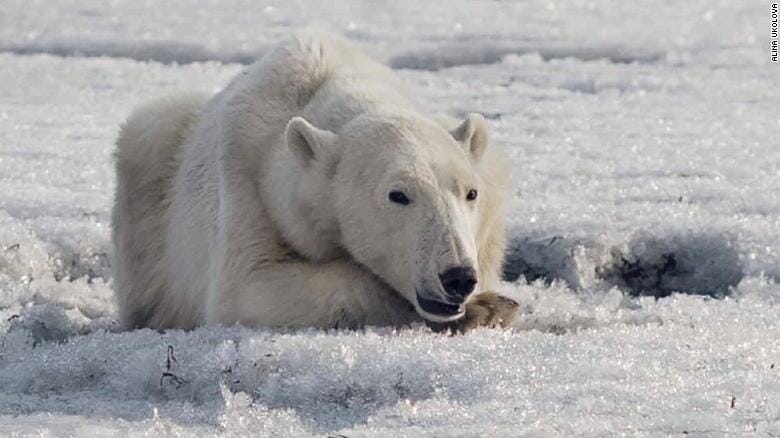 A lone polar bear has strayed far from home, appearing in the small Russian village of Tilichiki this month.

According to Greenpeace activist Vladimir Chuprov, the nearest polar bear population to the village is in Chukotka, around 700 kilometers away.

It is thought that the bear arrived in the area via a floating piece of ice and is unable to return without assistance.

Locals have been keeping a close eye on the bear, some feeding fish to the weak and exhausted animal, and many posting videos and photos on social media.

“The bear is about two years old,” Alina Ukolova told CNN. “It is not very used to living independently, they usually live with their mother until they’re about three. It is exhausted, not aggressive. Locals feed him fish, and he eats it. Today, it felt better and went hunting.”

Polar bear populations worldwide are extremely vulnerable to the rapid changes brought on by climate change. Dependent on their icy habits to hunt for seals and fish, the WWF estimate that global numbers will decline by 30 percent in the next 20 years.

While many populations are considered to be stable, the numbers in Russia are not; they are classified as rare or recovering.

“In the conditions when the very ice edge where (polar) bear hunts and survives is being lost due to climate change, the Arctic is getting warmer, hunting environment gets smaller and less convenient,” said Chuprov. “The ice is receding, and (polar) bears look for new ways to survive. And the easiest way is coming to people.”

Local officials are planning to help the bear — nicknamed Umka — return to his home, but need time to sort out the logistics of sedating and transporting the large animal.

In the meantime, Tilichiki residents will monitor their rare visitor, hoping he survives long enough to go back to his rapidly disappearing Arctic home.