Once Destined for Slaughter, Rescued Water Buffalo Now Gets to Splash and Play 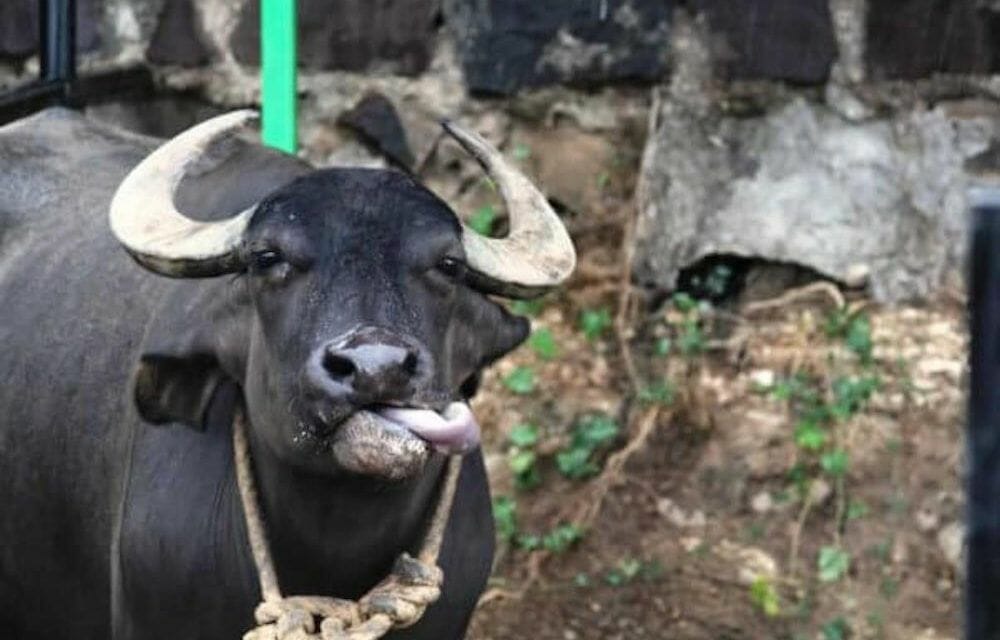 We don’t know much about Kalu’s background, but his parents likely served as some of India’s many “working animals” — the buffaloes, donkeys, bulls, and other creatures forced into labor for human exploitation. But Kalu was luckier than most. He was rescued, and now gets to splash and play with his friends at Animal Rahat (Relief), a PETA-supported sanctuary.

“Kalu was so small that when he was taken to Animal Rahat’s sanctuary in India he was delivered in a bicycle basket,” according to PETA. “He was just 15 to 20 days old and had been deprived of his mother’s milk, so he was painfully thin. He was about to be sent to slaughter when his owner decided to save him and give him to Animal Rahat.”

Today, Kalu has adjusted to a beautiful life of romping with other animals and splashing in the water. His caretakers are attentive, regularly providing satisfying scratches between his horns.

“During the rainy season, he’s able to swim, and during the summer, his caretakers sprinkle water on his body four or five times a day, much to his delight,” says PETA.

Sanctuaries like Animal Rahat offer peaceful retirement for overworked bullocks, donkeys, horses, and other animals. This organization even provides Indian communities with funds to keep former “working animals” in the family.

“By providing them with a small subsidy, the group can ensure that bullocks past working age can retire and spend the rest of their lives with human families, who are relieved not to send these animals to the butcher’s knife in order to be used for jackets or shoes.”

Unfortunately for animals, working for humans is often dangerous and degrading. Some are forced to pull heavy loads; others are used in the abusive dairy industry, where females are repeatedly impregnated and have their babies stolen so their milk can be consumed by humans. Male calves are deemed useless and face possibilities of slaughter and skinning for leather. Other animals are literally worked to death.

Fortunately, Kalu’s story has a happy ending. It’s up to us to help save other animals from abuse and slaughter, too.