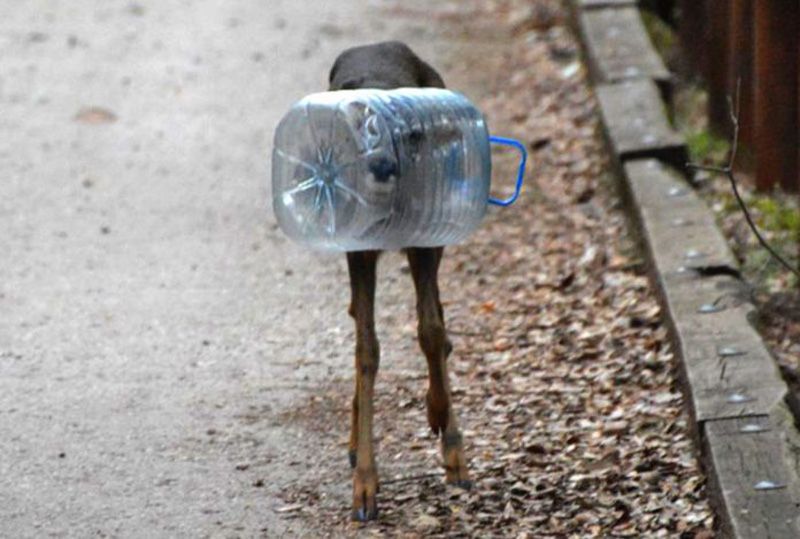 A devastating photo of a deer in Spain with its head caught in a plastic jug has gone viral, providing us with a sobering reminder to be responsible about how we dispose of plastic waste.

The photo was shared by photographer Mentxu Sotelo, who reported feeling ‘outraged’ at the sight of the deer. Sotelo went on to explain that he tried unsuccessfully to remove the container from the distressed animal’s head: “We tried to grab it but it fell into the ravine below and we could not do anything.”

He continued: “I think that in this case, an image is worth a thousand words…Maybe we all think about our actions because only with our individual actions we can do much, much more than we think.”

Unfortunately, this isn’t the first case — by far — of an animal getting caught in plastic materials improperly disposed of by humans. Earlier this year, a deer in Auburn, California was discovered with a peanut butter jar stuck in its mouth.

In that case, personnel from the California Department of Fish and Wildlife captured the deer and released it back into the wild after a veterinary examination; but not all animals are that lucky, including the deer in Sotelo’s photo.

One of the main ways plastic waste harms both land and marine animals is by entangling or trapping them. Animals may also mistake plastic for food and eat it, and can ultimately die from malnutrition.

Although people have little control over where their waste ultimately ends up, we can do things at the individual level to reduce the harmful effects of plastic. In addition to disposing of plastics properly by recycling them and not littering, you can engage in waste-reduction practices such as finding new uses for plastic containers, not using straws, and cutting back on your purchases of products with harmful plastic packaging.