Most cats discard the “runt” of their litter – but new mom Plop was not most cats. Plop made her tiniest baby, P, her first priority. When Plop picked the kittens up to move them for the first time, she took P first. Although P is now full-grown, the mother and daughter remain inseparable.

Before P was born, Plop’s owner, Alex, found the stray cat circling her house and meowing at the windows and took her in. A few weeks later, Alex discovered that Plop was pregnant. The kittens came soon after; and, at first glance, nothing seemed different about the runt of the litter, P – aside from her diminutive size. However, Alex soon noticed that a small birth defect had claimed a part of P’s nose. Plop’s smallest baby could not breathe with her mouth covered, making it impossible for her to nurse.

Vets hinted to Alex that the tiny kitten might not survive, and that perhaps it would be better to give up. Although she’d never bottle-fed an animal or cared for a pet with special needs, Alex refused to consider putting her to sleep. Plop believed in P, so Alex did, too.

Alex’s dedication to saving P’s life paid off. Although P remains much smaller than a typical adult cat, she grew up healthy and thriving. Alex considers P her “best friend.” When P is not frolicking around with Plop, she can be found at Alex’s side!

Too often, euthanasia is treated as a first option rather than a last resort, meaning that animals like P do not receive the fighting chance that they deserve. Fortunately, P’s story has a happy ending, thanks to Alex’s compassion. Unlike many runts, who grow up without a mom to look out for them, lucky little P has two: Alex and Plop. 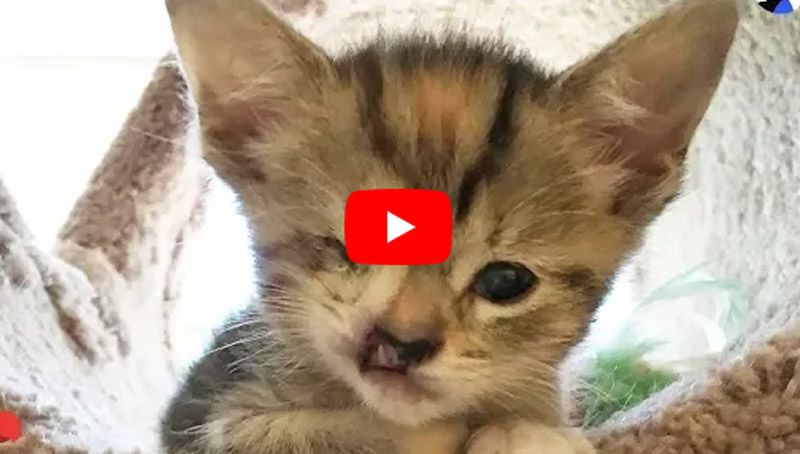