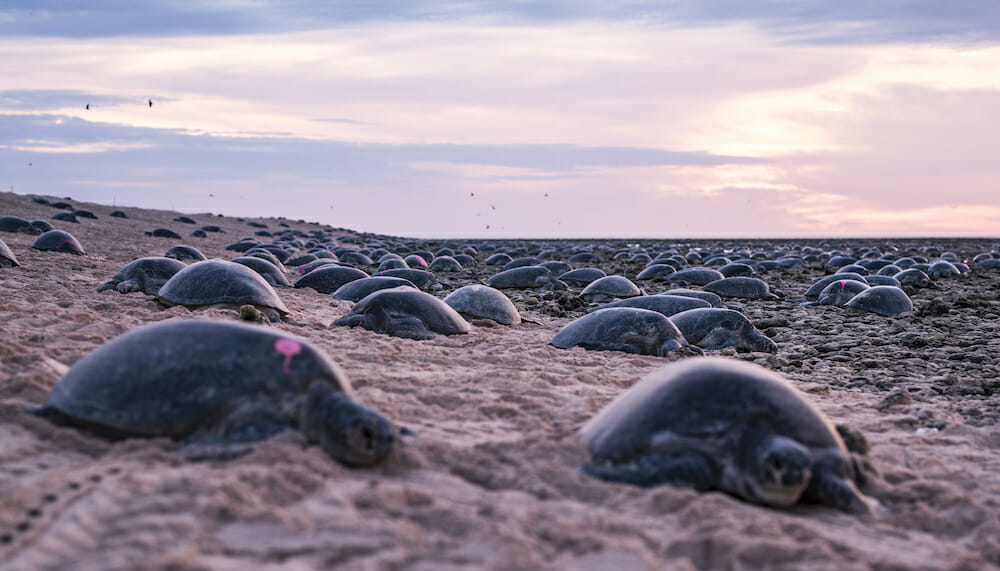 Researchers at the world’s largest green turtle rookery recently revealed incredible footage of thousands of turtles swimming near Raine Island, Australia, before they head to the shores to nest.

Taken in December 2019 as part of the Raine Island Recovery Project, the video comes from drones, which are used to survey turtle populations more safely and efficiently than counting the animals from boats.

“Previous population survey methods involved painting a white stripe down the green turtles’ shells when they were nesting on the beach,” said Dr. Andrew Dunstan from the Department of Environment and Science (DES). “From a small boat, we then counted painted and non-painted turtles, but eyes are attracted much more to a turtle with a bright white stripe than an unpainted turtle, resulting in biased counts and reduced accuracy.”

Dunstan says research has discovered that drones, or Unmanned Aerial Vehicles (UAVs), are the most efficient survey method. The videos can be analyzed frame by frame, lowering observer error and enabling more accurate counts. The data can also be gathered more quickly and permanently stored.

Using the UAVs, the research team found that up to 64,000 turtles were swimming around the island, many more than was previously thought.

“We were underestimating that a lot,” Dunstan told CNN. “We’re finding 1.73 times as many turtles with the drone and as we do when we directly compare with the observer counts.”

Green turtles are under threat due to a decline in suitable nesting sites, hunting, overharvesting of eggs, and drowning due to becoming ensnared in fishing equipment.