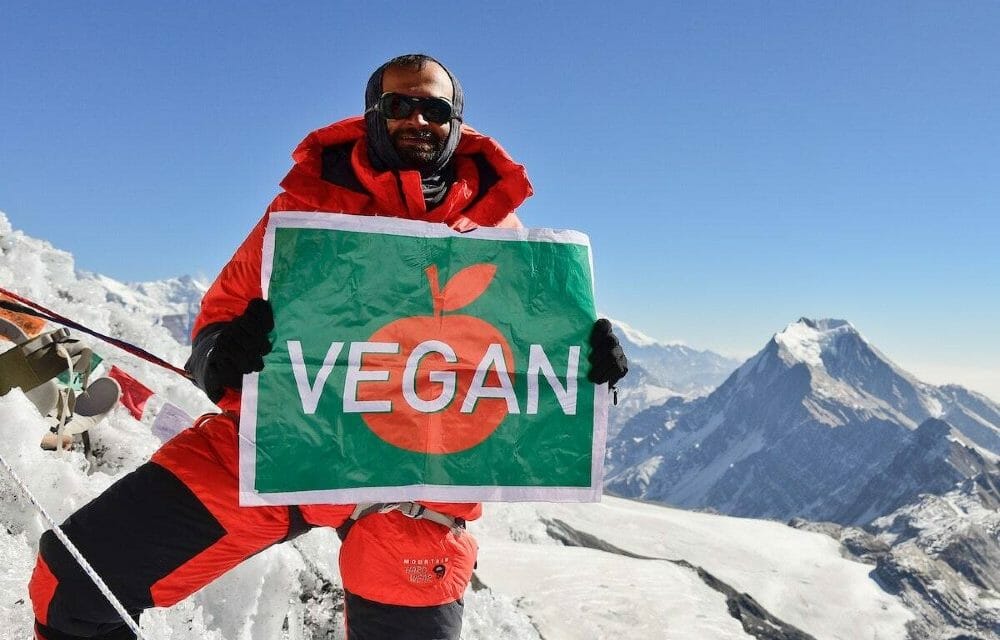 Kuntal Joisher now joins that list as the first reported vegan climber to reach the summits of some of the world’s tallest peaks —including scaling Everest twice!

Joisher, a life-long vegetarian turned vegan, made the perilous trek up Everest in 2019 fueled by a 100 percent plant-based diet from the desire to raise awareness about the animal abuse inherent in the global industrial food system.

Summiting Everest is extraordinarily difficult in the best of circumstances, but Joisher’s journey to the “top of the world” was unusually treacherous, even by Everest’s standards. After seven years of training and preparation, Joisher made his first attempt in 2014, only to have his route cut short when some massive ice blocks that make up the notorious Khumbu Icefall fell, killing 17 people.

Shaken but undeterred, Joisher returned again in 2015 and had just completed the acclimatization phase in preparation for the push to the top when a 7.8-magnitude earthquake hit Nepal.

“The earthquake induced a massive avalanche while I was at the base camp,” Joisher told Condé Nast Traveller. “It was almost like a tsunami of snow and ice. I couldn’t run in any direction.”

With help from a fellow climber, Joisher survived, but the entire camp was destroyed.

“It was a massive tragedy,” Joisher told Condé Nast Traveller. “It didn’t make sense to climb a mountain, in those circumstances. So, we abandoned our expedition.”

But the Joisher’s rendezvous with Everest wasn’t over. He had aspired to become an ambassador for the vegan lifestyle, but during his first successful summit, he had made his climb in a reported cruelty-free feather jacket.

That did not sit well with him.

“Ultimately, it clashed with my ethical beliefs,” he told The Red Bulletin. “I knew I had to go again, and I had to find a company willing to make me a vegan suit.”

He put out a request on Facebook. Before long his appeal was answered by Save the Duck, an Italian sustainable-clothing brand whose products are 100 percent vegan and cruelty-free. The company designed a high-performance vegan suit — a first of its kind in outerwear — for Joisher that would withstand temperatures of -50°C (-58°F) and wind speeds of up to 100kph.

In May of 2019, Kuntal finally reached Everest’s summit: 100 percent vegan fed and outfitted.

“Knowing that no animals suffered or died for my dreams to come true was relieving,” Joisher Condé Nast Traveller. “It gave me a mental edge, because mountaineering is as much about mental well-being, as it is about physical fitness. Whenever I needed that extra boost, the vegan aspect would propel me forward.”