Plant-Based Lifestyles Could Be the Key to Humanity’s Survival, Experts Warn 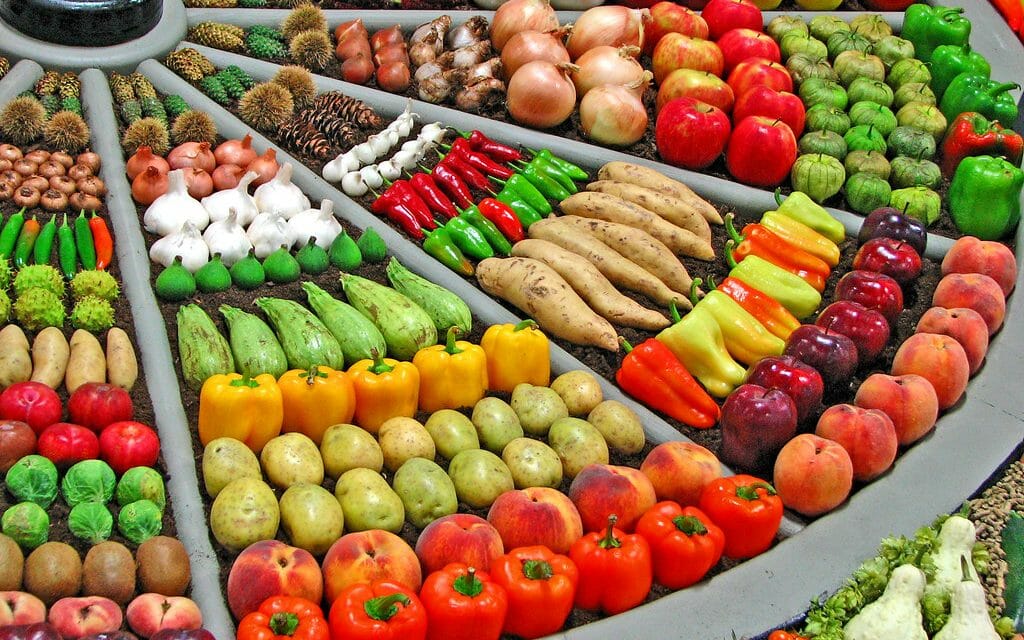 A future for humanity is going to require an increasingly plant-based future for food, experts said recently during a virtual panel discussion.

The COVID-19 pandemic has disrupted global agricultural supply chains, shut down multiple meatpacking plants due to outbreaks, and increased food insecurity for hundreds of thousands of people worldwide.

Recently, several experts gathered virtually to discuss exactly what that means for the future of our species, our planet, and our food, as part of a “Learning from the Pandemic” series, sponsored by Bayer and hosted by the Association of Foreign Press Correspondents (AFC-USA) and the National Press Foundation.

The situation, at the outset, seemed grim. Even prior to the pandemic, people’s eating habits overall were — well — unhealthy.

Dr. Walter Willett, a professor of epidemiology, nutrition, and medicine at Harvard University, detailed how more than two billion people worldwide lack essential nutrients like iron and vitamin A. He also noted that while estimates classify 155 million children as “stunted” because of poor nutrition, two billion adults are sitting at the other end of the spectrum as overweight or obese — including 42 percent of the U.S. population.

Experts have long warned that food and climate change must be examined together, given that agriculture accounts for 24 percent of global greenhouse gas emissions and 10 percent of U.S. emissions.

That was a key point for the director of the Harvard University Center for the Environment and climate researcher Daniel Schrag, who noted that technology and behavior change alone likely won’t divert people from the crash course we’re on.

But both he and Laura Reiley, a business reporter who covers food-related issues for the Washington Post, offered rays of hope. Reiley noted that many more people — including millennials and Gen Z, who grew up hearing about climate change — are willing to make the switch to plant-based eating for environmental reasons.

The speakers seemed united in their message that the destruction — or salvation — of the human species could very well depend largely on the choices we are about to make when it comes to our food.

Plant-Based Eating Is Better for Your Health

Willett reported that when scientists delved into a number of complicated food-related ratios and factors, plant-based options inevitably came out as the winners.

Plant-based proteins like tofu, almonds, and lentils have the best ratios of polyunsaturated to saturated fats when compared to other sources, including processed meat, fish, dairy, and poultry.

That means less cholesterol — and less risk of cardiovascular disease — for people who ‘beef up’ on plants, rather than animal-derived proteins. Diets high in nuts, legumes, whole grains, fruits, and veggies also scored better for other disease outcomes than their animal-derived counterparts, Willett said.

And when it came to mortality rates — literally life and death — people who ate plant-based diets lived longer and healthier lives. The worst mortality rates, by contrast, came from diets high in processed meats, followed by unprocessed meat and eggs, fish and dairy, and then poultry. 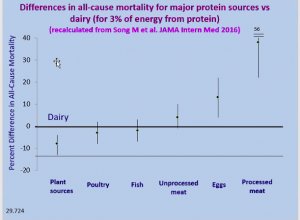 A chart showing mortality rates based on diets, via a virtual presentation by Dr. Walter Willett, professor of epidemiology, nutrition, and medicine at Harvard University.

The science was strong enough for Willett and the EAT-Lancet Commission to recommend that at least two-thirds of people’s diets should come from plant-based sources whenever possible to ensure healthy eating.

Planted-Based Eating Is Better for the Environment

Human-created greenhouse gas emissions — the leading source of the climate change crisis — come from a variety of sectors: energy, industry, building, and transportation are among them.

But food production is also a factor.

“We are on a path leading to ecological disasters and a sick and unstable global population,” he warned.

He added that the most massive improvement to health and the environment would come from stopping the practice of feeding grains to animals set for slaughter, and instead eating those grains and plants ourselves.

Schrag, the climate guy, cautioned that due to the lengthy time scales associated with climate issues, the unfortunate news is that people’s actions already have committed the planet to centuries of warming — even if people magically stopped all their malignant practices today.

“I think it’s important to be honest as a scientist,” he said. “It remains possible, even likely, that global efforts will fall far short of what is required to prevent massive suffering, both by human societies and by the natural world.”

But then he quoted Darwin, the famous scientist who noted the most adaptable species will survive. People, Schrag added, are “really good” at adapting.

In other words: The situation is urgent. But it’s not completely hopeless.

Schrag pointed to COVID-19 as an example of how human habits can massively and drastically change. A year ago, he wouldn’t have believed it possible for people — globally — to “shut down” their lives: to limit travel, recreation, and other socializing for nine months or more.

But with the pandemic, that’s happened.

“We’ve seen, with COVID-19, an incredible change driven by unexpected consequences,” he said. “As climate change ramps up, the kind of behavior that seems impossible will become the new reality.”

Reiley, the Washington Post reporter, said that about 50 million people in the United States are “food insecure” — a term used to describe people who don’t have reliable access to healthy, affordable food.

In communities where the nearest “grocery store” is a dollar store, plant-based options are often limited, she said.

But Willett noted that public assistance programs, like SNAP and WIC, cover vegetables and healthy options. He said the biggest factors he’s found that are holding back people — including those from low-income communities — from eating more plants is not a lack of money, but a lack of knowledge. People often don’t know how to prepare vegetables or make them taste good, he said.

Reiley added that many people in today’s fast-paced and time-crunched world also shy away from plant-based recipes that require hours of preparation, such as cooking fresh beans.

But those setbacks are not insurmountable.

Willett said studies have shown that plant-based eating, in the long run, can actually be much less expensive than purchasing animal-derived products.

And while plant-based alternatives, such as the “Beyond Burger,” remain too expensive currently for the everyday person, that’s also likely to change as demand increases, he said.

Meanwhile, other alternatives — like the 3D printing of meat — are emerging. The scientists on the call didn’t heartily recommend eating 3D-printed meat — although animals don’t pump out methane gas in the process, plants still have better benefits, they said — but it’s another glimmer of hope that people will find a way to save ourselves — and our precious planet — before it’s too late.