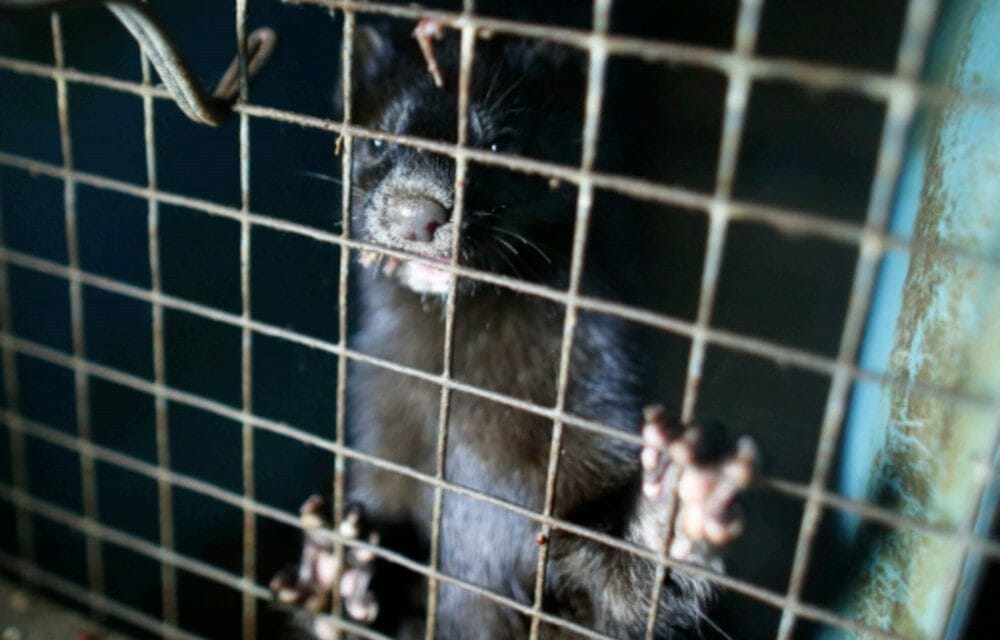 Despite an increasing number of COVID-19 outbreaks among its farmed mink population, the U.S. government doesn’t know where all of the country’s fur farms are located or who should be overseeing them, according to an alarming new report from Born Free USA.

The United States has had at least 16 known outbreaks of COVID-19 on mink farms since the pandemic started. What’s astonishing — in light of COVID threatening the health and safety of millions of Americans, and the virus’s known ability to “jump” from mink to humans and vice versa — is that our country’s leaders and regulatory agencies haven’t shut fur farms down.

Even more shocking is that they don’t know where all of them are.

A recent report, published by the animal rights and research group Born Free USA, found an alarming lack of legislation, licensing, regulation, or animal care guidelines of the known 245 U.S.-based fur farms.  Among their findings:

Who Is Responsible for Overseeing U.S. Mink Fur Farms?

Researchers also found that even regulatory agencies in states with regulations in place didn’t always know who was responsible for inspections.

Liz Tyson, the programs director for Born Free USA, laid out what that means for Americans everywhere.

Mink at commercial fur farms are kept in cramped and often filthy wire cages, where they barely have enough room to move around and are often denied any type of exercise or veterinary care. They suffer painful deaths, usually via poisonous gas, cervical dislocation, or electrocution through the anus.

The stressful conditions make them more susceptible to disease, and the close contact with each other and with workers affords a perfect opportunity for COVID-19 contagion to spread.

To date, COVID-19 has infected more than 25.6 million Americans and killed nearly 432,000 people, according to the latest data from the Centers for Disease and Control. The known outbreaks on fur farms — spanning Utah, Wisconsin, Michigan and Oregon — have infected both nonhuman animals and their human caretakers.

Several European countries have banned fur farming already, and several others — triggered by climbing numbers of COVID-19 in their populations —  have cracked down on the industry.

Why Should the U.S. Ban Fur Farming?

“American citizens need to start asking very serious questions on whether they should still allow a disease reservoir to persist, purely because a minority, a very small number of farmers, want to cruelly produce an animal product which no one actually needs,” Swabe said.

Tyson took the time to discuss the main issues more in-depth with Lady Freethinker. Her answers have been edited for length.

Before jumping to that fascinating interview below, sign Lady Freethinker’s petition to ban cruel fur farms, if you haven’t already.

Lady Freethinker (LFT): What should people know about COVID-19 and mink farming?

Liz Tyson (LT):  What we know is that COVID-19 — and other diseases such as SARS, Ebola, and swine flu — are what are known as zoonotic diseases. Those are diseases that can pass from non-human animal species to humans, and vice versa. The conditions in mink fur farms invariably see animals packed in high densities into small spaces, with poor sanitation, and little to no veterinary oversight. Much like the “wet markets” which are considered to be the original starting point for the current pandemic, this creates prime conditions for disease to develop and spread. In turn, this can result in disease passing from the animals to the human workers and, subsequently, pose a threat to the wider human population.

The problem is that the industry in the United States is so poorly regulated, with such little oversight, so even if the authorities were open to taking decisive action – which they have shown no inclination towards to date – many states don’t even know if they have fur farms within their jurisdiction. As such, the absence of information on the spread of COVID across fur farms in the United States is not indicative of an absence of the disease, but simply a lack of information, period. With hundreds of thousands of deaths from COVID in the United States, and the virus still spreading at an alarming rate through the human population, we believe that any risk should be treated seriously.

LFT: Why has mink and other fur farming in the United States remained a “hidden” industry?

LT: At least 34 states do not have comprehensive fur farming regulations and many have no regulation whatsoever in dealing with animal welfare. While we were conducting our research, some states did not know which of their departments had jurisdiction over fur farms, much less whether they had any fur farms within their state boundaries. We believe that part of the problem is that there has been little public pressure on authorities to take fur farms to task on their operation. Many U.S. citizens are surprised to learn that there even is a fur farming industry here, as fur production is most commonly associated with Europe, Asia, and Canada. It really does seem to be a case of “out of sight, out of mind.” And that is something that we are tackling with our work.

LFT: Why is a complete ban on fur farming in the United States the only viable solution?

LT: Put bluntly, there is no kind way to raise and kill an animal so we can wear their skin.  I think we also need to be very wary of calling for improvements in conditions as a step towards eventual banning. It is often the case that, if we find ourselves in a moment where there is political appetite to consider legislative change on an animal welfare issue, we need to take the opportunity to call clearly for what is needed. While the idea of gradual steps towards change may seem logical, in practice, we may only get the issue on the table once and, once a change has been made, it is easy for politicians to feel that it has now been “dealt with.” In a world where there are so many competing legislative issues that are struggling to get time to be heard, the idea that we may take one step now and another in a year or so often isn’t realistic. If we have the chance to end this industry once and for all, we must take it.

There is no way of continuing to farm animals for their skins while adequately controlling the risk of disease spread. You could insist that animals are seen by vets, or you could improve hygiene, but even a complete overhaul and restructuring (both physical and operational) of the industry would still fundamentally require large numbers of wild animals to be managed in unnaturally close contact with humans.

LFT: Given the known cruelty to animals, why are people still wearing fur?

LT: Fur is still seen as a status symbol for some. It is perhaps, in part, a generational issue, and the decline of the industry may be in part to fur not generally being something that younger generations aspire to own. I also think there is an element of it now being something that is somewhat taboo – the idea of going against the grain is something that will always appeal to some people. Also, while I believe it is barbaric and I, personally, cannot see a fur coat without seeing the animal to whom that skin belongs, fur is beautiful. I guess for some people, the aesthetic is simply more important than the lives taken for that item to exist.

There is also the issue of fur trim. Many people might not even realize that the fur on their clothing is real, assuming that it is faux fur. Alternatively, they may feel that such an insignificant amount of fur is not the same as wearing a full fur coat made up of the skins of dozens of individual animals. What they perhaps don’t realize is that fur trim makes up as much as half of all fur products. So, taken collectively, the issue of fur trim as a category of fur wearing is far from insignificant.

LFT: What can people do to help stop fur farming?

LT:  They can support organizations like ours. Signing up to our e-alerts is a great way of keeping in touch and being the first to know about important actions you can take in your area. This is particularly important when we work at state level to impact policy and legislation, as we need to be able to mobilize constituents to contact their representatives. If you have the means, donating to organizations like ours working to end fur farming is always welcome. Of course, not wearing fur, being conscious of how to differentiate between real and faux fur, and encouraging families and friends to ditch fur from their wardrobe are simple things that everyone can do to help curb this cruel industry.