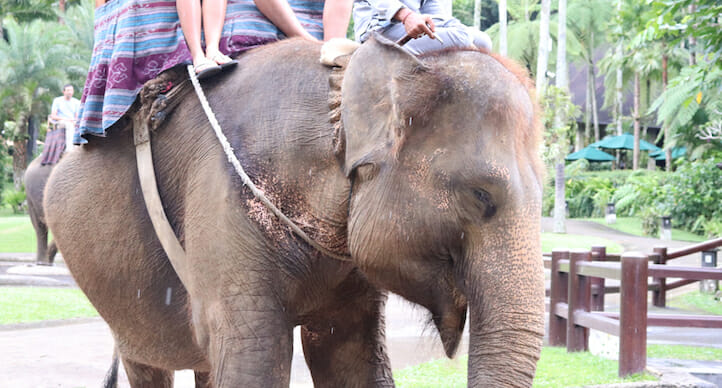 In a hard-earned victory for relentless animal advocates, the United Kingdom is moving to ban tourism advertisements for venues that promote elephant torture.

The Department of Environment, Food, and Rural Affairs said the advertisement ban would apply to tourist venues that promote all forms of cruelty for endangered Asian elephants, including elephant rides, washings, tricks, and other forms of direct interaction with human visitors, according to the  Telegraph.

Duncan McNair, an attorney and founder of London-based nonprofit Save The Asian Elephants (STAE), has been fighting for the ban for years. McNair said people often aren’t aware of the brutal treatment — from beatings with bullhooks to stabbings and blindings — that elephants endure to become “tame” enough for commercial exploitation in tourism.

“Elephants are wild animals,” McNair told Lady Freethinker. “If they allow you to walk up to them and pet them, or hop on their backs, those animals have been brutalized.”

The process — known as phajaan or pajan — translates to “breaking of the spirit” and has been increasingly denounced, including by the UK Prime Minister’s fiancée.

STAE drafted the ban on advertising venues that promote elephant cruelty and also started a petition, which since has garnered more than 1 million signatures of support worldwide.

McNair said he’ll be watching closely to ensure the ban is enacted and enforced.

“We have come a long, long way, and hope desperately that the government does what it says it will do,” he told Lady Freethinker. “This action has come in part from an enormous show of public support, which is necessary to create legislative change.”

“The United States now becomes absolutely critical in what happens  next,” he said. “We believe strongly that it could, itself, introduce such legislation.”

5 WAYS TO HELP SAVE ASIAN ELEPHANTS EXPLOITED IN TOURIST TRAPS

5. Get involved. STAE greatly welcomes new volunteers, many of whom work remotely and tirelessly for the cause by researching, writing articles, organizing information archives, or helping out with social media and outreach. Email [email protected] for more information.