(Courtesy of Save the Asian Elephants. Photo Credit: Lek Chailert)

Scientists estimate that fewer than 30,000 Asian Elephants remain in the wild under huge pressure from habitat loss and poaching for tourism and ivory— sobering numbers that are pushing the highly-intelligent and empathetic animals to the brink of extinction. Despite their endangered status, people capture thousands of Asian elephants and force them into brutal, degrading, and often deadly “entertainment” for tourists.

Save The Asian Elephants (STAE), a London-based nonprofit, drafted the ban on advertising venues that promote elephant cruelty and also started a petition, which since has garnered more than 1 million signatures of support worldwide.

The nonprofit’s CEO Duncan McNair said a confluence of factors — including a receptive government, growing public awareness of the horrific cruelty elephants endure in temples and tourist destinations, and elephants’ vulnerability to catching and spreading COVID-19  — created an ideal opportunity for the recommended ban.

“We have presented enormous amounts of evidence to show the abuse is widespread, it is extreme, and that elephants are nearing extinction in our lifetime,” McNair told Lady Freethinker. “We have a government that is receptive. They have given us a lot of time, and I do believe they are taking it seriously, for which we are so grateful.”

McNair has traveled to temples and “sanctuaries” worldwide — including in India and Thailand — where he has witnessed the brutal breaking of wild elephants’ bodies and wills so they submit to degrading behaviors, such as performing tricks or giving “rides” to tourists.

The ruthless process starts with people snatching wild infant elephants from their mothers, who are most often killed for trying to defend their babies. The baby elephants are then caged, tethered, starved, stabbed with knives and nails, and beaten with rods, chains, and vicious bullhooks in a practice known as ‘phajaan’ or ‘pajan’ – a Hindu word that literally means ‘breaking of the spirit,’ McNair said.

“I have seen elephants with great chunks ripped out of them. Elephants stabbed under their toenails. Elephants standing on heaps of mess and rotting food, and they get septic and fall over,” he said. “I’ve looked into the eyes of these elephants, and they are silently screaming at you for help.”

McNair spoke with Lady Freethinker about the importance of the ban and life-saving steps that everyday people can take now to help save endangered Asian Elephants. Interview with Duncan McNair of Save The Asian Elephants (STAE)

Why is a ban on advertising elephant cruelty venues needed? Why now?

McNair said that UK-based travel agencies are promoting thousands of abusive venues, including seven considered the most violent. Asian elephants’ dwindling numbers, combined with the brutal abuse they endure to break them to people’s will, make immediate action necessary, he said.

“We can’t control how animals are treated abroad or regulate foreign markets, but we can influence the consumption habits of our own citizens in the United Kingdom,” he said. “We can influence what our UK consumers buy and what they are exposed to, and any facility with the characteristics of cruelty should not be advertised.”

There’s also a health factor. Elephants have contracted and passed along zoonotic diseases, including tuberculosis and SARS.  Research suggests that immune-compromised elephants, kept in close confinement to other elephants and people, could contract and spread COVID-19, which scientists believe spreads primarily through infected respiratory droplets, such as from sneezes and coughs.

“Elephants cough, they sneeze, they spray water,” McNair said. “On top of that, when you have these broken-down elephants that people are riding, and taking selfies with, you create a perfect storm [for the spread of zoonotic diseases].”

Only visits to genuine sanctuaries and wildlife reserves, where tourists observe elephants at respectful distances, should be advertised by the Association of British Travel Agents and its members, he said. How can people spot the difference between a true elephant sanctuary and an unethical, cruel vacation spot?

Every elephant brought into captivity, “pretty much without exception,” experiences cruelty, McNair said. A venue labeling itself a “sanctuary” is no guarantee that animals are treated well, he added.

“A ‘sanctuary’ is an elastic term,” McNair said. “Most places are not actually sanctuaries. If elephants are being observed from a respectable distance, in a herd environment and in a natural environment, that’s a good start to the venue being a genuine sanctuary.”

Signs of abuse include elephants crammed together, with no access to food or water, and who are carrying injuries — including scars or stab wounds around their feet or chunks of flesh missing from bullhook wounds. Elephants whose eyes are a milky color likely have been blinded as part of their abuse, McNair said.

One example of what McNair dubbed a “good” elephant park is the Elephant Nature Park in Thailand. To make sure you’re avoiding the worst of the parks out there, don’t miss our action steps at the end of the story.

A stick placed upside the elephant’s head, should it drop to the ground he will be beaten with it. (Courtesy of Save The Asian Elephants. Photo Credit: Louis Wood)

Do you expect challenges to the proposed ban? Alternately, what message would the UK be sending to the world by passing the ban?

McNair said the people of faith he has talked to who became aware of the horrific abuse elephants endure in temples unanimously oppose the continued practice. Nothing in the Hindu religion dictates killing, stabbing, or brutalizing animals, he said.

“Quite the opposite,” he said. “I have a huge respect for the Hindu faith, which is a peace-loving system. What goes on with the elephants in these temples is an absolute repudiation of the Hindu faith.”

He anticipates pushback from the travel and tourism agencies, although he added the ban has received a small amount of support from some very good travel companies.

If the British Parliament agrees to support the ban, the country would be sending a powerful message to the rest of the world, he said.

“We can be very proud if we pass this legislation for this ancient species,” he said. “It would send a very positive message to the world, not only about the Prime Minister, who has a good intuition for animal welfare, but it can also show that Britain can stand proud in the face of the world, and say that we have done what is right while there is still time.” 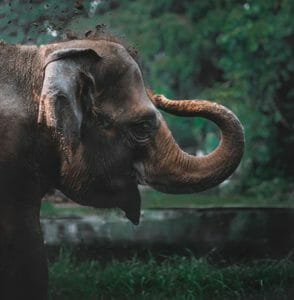 (Courtesy of Save The Asian Elephants. Photo Credit: Iswanto-Arif)

5 Ways To Help Save Asian Elephants Exploited in Tourist Traps

1. Sign Save The Asian Elephant’s petition and ask the British government to support the proposed ban on tourist agencies’ advertisement of venues that promote animal cruelty.

2. Write to your lawmakers and educate them about elephant cruelty issues. STAE has letter templates available on its website that can easily be modified to fit your country.

5. Get involved. STAE loves its volunteers, many of whom work remotely and tirelessly for the cause by researching, writing articles, organizing information archives, or helping out with social media and outreach. Email [email protected] for more information.