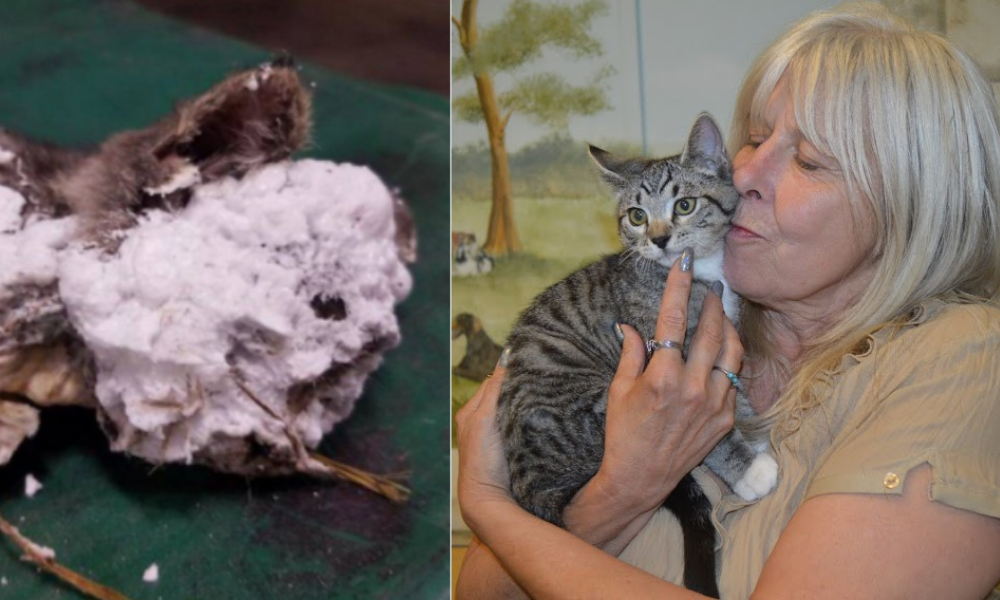 An 8-week-old kitten found in a trash can encased in spray foam has been adopted into a loving forever home with Denise, a vet tech who fell in love with the kitten while he was recuperating at Hillsboro Veterinary Hospital. (Images Courtesy of Bonnie Hays Animal Shelter)

Lucky McFoamy, a tiny gray tabby kitten found encased in suffocating spray foam and clinging to the inside of a garbage can in Washington County, Ore., celebrated his birthday in style this Saint Patrick’s Day.

Denise, a vet tech at the Hillsboro Veterinary Clinic, fell in love with the tiny kitten while he was recuperating there. After adopting him, she named him “Lucky.” Then, to make his name really Irish, she added the “McFoamy” and set his new birthday, near the date of his rescue, as St. Patrick’s Day.

She told Lady Freethinker that Lucky had a very special birthday, with a new laser light (which she said he loves to chase) and other new toys, since he “loves whacking things around the house.”

The kitten, despite the brutal treatment in his early days, is now thriving.

“He is a little lover,” Denise said. “He has to be right where I am. He’ll follow me into the bathroom, he’ll climb up on the counter, he follows me around everywhere.”

Once a month, Lucky also visits the Hillsboro garbage workers and the Bonnie L. Hays Animal Shelter staff who helped save his life, she added.

Lucky’s journey from death-to-life started in May 2019, when a garbage collector making his rounds noticed a trash can wasn’t emptying. Upon investigating, the worker found the 8-week-old kitten hanging upside down from his back legs, his entire head covered by the solidified foam and otherwise unable to move.

Workers picked away the foam and rushed the kitten to the Hillsboro Veterinary Clinic for treatment. Meanwhile, the Washington County Sheriff’s Office launched an investigation to find the animal abuser.

“We followed up on every lead we had but were unable to connect anyone to the crime,” van Kleef said. “If any tips were to come forward, we could still reopen the case, but so far, we haven’t had any come in.”

We want to thank the more than 31,000 supporters who signed our petition demanding justice for the kitten, which we sent to Washington County Sheriff Pat Garrett.  We also want to thank the Washington County Sheriff’s Office for taking the case seriously and conducting a thorough investigation, and the Hillsboro garbage workers for taking the time to save this tiny kitten.

Although we’re disappointed that a perpetrator in this case couldn’t be found, we are overjoyed that Lucky McFoamy has been adopted into a loving forever home.

Stacy Beckly, an outreach coordinator for Bonnie Hays, told Lady Freethinker that Denise was the clear choice when it came to finding an adoptive home. Although there was quite a line of people asking to adopt the kitten, given media coverage of the incident, Denise was one of the first people to see and treat the kitten. She also had a pet-friendly home with two other cats and a dog who quickly befriended the new arrival.

“We feel great about his new home, and the second chance he was given,” Beckly said.

Lucky landed a featured spot in the shelter’s Fall/Winter 2019 “Animal Tales” newsletter,  in which Denise provided a positive update about the kitten’s progress.

She reported that Lucky’s whiskers had grown back, and he had more than doubled in weight, to 8.3 pounds.  He enjoyed watching Seahawks football on TV and playing with his miniature football toys, and he also was getting along great with his housemates — including cat buddy Percy. 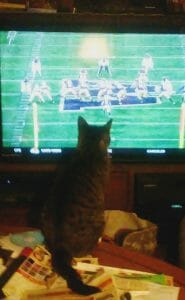 Lucky also had been back to visit the garbage workers who had helped save his life, although he remained shy around people, Denise added.

“He follows me and is snuggly with me, but he’s hesitant with other people,” she said. “It takes awhile for him to trust someone.”

Denise has kept a scrapbook of Lucky’s “firsts” since he arrived at her home. She has pictures of his first Thanksgiving, where he poses with a little stuffed turkey toy, and pictures of his first Christmas with Santa. She plans to put copies of the scrapbook up for sale when it’s finished, as a way for Lucky’s fan club to share in his story. All proceeds will go to the Bonnie Hays shelter for care of animals, she added.

Lucky’s story is an important reminder of the need for people to take the time to notice — and report — animal abuse and that animals rescued from horrifying cruelty can have happy endings when people step up and care. 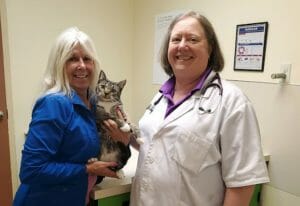