SIGN: Justice for Kitten Smothered in Spray Foam and Dumped in Trash 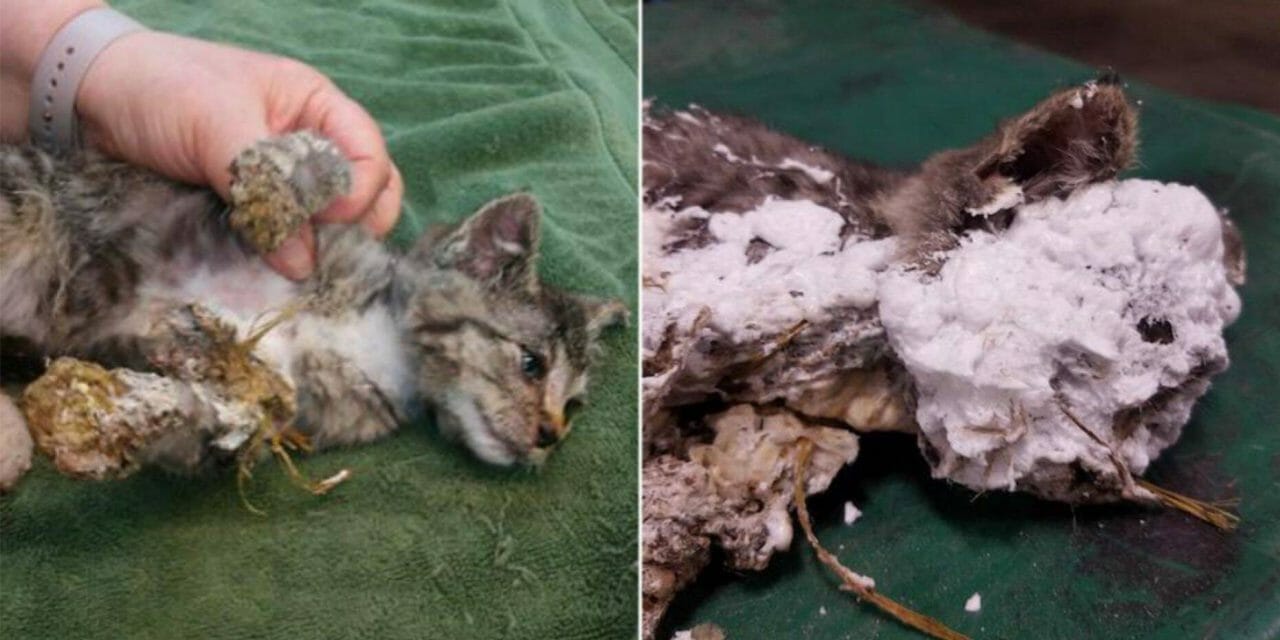 UPDATE (3/17/2021): We’re happy to report that this tiny kitten, found encased in spray foam by a garbage collector and rushed to Hillsboro Veterinary Clinic for treatment, has been adopted by vet tech Denise and is thriving in his new home.  Unfortunately, deputies couldn’t track anyone to the crime and the case is now suspended, a sheriff’s spokesperson told Lady Freethinker.

“We followed up on every lead we had but were unable to connect anyone to the crime,” said Deputy Brian van Kleef said. “If any tips were to come forward, we could still reopen the case, but so far, we haven’t had any come in.”

We want to thank the more than 31,000 supporters who signed our petition demanding justice for the kitten, which we sent to Washington County Sheriff Pat Garrett.  We also want to thank the Washington County Sheriff’s Office for taking the case seriously and conducting a thorough investigation, and the Hillsboro garbage workers for taking the time to help this tiny kitten.

A cruel individual sprayed an eight-week-old kitten over the face and body with foam before heartlessly dumping the poor creature in a trash can in Washington County, Oregon.

A garbage collector discovered the terrified kitten as the worker did his rounds on May 3. When a trash can wouldn’t empty, he investigated, finding the cat hanging upside down from the back legs, covered in foam and unable to move. He knew the cat was still alive as he could hear pitiful cries.

Staff at the garbage disposal facility worked to remove the solidified foam before taking the cat to the Hillsboro Vet Clinic for further treatment. A vet at the clinic told FOX12 that the kitten’s entire head and face were covered with foam; if the cat had not been rescued, he would likely have suffocated.

This innocent kitten is lucky to be alive; whoever did this is clearly dangerous and needs to be caught before they hurt, and potentially kill, any more animals.

Sign this petition urging Washington County Sheriff Pat Garrett to use every resource to find the person responsible and prosecute them to the fullest extent of the law.

Anyone with information about this crime is asked to contact Cpl. Brandon Talbott at the Washington County Sheriff’s Office on 503-846-2700.