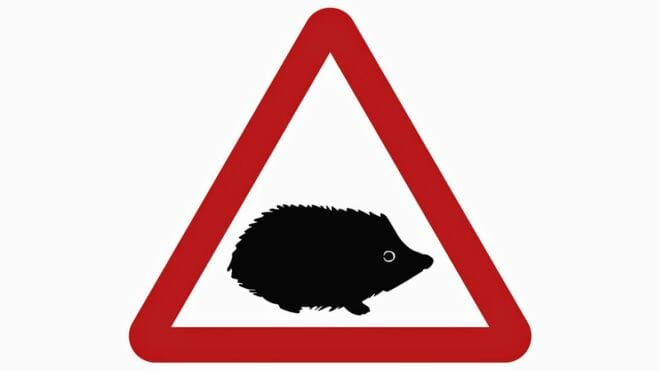 The Department for Transport (DfT) in the UK has introduced a new road safety sign featuring the image of a hedgehog in a bid to protect small mammals, as well as drivers, from being injured and killed.

Transport Secretary Chris Grayling launched the signs, designed to warn drivers of the potential hazard of animals in the road, on 17 June. Local authorities will place the warning signs in areas with a high concentration of wildlife — such as hedgehogs, badgers, otters and squirrels — as well as accident hotspots.

The DfT says the small wildlife signs will plug an existing gap between other wildlife road signs already in use in the UK that warn about the hazards of smaller animals such as toads and wildfowl, and larger mammals like deer.

“We have some of the safest roads in the world, but we are always looking at how we can make them safer,” commented Grayling. “Motorcyclists and other vulnerable road users are particularly at risk. The new small mammal warning sign should help to reduce the number of people killed and injured, as well as helping our precious small wild mammal population to flourish.”

In its latest figures, the DfT has revealed that between 2005 and 2017, 100 people were killed in road traffic accidents involving animals, with an additional 14,173 people being injured in such incidents.

Hedgehog numbers have declined dramatically in recent years, with the UK losing about a third of its hedgehog population since the year 2000. This is due to a variety of factors including road collisions, pesticides and loss of natural habitat.